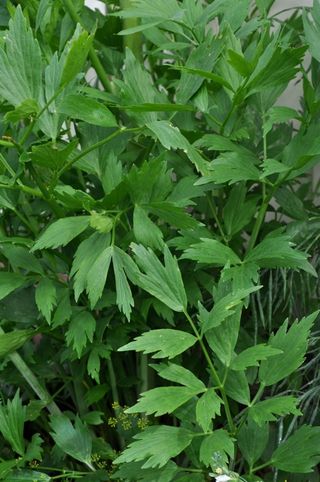 In a previous post I mentioned the beautiful lovage (levistico) that I have in my herb garden.The plant is now over four feet tall and looks simply gorgeous. The photo shows just a detail of the copious foliage.

The need to use some chicken stock from a batch I had previously defrosted and the presence in my vegetable bin of two beautiful, dark green zucchine (zucchini) from the farmers' market suggested the word "soup" to me, and I heeded the suggestion. Before starting to make the soup, I cut a stem of lovage.

I can't say I measured or weighed the ingredients: I just went with what I had in the quantity I saw fit. I warmed up some olive oil in a saucepan and added to it:

The lovage stem was fairly thick and about 8" long. While I was chopping the deep green stem, I was reminded that lovage has an intense flavor: "a little goes a long way."

After all the vegetables had been added to the saucepan, I sprinkled some ground cumin (cumino), stirred well, put the lid on the and let the vegetables cook until soft, stirring occasionally. I then added:

I brought to a boil and let the soup simmer, covered, until the zucchini were cooked.

With the precious help of my immersion blender, the vegetable mix turned into a creamy soup (passato). The consistency was to my liking, i.e., rather thick. I tasted the soup to adjust sale e pepe (salt and pepper) and my taste buds told me that the flavor of lovage was just right: distinct but not overbearing. Had I needed a bit more, I would have added some of the leaves I had set aside. 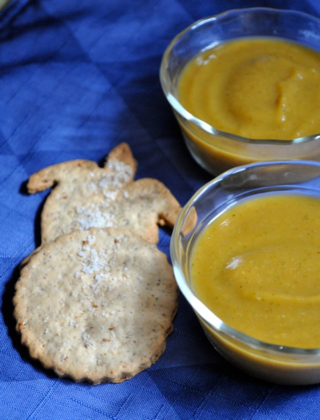 For the photo op, I put some soup in glass ramekins and accompanied it with some special crackers whose recipe (which I have already made three times) will be the subject of a future post.

I really enjoyed the passato di zucchine, so much so that yesterday, at the farmers' market, I bought some zucchini with the stated intention of making it again. Having lovage in my herb garden means that I can experiment with it any time I wish.

This is my contribution to edition #242 of Weekend Herb Blogging, an event started by Kalyn of Kalyn's Kitchen, now organized by Haalo of Cook (almost) Anything at Least Once and hosted this week by Susan of The Well-Seasoned Cook.

Though I know what lovage is, I have never, ever eaten it. Now I am feeling sorry for myself.

This is a beautiful original soup, Simona - so colorful and healthy. And do I spot a turtle there? Charming and tasty. I've yet to bake homemade crackers, so am really looking forward to your recipe.

Thank you for sharing with WHB!

I'm so glad you have lovage in your garden Simona. I used to grow it in the Sacramento valley but have never tried it here. Your soup looks wonderful! BTW - we just arrived home. :)

Hi Susan. It was, as usually, my pleasure. I recommend you try lovage, if you find some. Indeed, I made turtle-shaped crackers, just for fun.

Ciao Christine and welcome back. Given my lack of consistency in terms of gardening, I need plants that can take care of themselves and so far my lovage has shown a remarkable ability. We'll see what happens in the future. I definitely have more than I can use, so you are welcome to get some.