Novel Food #10: the finale (one serving)

About a month ago, Lisa of Champaign Taste and I announced the 10th edition of Novel Food, the literary/culinary event that we created two and a half years ago, as a result of a lively exchange of messages about the novels, whose protagonist is Inspector Salvo Montalbano. Readers of those novels relish not only the distinctive style the Sicilian police inspector brings to his job, but also his passion for good food.

Novel Food is about literary works (prose or poetry) that inspire the preparation of dishes. Like all its predecessors, the current edition presents an interesting set of both readables and edibles, of which I will introduce half. Please, follow me on a short literary tour. 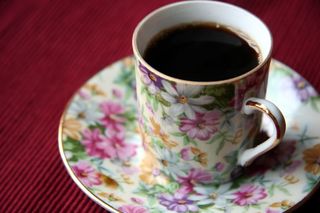 A demitasse of Turkish coffee opens our presentation with its distinctive aroma. In fact, Ruhama of rumahama has been inspired by Little Brother by Cory Doctorow to make Turkish coffee, which Marcus, the novel's protagonist, describes as "mud, pretending to be coffee." His is not exactly the perspective of an expert, but of a teenager who wants caffeine to stay awake in school, after spending the night at his computer.

Ruhama has a different opinion: "Oh, for a scratch-n-sniff blog! The whole house smelled lovely while this was boiling." 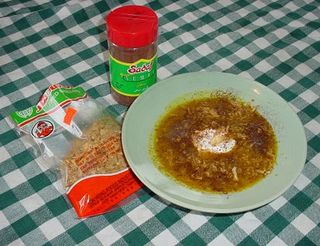 Rachel, The Crispy Cook offers us not one, but two novels, Pomegranate Soup and the sequel Rosewater and Soda Bread by Marsha Mehran. The novels tell the story of "three Iranian sisters who flee their native country after the Islamic Revolution for the small Irish town of Ballinacroagh."

A recipe for red lentil soup in the first novel inspired Rachel to prepare "a batch of comforting" Persian Lentil Soup with Sumac and Yogurt as part of a Middle Eastern meal: "a winning recipe." 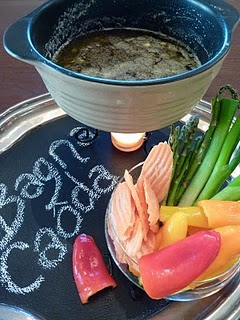 Sandi of Whistlestop Cafe Cooking introduces us to the autobiography of Marcella Hazan, Amarcord: Marcella Remembers. In it, Hazan "talks about growing up in Italy during the war, her studies as a scientist, and then later coming to America without knowing any English."

Sandi is part of a group of people (Pomodori e Vino) cooking their way through Hazan's Essentials of Italian Cooking and posting it daily on Facebook. She shared with us her experience in making Bagna Caoda, "a dip of olive oil, butter, garlic and fresh anchovy fillets, served with the freshest raw vegetables." 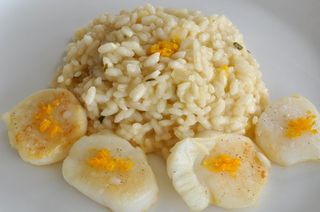 Simona of briciole (that would be me) read Back to Bologna by Michael Dibdin, and found herself reading about Futurist cuisine and Futurist banquets. A dish served at one of those banquets inspired her to prepare risotto all'arancia, another exploration (for her) of risotto paired with fruit.

Simona's version is quite different from the original, among other reasons because it was served with pan-fried scallops. She has since made risotto al salto with leftovers and the result was appreciated at the table. 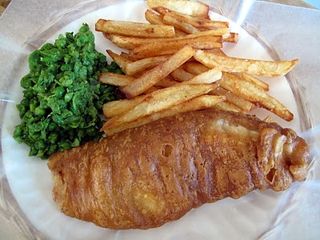 My event partner Lisa of Champaign Taste read Never Let Me Go by Kashuo Ishiguro and found it powerful and haunting. The main characters of the novel are students at an exclusive boarding school in the English countryside.

"Frying smells" at a seaside cafe where they stop for lunch inspired Lisa to make Fish and Chips, according to a recipe "written it down on the back of an envelope in 1952." The result was "a smashing success."

You have not one, but two reasons to go over to Lisa's blog now: to read the details of her submission for the event, and to enjoy her portion of the roundup. Many thanks to all who contributed to our event and to my partner Lisa.

The next edition of our event will be in the summer: we will announce it on our blogs and on other venues, so stay tuned. In the meantime, read good books (maybe with the next Novel Food in mind), cook good dishes, and otherwise savor life's offerings. Arrivederci!

Posted by Simona Carini on April 19, 2010 in Novel Food | Permalink

All the food looks delicious and I must read all of these books! Thank you for hosting this lovely event- I enjoy it very much.

I just bought a copy of Amacord recently, so now I am really looking forward to reading it. Thanks for hosting this fun event.

Yummy! My food and book list has, of course, grown once again. Thanks for a great roundup.

Hi Rachel. You are welcome.

You are welcome, Ruhama.

Thanks to all of you for participating.

So sorry I missed this, Simona. Easter break with visiting relatives was much more extended and busy than I had anticipated - lost all track of time. I look forward to visiting the participating posts, and popping over to Lisa's blog, too. Thanks always for hosting. I do expect to join in the Summer Edition.

Oh I love the risotto! Thanks for hosting! :)

Hi Susan. I imagined that something was keeping you busy. We look forward to having you join the summer edition.

You are welcome, Ginny.

Hi!!
I am bit late for this event for I recently cooked something which reconnected me to a poem, a nursery rhyme I used to humm in my childhood days.Anyways there is always a next time.

Thanks for visiting. There will be another edition of the event in early summer. I hope you'll participate then.