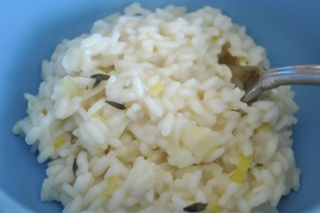 The 2010 March Daring Cooks challenge was hosted by Eleanor of Melbourne Food Geek and Jess of Jess the baker. They chose to challenge Daring Cooks to make risotto. The various components of their challenge recipe are based on input from the Australian Masterchef cookbook and the cookbook Moorish by Greg Malouf. The recipes are available here.

I make risotto very often and I like to create variations on the theme, as it can be inferred from the recipes I have posted in the past: risotto ai lamponi (raspberry risotto), risotto alle more (blackberry risotto) and risotto integrale al pomodoro e salvia (whole-grain risotto with tomato and sage). The challenge for me this month was to find the time to make the chicken broth (brodo di pollo), as my schedule was quite hectic. I was resigned to excuse myself, when a sliver of time opened up and I booked it for broth-making.

To make my life a bit easier in terms of preparation, I bought several pieces of organic chicken instead of a whole bird (two whole legs, a bone-in breast, a back). I also bought a small piece of beef to add to the chicken, like my mother does to make her broth (brodo di carne). I had all the vegetables at home: onion, carrot, celery. To those, I added a piece of leek (I removed the leaves and used the top of the green part, leaving the white and pale green section for later use), a couple of sprigs of thyme, 6 or 7 stems of parsley (both herbs grow plentiful in my small garden: the photo below shows a detail of the thyme plant from which I harvest most often), two bay leaves and a 2-inch piece of lemon peel. I had never used the latter before, but saw it in the recipe chosen for the challenge and liked the idea. I did not use any other spice. 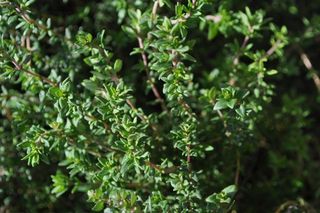 After I added the vegetables, I simmered the broth for a little over 1.5 hours, then removed the pieces of chicken and boiled the rest for another half hour. I turned off the heat, put the chicken meat back into the broth and let it cool a bit. Finally, I strained the broth, setting aside the meat and discarding skin, bones and vegetables. I will use the boiled meat for a dish that my mother used to prepare and that I loved as a kid (a story for another day). I divided the broth into two containers, let it cool completely, then put it in the fridge. The morning after, I removed the layer of fat from the surface. A set of engagements prevented me from making the risotto until the last minute (l'ultimo minuto), that is, yesterday.

I prepared risotto ai porri (leek risotto), because it's one of my favorite variations on the theme of risotto and I had the leek partially used to make the broth. After warming up the saucepan and warming up olive oil in it, I cooked the white and pale green part of the leek sliced into half-moons until it was soft. To the leek, I added the leaves from a couple of thyme sprigs. I used Carnaroli rice, which I favor over Arborio. I added white wine and then the simmering broth as usual (see recipes mentioned above for the details). Once the risotto was cooked, I added salt to taste and a couple of tablespoons of my homemade cream cheese then stirred with a bit of energy to distribute the cheese. I find that the flavor of the cheese pairs well with that of leeks and its creaminess rounds out the risotto well. After a few minutes of rest, I served the risotto. I usually don't measure ingredients when I make risotto, with the exception of rice (one cup) and broth (three cups). The guiding principle for me is that this is a rice dish, so the rice is the protagonist.

You will find a lot of personal interpretations of the beloved Italian dish, when you browse the creations of my fellow Daring Cooks. A special thank to Eleanor and Jess for the nice challenge.

Risotto with leeks and cream cheese sounds delicious. I'm glad you found the time to take part in the challenge -- and to do everything from scratch, no less. I'm also interested in the idea of putting lemon peel in when making chicken/meat broth. I'll have to try that next time. And you used both chicken and beef in the broth; I've never done that before.

Your risotto looks lovely and creamy. I have never used leeks in my risotto but now I've seen a couple of recipes like this so I'll have to try. I make risotto often and my family enjoys it. Also your cream cheese looks interesting.

Ciao Lisa. I think that mixed meat broth has a nice flavor. Let me know if you try to make it.

Ciao Marcellina. I am glad my recipe has given you an interesting suggestion. I hope you'll like the resulting risotto.

They ypped the ante by having you make your own stock. I love seeing all of these delicious risottos out in the blogosphere.

Your risotto sounds wonderful especially having your own cream cheese in it.

WOW you seem very knowledgeable about risotto and thank you for the Italian words for all your creations. That risotto is to die for it looks so creamy and scrumptious. Well done on this challenge. Leeks and cream cheese I think you are on a real winner here and you so lucky to have so many fresh herbs available in your own backyard. Bravo, cheers from Audax in Sydney Australia.

Cream cheese and leeks - what a lovely pairing. And I like the idea of a bit of beef in the stock. I need to lighten my risottos a bit... I tend to end up throwing in all the leftover bits and having a main course rather than a rice dish....

Ciao Valli. That was really good as making broth is not difficult, more a question of time management, in my opinion.

Ciao Ivy. I must admit I feel a certain amount of pride when I use some of my cheese in a recipe.

Ciao Audax. I have been making risotto for a number of years, and I enjoy it. Also, I have yet to find someone who does not like it, so it's a great choice for a dinner with guests.

Ciao Katie. In Italy, risotto is served as a starter, so that is what I am used to. Come to think about it, I should make saffron risotto soon. It's so cheerful.

Risotto is one of my favorites. Anyway, anykind, anythyme!

Ciao Sandi. Indeed, risotto is a dish for all seasons.