Last December, I bought a package of Propionibacterium freudenreichii subsp. shermanii, since I had decided that I wanted to make some cheese with holes (formaggio coi buchi). The holes are called "eyes" — which I think is a nicer name — and are bubbles of carbon dioxide created by the microorganism just mentioned during the ripening period, as you can read here and also here.

For my first attempt, I chose a recipe for Leerdammer from the book 200 Easy Homemade Cheese Recipes by Debra Amrein-Boyes. The main reason behind the choice was the shorter time of ripening, which would have allowed me to look at and taste the result within a reasonable time frame. When making cheese that requires aging, one has to keep in mind the time lag between the making and the tasting, which is measured in weeks, months and even years. The book describes the recipe as "a baby version of this usually large cheese," and I halved the quantities to fit my cheese press, so I obtained an even smaller cheese1. I suspected this would have an impact on the size of the eyes, but still I proceeded.

Leerdammer is one of the best-known brand names for Maasdam. Apart from the addition of a small quantity of Propionic shermanii (this is how the bacterium is referred to on cheese making sites), there was nothing particularly special in the process I followed to make the cheese. The ripening process, however, was different from any I had followed so far, consisting of an initial phase at cold temperature (40 F), followed by another phase at cool room temperature (65 F).

After I let the cheese age at 65 F for 6 weeks, with tentative hands I cut it, and in the photo you can see a sample of what I found. The loaf in the background will hopefully be the subject of a future post: it is in the photo, because I used some of my cheese to make it. 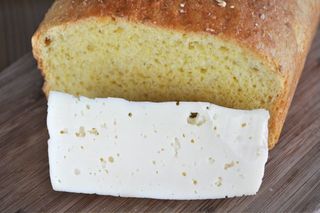 This being my first try, I don't know whether my small eyes are too small, based on the ingredients I used. As I write this, I have my second attempt in the very early stages of ripening, which means I will know in a couple of months how the new cheese compares with the previous one: making cheese really teaches you to be patient. (Update: this post includes a photo of a later version of my homemade Leerdammer)

Am I forgetting something? Indeed, I am. "Leerdammer has a sweet nutty flavor," says the introduction to the recipe, and that is exactly what our taste buds (papille gustative) found all around the little eyes. We have been eating morsels of this cheese with homemade bread (pane fatto in casa) and savoring every bite of it. There is only a small piece left, which saddens me a bit. However, I have a few other cheeses almost ready to be tasted, which always fills me with pleasant anticipation. Stay tuned for the next post on my cheese-making adventures.

1 I refer you to the book for the recipe details (some apply to cheese making in general, some to the specific cheese).

Posted by Simona Carini on March 02, 2010 in Cheese making | Permalink

Wow! That looks fantastic. I am taking an introductory class on 4/17 and hopefully I will learn enough to be hooked. I bet they have tons of cheese making supplies there, and I will try to buy the tartaric acid for the mascarpone if nothing else.

How rewarding it must be to make cheese. Taking patience, time and care and then the unveiling! I love reading your blog. It inspires me.

I agree with Marcellina's comment above: I love reading your blog. YOU are very inspiring. ;-)

I am so jealous of your ability to make cheese! As much as I enjoy cheese, i don't know that I ever could have the patience to even attempt to start. I am going to seriously think about trying it,though. Maybe I will do a cheese making party~I think you did an excellent jobwith the Leerdammer........hope you and hubby are well!

Thanks for the kind words, Marcellina. I also make fresh cheese, which takes less time.

Grazie, Paz, for the kind words.

Ciao Jann. My suggestion is to start with fresh cheese, which requires less waiting and no press. I recently made chenna, another good starter cheese. We are doing well, thanks!

You are amazing Simona making all these different cheeses by yourself.

Thanks, Ivy. I am learning as I go along. I hope one day to take a serious class, but the ones I am interested in are held far away.