The January 2010 Daring Bakers’ challenge was hosted by Lauren of Celiac Teen. Lauren chose Gluten-Free Graham Wafers and Nanaimo Bars as the challenge for the month. The sources she based her recipe on are 101 Cookbooks and www.nanaimo.ca.

This challenge was interesting for me for two main reasons. One is that graham wafers (a.k.a. graham crackers) were on my list of to-try recipes. The second is that I had never tried to bake anything gluten-free. The recipes for the Gluten-Free Graham Wafers and Nanaimo Bars are here.

In our household, we cannot eat the Nanaimo Bars as described in the recipe. I interpreted the spirit of the bars to be the idea of layers, one of which includes graham wafers. It was then a short step to think of gelato al biscotto (also called gelato col biscotto), which I loved as a child: gelato enclosed between two wafers (the ice cream flavor being, if I remember correctly, fiordilatte in the original product, called Camillino, which you can see at the end of the comic strip on this page). (Note that what we call biscotti in Italy is not the same thing as what are called biscotti in the US: see this post for details.)

Gelato al biscotto was an example of what we call gelato confezionato, as opposed to gelato di gelateria, the first produced industrially, the second artigianale (artisanal). Much as I liked the artisanal gelato, there was something special about gelato al biscotto: the contrast in flavor and texture between the gelato and the biscotto and also the challenge to eat it so that you didn't drip any ice cream. Another gelato confezionato I liked as a child was the coppa del nonno (grandfather's cup). It is gelato al caffè (coffee ice cream) and I was allowed to have it only rarely, which made it more desirable. Based on this set of memories, I decided to make gelato al biscotto with gelato al caffè. As an aside, I think that ice cream goes well with the theme of the upcoming Winter Olympics.

Instead of sorghum flour, I used teff flour (which is described as being gluten free). I had been meaning to buy some for a while, since injera is on my to-try list. The kind I purchased is of a lovely dark color. 02/02 Update: I realized that I forgot to specify that I used white rice flour, because I could not find sweet rice flour. If later on I find sweet rice flour, I will certainly try it and compare the results. 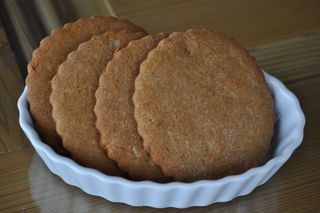 As a first step into the gluten-free world this was really a perfect recipe. One amazing thing about it is the delicious smell that pervades the kitchen when the wafers are baking. For health reasons, I used half a cup of brown sugar and 1/4 cup of honey. Also, I had only one tablespoon of vanilla extract left, and used it all. With an eye towards my final goal, I cut some of the wafers with my fluted round cookie cutter. I cut the others in rectangles, using my pastry cutter with fluted wheel. At baking time, I hit a bump on the road. The wafers on the top baking sheet burned before the ones on the bottom sheet were cooked, so I had to discard them. I tasted the wafers that baked properly and liked them a lot. 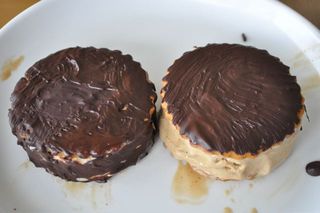 As third layer for the gelato al biscotto, I used chocolate. I melted some extra-dark chocolate (72%) in a small saucepan over very low heat and then distributed it using a pastry brush. Of the different layering schemes I tried, the best one was to layer some chocolate on the bottom side of the graham wafer, the side that ends up touching the ice cream (see photo below). While the chocolate was setting, I took out of the freezer the container with my homemade gelato al caffè. When the gelato al caffè had softened a bit, I made a layer of it on one chocolate-covered graham wafer and then topped it with another (chocolate side down). I smoothed out the ice cream all around with a knife, then returned the gelato al biscotto to the freezer briefly to firm up the ensemble. Unfortunately, none of the photos I took of the final product was good enough to appear on the blog: I only have one image of the gelato al biscotto being assembled. 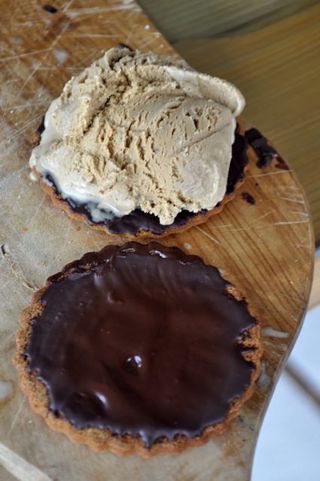 My idea worked very well, though the aesthetics (always my weak point) could use some improvement. The combination was a success. Next time, I will try with my homemade gelato alla vaniglia.

The graham wafers were excellent, so I made a second batch. I didn't have enough tapioca flour, so I supplemented it with potato flour (fecola di patate). The dough felt a bit wetter than the time before, but I will need to make another batch with tapioca flour to verify my impression. Again, a lovely smell filled the kitchen while the wafers were baking. This time, I baked one sheet at a time and watched the progress very carefully. I set the timer to 12 minutes, then rotated the baking sheet, then set the timer to 4 minutes, then checked every two minutes. This time, all the wafers baked properly.

A special thank you goes to our host for her choice and her efforts. It was an interesting challenge and a valuable learning experience. It was also a nice little walk down memory lane. I hope you will take the time to go around and look at the gorgeous creations of my talented fellow Daring Bakers.

I think your gelato al biscotto are beautiful indeed! This was a hard challenge and I salute you for sticking with the gluten-free baking ingredients. They can be a lot harder to handle and manipulate into pans and molds than their gluteny counterparts.

Wonderful job on my challenge! I'm so glad you stuck to gluten-free, and the final version is so creative =D.

Yes, wonderful job! Your cookies look terrific and I'm sure they tasted terrific, too.

I look forward to reading about your injera endeavors. I love injera but have never made it before.

Believe me ... I'd happily eat them! Glad you finally tryed the graham cookies!

This is a beautiful post Simona. Even though I can only vouch for the deliciousness of the graham crackers, I'm well versed in the tastes of your ice creams and know that the whole thing would be superb!

The flavours sound wonderful - what a very creative take on the project! I am really looking forward to the gelato recipe - coffee is one of my favourite icecream flavours.

Hi Rachel and thanks. I had to exercise a bit of patience when I rolled the dough, but the result was totally worth the extra effort. I will definitely make them again.

Thanks, Lauren for a really nice challenge.

Ciao Paz. Injera is definitely in the pipeline. And the cookies were a success.

Ciao Ivone. My second batch is almost gone, so I will soon bake more.

Ciao Christine: we can certainly put gelato al biscotto on the menu for our next dinner.

Ciao Foodycat. The wafers have a very nice flavor and I suspect they will become a permanent presence in our house. Stay tuned for the coffee ice cream post.

Graham crackers are on my list to do as well. Great idea to make a gelato as the second layer. We used to make icecream sandwiches years ago.

Ciao Ivy. I hope you try to make them one day: they are really good. And maybe you'll make ice cream sandwiches again with them.

It is so hard to find delicious gluten-free foods like these! Thanks for the recipe!

DELICIOUS!
Gluten-free food at its finest.