Making panir (or paneer) had been on my wish list for a while. However, a conversation with someone who had made chenna to prepare a dessert, made me curious, and therefore panir-making was delayed in favor chenna-making. As a matter of fact, the two cheeses are very similar, but chenna had two characteristics that made me prefer it: first, I had never tasted it and wanted to; and second, its preparation includes kneading and I wanted to try that too.

Here's a description of chenna (from this source):

A fresh, unripened cheese used throughout India, although it's most popular in the eastern part of the country. It is made from cow's or buffalo's milk and resembles a cottage cheese that's been kneaded until it's closer to the consistency of a light cream cheese. Chenna, which is available in Indian markets, is used primarily in a variety of Bengali desserts. 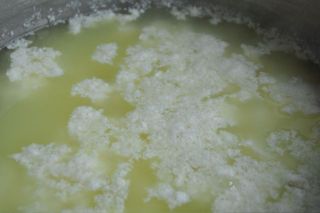 Chenna, like panir, is a good introductory cheese, since no special ingredient or equipment is required to make it. The coagulating agent can be fresh lemon juice (succo di limone) or citric acid. I used the latter, because I have it among my cheese-making supplies. The photo shows the curds being formed after the addition of the solution of citric acid to the boiling milk.

The source of the recipe I followed is the book Home Cheese Making by Ricki Carroll. I halved the quantities to use half a gallon of milk. Up to a point, the procedure to make panir and chenna is the same. Then, chenna is kneaded and that is really fun, because the "dough" has a soft, velvety consistency and it is a pleasure to handle it.

Since I was not planning to use chenna to make a dessert, I added a bit of fine sea salt to it and also the leaves from a few sprigs of fresh timo (thyme) from my little herb garden, then kneaded for a short period to distribute. Finally, I followed the instructions at the end of the same recipe and shaped the cheese into flat patties (polpettine) and shallow-fried them in an pan with olive oil.

According to the recipe, at the beginning of the kneading period, after 45 minutes of pressing under a 5-lb weight (I used a 2-lb weight, which worked fine, since I had a smaller cheese) the cheese is still warm, but mine was not. In looking around the web, I found the recipe followed by the person who had inspired me: it is in the fascinating book Lord Krishna's Cuisine: The Art of Indian Vegetarian Cooking by Yamuna Devi. By searching inside the book, I was able to take a look at the recipe for chenna (on page 315), where I read that the duration of the pressing step varies between 20 and 45 minutes, depending on the amount of milk used. Based on that, yesterday, when I made chenna again, I pressed it for about 25 minutes, after which the cheese was indeed still warm. I then proceeded with the kneading, and could feel that the cheese was softer than before. The photo shows the finished chenna al timo. 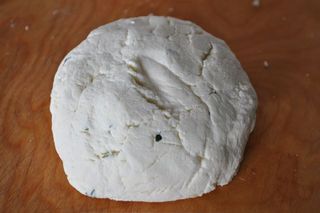 From start to finish, the process of making chenna took about one hour. As with other recipes for dairy products, I refer you to the referenced sources for the details.

Unfortunately, I don't have a good photo of the patties, but I have the chenna portrayed above in a covered container in the fridge and will make them again soon. Hopefully, I can get a nice photo to show. In the meantime, believe me when I say that they are really good.

This is my contribution to edition #218 of Weekend Herb Blogging, an event started by Kalyn of Kalyn's Kitchen, now administered by Haalo of Cook (Almost) Anything At Least Once and hosted this week by Rachel, The Crispy Cook.

Preview: I am honored to be the host for next week's edition of Weekend Herb Blogging. Your contributions will be most welcome.

Here is the roundup of the event.

I'm so glad you send this cool recipe in to WHB. We made chenna once on the Crispy Cook and then mixed it with orange rind, chopped almonds and sugar to make little dessert balls that were very good. You've reminded me to make it again soon. The recipe's on the Crispy Cook if you search the blog for chenna if you want to check it out.

Lovely and delicate, Simona. As much as Indian food is among my many favorite cuisines, I have yet to make paneer or chenna, yet they are relatively easy cheeses to master. I'm especially intrigued by your description of "soft, velvety" handling.

(I'm in for WHB. I think you know which recipe I'll be featuring. ; ) I look forward to your hosting.)

I'm NOT surprised that they were really good. ;-)

Hi Rachel. Thanks for the pointer: I looked at your recipe and it sounds excellent.

Hi Susan. It is a very interesting experience manipulating the cheese. I hope you will try one day. I must admit that the thought crossed my mind: I am looking forward to reading it.