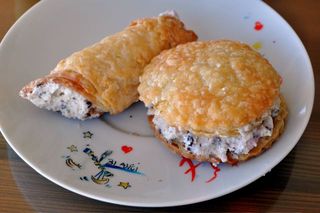 The November 2009 Daring Bakers Challenge was chosen and hosted by Lisa Michele of Parsley, Sage, Desserts and Line Drives. She chose the Italian Pastry, cannolo (cannoli is plural), using the cookbooks Lidia’s Italian-American Kitchen by Lidia Matticchio Bastianich and The Sopranos Family Cookbook by Allen Rucker; recipes by Michelle Scicolone, as ingredient/direction guides. She added her own modifications/changes, so the recipe is not 100% verbatim from either book.

In a previous post, I have briefly told the story of how I chanced to eat my first cannolo siciliano. Were it not for Daring Bakers, I don't think I would have tried to make this kind of cannoli at home. I know what a cannolo tastes like and knew from the beginning that I would not be able to come close to my memories, the best one being of eating countless miniature cannoli, where the ricotta filling was delicate, without candied fruit, the flavor of ricotta heavenly1. That was a long time ago, during my first visit to Sicily.

What I was not prepared for was disaster, in the form of my thermometer sliding into the 375 F-oil, which required the disposal of all of the oil as contaminated material. I am a notorious destroyer of thermometers. The one that ended up in the oil was a candy thermometer that I had broken open at the top. It still worked, except that when it slid into the pan, the hot oil penetrated inside and melted the measuring core. I decided not to give up: I went to the grocery store and got a new bottle of oil and a new thermometer.

In the meantime, the dough and I were not getting along. It was easy to roll and cut, but each piece sprang back to pre-rolled dimensions as soon as I let go of it. That was a problem, because I needed to shape the cannoli. I managed to get a couple of cannoli that reached the frying stage in decent shape. Frying (friggere) was not plain sailing either: before one minute was over, my first cannolo was burnt (leftmost in the photo). By reaction, the second cannolo ended up on the other side of the spectrum, called undercooked, and it puffed up beyond belief, because the dough was too thick, due to problem #1, about the dough, explained about (center in the photo).

I decided I would give it one more try. I shaped and fried an acceptable (give my lowered expectations) cannolo, filled it with my ricotta cream (more on this shortly), took a photo and served it to my husband. "The filling is good." What a sweet quality assurance professional he is! Of course, the filling was good: the homemade ricotta was freshly made (with milk as main ingredient, according to a recipe in the book The Home Creamery by Kathy Farrell-Kingsley, as mentioned in this post) and the candied orange peel was also of my own making, plus I used very good dark chocolate.

It was clear that the dough and I were not meant for each other. It was a sad farewell, because I didn't know what had not worked between us. Still disappointed by the unhappy ending of my adventure, I thought: "maybe this is a good time to try and make the other cannoli." Also called cannoncini (literally, small cannons), they are composed of a puff pastry shell filled with pastry or whipped cream, or variations thereof. I had my own puff pastry in the freezer, so it was easy to act upon my idea. I thawed a piece of the batch and implemented plan B. I cut a 12-inch long and 1-inch wide strip and rolled it around an oiled cannolo form, baked it at 375 F until golden, let cool, slid off the form and filled it with ricotta. I called it fusion dessert: cannolo siciliano filling in a cannolo shell. My husband smiled. He was not ecstatic, but happier than during the previous tasting.

I then made a couple of shells more in the cannolo siciliano shape, cutting a rectangle and uniting two opposing corners to close the loop. Finally, I made a few circles and prepared a sort of millefoglie. I split the baked circles in half to obtain six thinner circles and made two millefoglie out of three layers each, with some ricotta cream spread in between each layer. I know, it was a digression, but at least I can say that overall the exploration was not a total disaster.

You will find the recipe for the dough here. The recipe for puff pastry used in a previous edition of Daring Bakers is here. The recipe I used to make ricotta is described at the end of this post: it uses cultured buttermilk to acidify the milk and I used low-fat milk in it. This is not traditional ricotta, but I did not have time to make cheese before making cannoli to have the whey to make traditional ricotta. I drained the ricotta for two hours, then placed it in a bowl lined with some cloth to obtain a drier than usual consistency. The candied orange peel I made is not ready for prime time, so I defer discussion to a future post.

For the ricotta filling, I loosely followed the recipe here. I had 9.5 oz. of ricotta and sweetened it with 1 oz. of vanilla powdered sugar (zucchero vanigliato) and a tablespoon of agave nectar. I then added a scant tablespoon of candied orange peel, diced, and a tablespoon of finely chopped dark chocolate. I also added a dash of orange blossom water. I mixed all the ingredients well with a fork to achieve a creamy texture.

A special thank you goes to our host for her choice and her efforts. Regardless of the bumps on the road, it was a valuable learning experience. I hope you will take the time to go around and look at the gorgeous creations of my talented fellow Daring Bakers.

1 As Baol reminded me in his comment below, the ricotta traditionally used to fill cannoli is ricotta di pecora, i.e., ricotta made with, as main ingredient, the whey derived from the production of sheep milk's cheese.

Your cannoli look perfect Simona and scrumptious with your own homemade ricotta.

I think the puff pastry version looks lovely! And with your own ricotta and puff-pastry, it sounds delicious.

great post! I love how the "shell" of the cannolo is called the "buccia" or "skin" in Italian, at least that's what a Sicilian chef told me earlier this year.

Whatever you did with this challenge, all that I know is that your version of cannoli looks just lovely.

I love your cannoli, especially the round shaped one.

I commend you on your determination! If I'd lost the thermometre teh way you did I would have given up! Sorry you had trouble with the dough, but I still think the cannoli look good. And I love the puff pastry cannoli ... those are next on my list to try.

Thanks, Foodycat. Fortunately, I seem to be good at making puff pastry and the pairing with the ricotta cream worked nicely.

Ciao Jeremy. My Sicilian cookbook calls them scorze, which is a synonym of bucce. Maybe the recipe in my book will suit me better. I'll see if I want to have a second episode of this adventure.

Thanks, Paz. I am sending you one - virtually.

Grazie, Ivonne. I was very tempted to give up, but an element of stubbornness sent me to the store to get what I needed to try again. I will definitely make the puff pastry ones again.

Too bad it didn't work out. My dough was really weird but I never got to roll it as I run out of time and had to leave town for out little vacation. I froze it and will try it when I get back. The puff pastry version worked really well.

I admire your perseverance Simona!
Hope you had a wonderful Thanksgiving.
LL

What a saga! I admire the fact that you started all over after the oil fiasco; don't know if I would have had the gumption to. I love the way your puff pastry pseudo-cannoli look. And I'm sure that anything with your homemade ricotta inside it would be delicious.

Great try! You did well and I admire your perseverance! When we make them at home (have been doing this since I was a very little girl) we use a pasta machine to roll the dough out. That way we can roll the dough out very thinly. Hope that helps and don't give up!

Ciao Laura. Glad you took a little vacation: will we learn where? I am curious to know how your dough behaves.

Thanks, Lori Lynn. It was a peaceful day. Hope your Thanksgiving was nice too.

Ciao Lisa. I had only myself to blame for the thermometer accident. It was a bit scary. I am glad there was no spill. I may try again.

Ciao Debbie. Unfortunately I don't own a pasta machine, though I can see how it is helpful in getting the dough to be very thin. I am sure your cannoli look great. I am more and more leaning towards giving them another try.

I'm so sorry the dough didn't work out for you..it is quite a challenge to deal with and fry..took me two weeks to get it right! However, what a great idea to use puff pastry, and those cannoli, traditional and stacked, look gorgeous! Thank you for taking part in my challenge this month!!

Ciao Lisa. It was a learning experience and I am glad I tried. I am planning to try again. I am grateful to your for the challenge.

OMG~this would be a challenge for anyone and you managed to fly over those bumps in the road!

Ciao Jann. Cannoli are certainly not easy to make: so many details go into them. But the important thing is to try. Now I have a baseline that I can work towards improving.