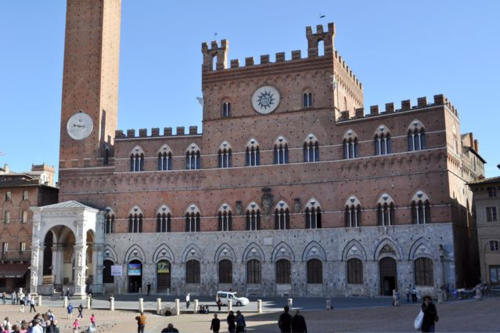 During our recent trip to Italy, we spent half a day in Siena: we had lunch with a friend and then walked around the beautiful downtown area. At the core of the city there is Piazza del Campo (the sign on the wall actually bears the inscription: Il Campo, literally, the field), famous for its shell shape and for Il Palio, which twice a year turns the piazza into a stage for a gorgeous pageant and a heated horse race. Palio is the banner that is the prize of the race, in which 10 of the 17 contrade (neighborhoods) compete. 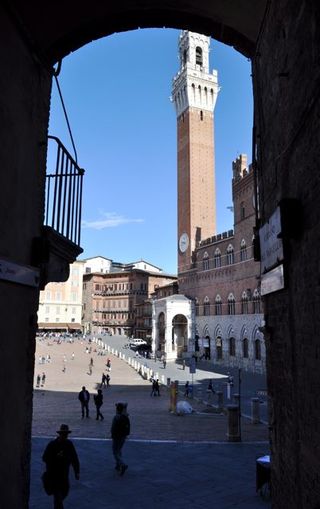 On the lowest side of the square there are the Palazzo Comunale and the Torre del Mangia (tower). One characteristic of the square that I like is the fact that you approach it through relatively narrow streets or narrow and dark vaulted passages, so that arriving in the vast space leaves you speechless, especially when sunlight floods the square, as it did the day we visited. 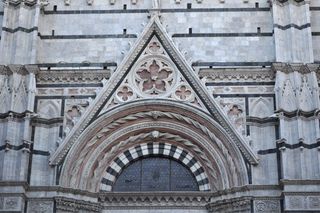 Siena has also a gorgeous duomo (cathedral, of which the photo shows a small detail of the facade) and many other interesting buildings. Having already visited them in the past, we spent most of our time walking along the main thoroughfares that run parallel to Il Campo and sort of embrace it: Banchi di Sotto and Via di Città.

Such a walk offers innumerable chances to admire elegant shop windows (vetrine) and to encounter up close and personal the traditional sweets for which Siena is justly famous, first among them the panforte (literally, strong bread). 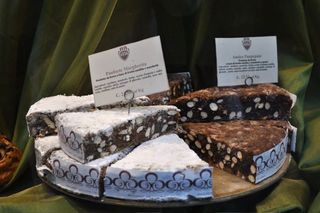 One version is called panforte nero or panpepato (on the right in the photo) and another is the panforte margherita (lighter in color and more delicate in flavor, on the left in the photo). As mentioned in an earlier post, I like my portion of panforte to come from a large wheel. 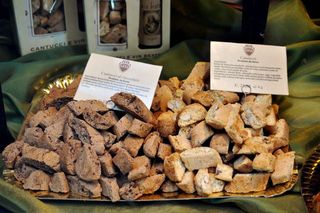 Then, there are ricciarelli, sweet almond-shaped cookies made with almond paste, once called marzapanetti (literally, small marzipan). 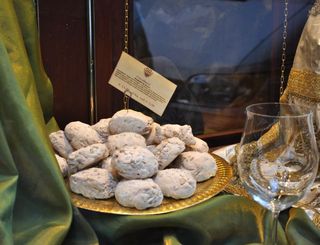 Next, we encountered cavallucci (photo below, on the left), which are walnut cookies, and finally we saw cantuccini (small cantucci, shown in the photo on the right in the plain and chocolate version).

This time, I left all those goodies where I saw them, and opted for purchasing a pan co' santi, a round loaf of bread enriched with raisins and walnuts, which is traditionally baked around the religious holiday of Ognissanti (All Saints' Day). It became my contribution to dinner at a friends' house and was much appreciated. I am planning to look around for a recipe of this holiday bread: if I succeed, you will hear more about it.

Posted by Simona Carini on October 20, 2009 in Travel | Permalink

I love Siena, and spent many times there to visit my aunt and cousin. My first boyfriend is from there ;o)

I make panforte for Christmas, so delicious!

Thanks for the memories....

Ciao Laura. Are you going to write about your panforte? I hope so.

Wonderful sights. Thanks for sharing your photos with us. I feel like I had a mini-vacation in the office. Back to work for me.

Thanks for the lovely pictures and introduction to some lovely desserts I would love to try. I am planning a visit to Rome soon and Sienna is not far away from Rome. Maybe I can plan a visit there as well.

What a beautiful trip you had, Simona! You only make my longing to visit Italy more intense. :) You know, ricciarelli have been on my to-bake cookie list for the longest time. This is just the inspiration I needed to make some. Do you have a recipe that you love?

Thanks for the tour about town.
Good luck with your bread recipe.
LL

They are indeed very good, Jeremy. It was a fun trip.

Thanks Paz for the kind words: I am glad you enjoyed my photos. I have a few more to share in the near future.

You are welcome, Ivy. I would certainly recommend a visit to Siena, if your schedule permits it.

Ciao Susan. I have actually never made ricciarelli, so I don't have a favorite recipe. Have you looked at this? http://italianfood.about.com/od/biscottietc/r/blr0518.htm I actually thought that only egg whites were used in ricciarelli, but also the recipe on the Accademia Italiana della Cucina uses some syrup. Let me know if you try it.

You are welcome, Lori Lynn. I have actually found an interesting recipe to start with.