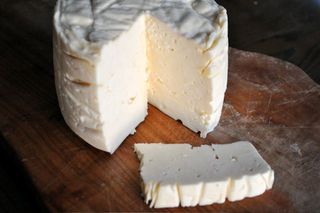 In a recent post I narrated my adventures in making Farmer's Cheese (literally, formaggio del contadino). My second attempt resulted in a tasty and rather salty cheese that sparked my imagination in the direction of salty and sweet pairings:

"Having a salty cheese (formaggio salato) made me try different pairings, the most interesting ones being with sweet companions. First of all figs... [details to be given in an upcoming post.]" 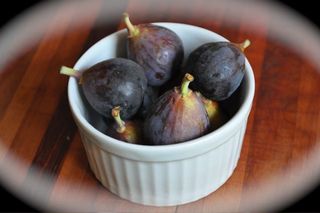 The "upcoming post" is the current one. Before I go any further, let me remind you that the singular of fichi is fico (the importance of the final O will become clear when you reach the end of the post). For this dish I used Mission figs, sweet mouthfuls that one can eat without removing the skin. I read that this variety of fig was brought to California "in the eighteenth century by Franciscan friars from Mexico where they had been given it by Spanish missionaries." Most figs I ate as a child in Italy required peeling, though I remember a variety of small, yellow, incredibly sweet ones that I ate whole. I often picked them myself. 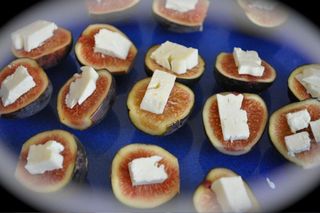 I decided to try and warm up both figs and cheese in the oven and see what happened: my husband and I liked the result and so I have made this dish several times in recent days. Preheat the oven to 375 F. Wash carefully, and pat dry however many figs you think you will eat (warning: more than you think). Remove the stem from each fig and cut in half lengthwise. Arrange fig halves in a baking dish, then place over each a small piece of Farmer's Cheese. Put in the oven about 10 minutes before the estimated serving time. After 10 minutes, the figs will be nice and warm, their flesh a bit softened. The cheese will be warm: it does not melt, so the pieces retain their shape and efficiently deliver to the palate their saltiness, which contrasts nicely with the fig's sweetness.

The photo above shows the plate before it went into the oven the last time I prepared the dish. By the time we ate the figs, it was rather dark and I decided not to try and take a photo with the flash.

Fichi col formaggiO del contadino fatto in casa is my small contribution to the 2nd Annual O Foods Contest for Ovarian Cancer Awareness Month organized by Michelle ofBleeding Espressoand Sara of Ms Adventures in Italy. Many thanks to Michelle and Sara for doing this.

The two halves of the roundup are here and here.

September is Ovarian Cancer Awareness Month, and for the second year in a row, Sara of Ms Adventures in Italy and Michelle of Bleeding Espresso are hosting the O Foods Contest to raise awareness of this important health issue.

There are TWO WAYS to take part in the O Foods Contest:

TWO: If you’re not into the recipe thing, simply post this entire text box in a post on your blog to help spread the word and send your post url to ofoods[at]gmail[dot]com by 11:59 pm (Italy time) on Monday, September 28, 2009.

From the Ovarian Cancer Research Fund:

And remember, you can also always donate to the Ovarian Cancer Research Fund at our page through FirstGiving!

Please help spread the word about ovarian cancer.
Together we can make enough noise to kill this silent killer.

So scrumptious, I am getting hungry! :-)

I recently had the good luck of finding ripe figs at the market.
I cut them in half and put them under the grill (broiler) until the top was sizzling and beginning to caramelize. I served them immediately with blue cheese, which I put on top of the figs the moment I took them out of the oven. The cheese was just beginning to melt when we started eating. It was delicious.

Where in Italy are you going?
I miss the days there. Wished I could return right away.
I am in love with the Veneto region along the Venetian Lagoon.

I love figs! this is great.

You come up with the most delicious combinations! Hope you and hubby are fine and had a great summer.......going back to ITsoon? I am missing being there this fall....take care!

Figs and blue cheese: very nice! I wish I had a fig tree in my yard. We are going to Milan first and then to Perugia, my home town. I totally understand your love for the Laguna.

Thanks, Jann. I am actually packing right now for our upcoming trip. I hope you get to visit Italy soon.

Love the cheese and figs! Sorry I missed this event. Duly noted for next year.