For this month's Daring Cooks challenge, Debyi of The Healthy Vegan Kitchen! has chosen Indian Dosas (Vegan Style) from the cookbook reFresh: Contemporary Vegan Recipes From the Award Winning Fresh Restaurants by Ruth Tal. You can find the recipe for Indian Dosas, Curried Garbanzo Filling and Coconut Curry Sauce here.

Although I told myself I would not prepare the recipe a day or two before the post was due, that is once again what happened. It all went well, except the photo-taking part. As a result, I don't have an image of the assembled dosas to share. I will rely on your imagination to make up for that. 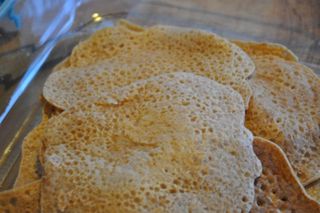 I followed the given recipe to make the batter (pastella) for dosas, using soy milk (latte di soia). I rarely make pancakes, but my lack of experience was not a problem: the batter was easy to work with and only one dosa was badly injured when I flipped it. 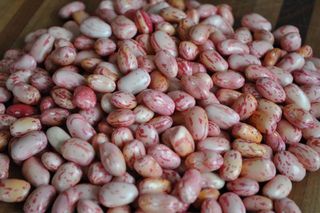 Debyi allowed us free rein in terms of filling and sauce, the only requirement being to keep them both vegan. I decided to improvise using available ingredients. I started with half a pound of fagioli borlotti freschi (fresh cranberry beans, weighed after being shelled — more on these in an upcoming post). I cooked the beans in enough water to cover them by an inch, together with three slices of an onion, a bay leaf, a smashed garlic clove and a couple of parsley sprigs. Once the beans were ready, I turned off the heat and let them cool, then removed the aromatics and drained them. Finally, I seasoned them with some sea salt. 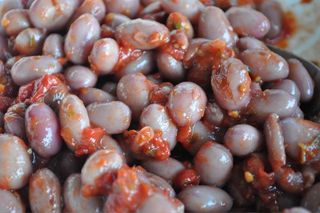 In the meantime, I started to slow-roast a pound of San Marzano-like tomatoes (pomodori). The inspiration here came from this recipe by Kalyn of Kalyn's Kitchen. I cut the tomatoes by half and seasoned them with a mix of finely chopped fresh herbs (winter savory, marjoram and parsley) and a bit of salt. I then placed them, cut side down, on a baking sheet lined with a silicone baking mat and baked them at 250 F for five hours without turning them. When they were cool, I slipped off the skin and spooned them in a bowl, where I mashed them with a fork. Finally, I added the beans, mixed well and seasoned with salt and freshly ground black pepper to taste.

For the topping, I set my eyes on some yellow heirloom tomatoes I had, compliments of my CSA box, and decided to make a simple sauce. Last year, I learned to use my grater to quickly turn fresh tomatoes into crushed tomatoes using this tecnique, and that is what I did. In a small saucepan, I warmed up a bit of olive oil, then added two garlic cloves, minced, and a few leaves of pineapple sage (salvia ananas), slivered. When they became fragrant, I added the crushed tomatoes and cooked, uncovered, for 10 minutes, then adjusted the salt.

While I prepared the dosas, I warmed up the bean filling and tomato topping and then served them all together. The dish was well received by the people around the table. Looking back, I feel that, once again, in preparing a dish from another culinary tradition, I gave it a decidedly Italian twist.

I am sure you will find a lot of photographs to admire, when you browse the creations of my fellow Daring Cooks. A special thanks to Debyi for a very nice challenge.

I want to try these as well, maybe next time we have guests over.

Sorry for being so late to visit but I am having problems with my internet connection and most of the time do not have any internet.
That's very interesting and a very difficult challenge. Sounds both different and delicious. I'd love to try these.

Ciao Laura. I hope you try them: they are really nice.

Hi Ivy. I have been reading about your connection problems: how frustrating. I hope you get a reliable connection soon. It requires a bit of organization, as the dish is made up of three components, but it was certainly worth the effort.

I just this season was able to get hold of fresh shelling beans (similar to cranberry beans, called Tongues of Flame), and I loved cooking with them. I wish I could get more. Your dosas and filling sound delicious, real comfort food. Dosas are another thing I love!

Glad to read you got some shelling beans and liked them, Lisa. I am not sure why they are so hard to find. I will treasure the ones I have frozen. Dosas were a pleasant surprise and will soon be again on the menu.