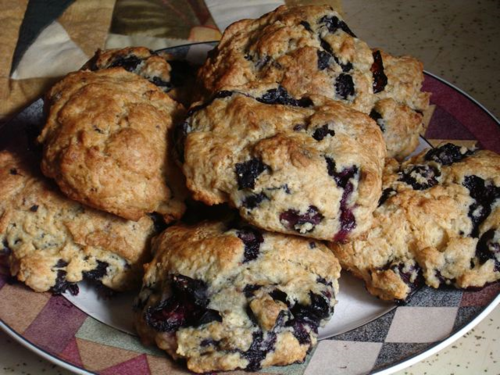 I first tasted a scone the second time I was in England to study. It was accompanied with jam and clotted cream. It was quite different from anything I had tasted before and it was love at first bite.

The table was covered with a checked red-and-white tablecloth that matched the counterpane, and upon it was set a blue dish full of apples, a yellow jug of milk, a purple plate upon which were piled buttered scones, two green plates and two mugs to match.

What I like about this description is that it is colorful: red, white, blue, yellow, purple and green. To the list, pretty soon another one is added: salmon-pink, the color of the geraniums (gerani) that crowd the room where Marmaduke Scarlet lives. Maria, the protagonist of the novel The Little White Horse by Elizabeth Goudge (1946), visits Marmaduke's quarters towards the end of the book. Up until that point, she has only seen him while presiding in the kitchen, in the company of Zachariah, the cat.

The novel is a bit too rich in colorful characters to attempt even a brief description here, and maybe you already know all about them from reading the novel when you were a child, or having it read to you. I can see how children would be fascinated by the story, the characters, the places, the events. Had I read the story as a little girl, would I have wished to be Maria? I obviously cannot answer this question. I can tell you, though, that my favorite character was Serena, the white hare (lepre) that Maria rescues from the Men from the Dark Woods.

Back to the scones baked by Marmaduke Scarlet for Maria, I baked mine for my husband. In looking for a recipe to replicate, I had as requirement that it used buttermilk (latticello), which narrowed the list of candidates. Out of those I found, I chose this one. The changes I made were: no topping, and fresh raspberries (lamponi) or blueberries (mirtilli) instead of dried cherries (ciliegie). Another feature of the recipe that recommended it to me is that it makes a small number of scones: they are so much better when freshly made and a small number is perfect for our small household.

I made the recipe three times. The first time, I used raspberries and shaped the dough (which was rather sticky, due to the broken-down fresh raspberries) into 8 rounds, while the second time (also with raspberries) I shaped the dough into a single round, then scored it into 8 slices, which I separated a few minutes before the end of baking time, then put back into the oven, to obtain crispy edges all around.The third time, I used blueberries and went back to the separate round shapes (see photo). I never measured the fruit. I estimate that I had about half a cup of raspberries and a cup of blueberries.

In the pages that follow the little scene that inspired me, Marmaduke outshines himself by preparing a banquet for 30 people, whose menu includes famous English dishes that I know (syllabub, plum cake) and a lot that I don't (Cornish pasty, Devonshire splits). In earlier chapters, he consistently provides delectable repasts for the inhabitants of Moonacre Manor.

One last note. In part 3 of Chapter 9 there is the Spring Song:

St. Francis of Assisi (San Francesco d'Assisi, 1181/2-1226) wrote a beautiful poem in praise of brother sun (fratello sole), sister moon (sorella luna), mother earth (madre terra), etc. In Italian, the poem is called Cantico delle creature, while in English it is called Canticle of the Sun. I investigated possible links between Ms. Goudge and St. Francis and found that she wrote a book about his life, published in 1959.

This is my contribution to the third edition of Cook the Books, hosted by Rachel The Crispy Cook. You can find the guidelines for participating in the event here, and here is the announcement of the current edition.

Scones are so good! Had quite a few of them in Ireland. Love the idea of cooking inspired the the same book others are reading. I'll have to see if I can join in next time. I like the idea of so much fruit in the scones, even though it seemed to make them a littel difficult to shape. I'll have one blueberry and one raspberry, please.

I love scones with jam and clotted cream! One of the best things about living in England is the easy access to clotted cream. When I read this book as a child I didn't want to be Maria but I DID want her clothes and her bedroom!

one of my favorite morning delights~oh, and with the clotted cream! I have not made these in ages, you have inspired me ! Trust you are having a wonderful summer!

I have yet to try scones and there are lots of Gluten Free recipes out there for them since they don't need the structure of gluten to rise up much, so you have inspired me to make some soon.

I have posted the Cook the Books roundup today if you would like to see the other entries and gave Novel Food a little plug as well.

I must admit Ive heard so much about scones and havent yet had the chance to try them..I guess you have just provided me with the opportunity!

A great choice for CTB--your scones look delicious. I loved that description of the colorful table setting too. Hope you can join us for the next book too.
Aloha,

I have not tried scones yet and they are certainly in my list to try.

The first British scone I ever tasted was on my honeymoon 14 years ago. I don't think I have ever had one quite as scrumptious again. Thanks for the enjoyable post, Simona. I just everything about scones.

Hi Elle. I hope you can join us for the next edition. It is indeed fun to share the experience of reading the same book. Using fresh fruit makes a difference in the dough, but the result is worth the extra effort in the shaping phase. As you can see, my scones are not a paragon of consistency in terms of shape: a 1/3 cup measure and a bit of finger work help make round scones.

Hi Foodycat. I can see myself wanting her bedroom, for sure, and the riding habit. One of these days I will try to make clotted cream at home.

Hi Jann. I'm delighted to read I have inspired you to make scones. They are truly delicious for breakfast or a snack. Where are your travels bringing you this summer?

Hi Rachel. I hope you find some nice GF recipe for scones. Thanks for the wonderful roundup and for mentioning Novel Food.

Ciao Mia. Definitely try some scones: they are delicious and the recipe lends itself to personal variations and adjustments.

Thanks Deb. I was struck by the assortment of colors in that paragraph. I am planning to participate in the next round. Getting the book is towards the top of my to-do list.

Hi Ivy. I am partial to them, so I certainly recommend try to make them. They are quick to make and so worth the effort.

Hi Susan. The first scone stands out in your memory as well as in mine. I guess part of its charm was that you were in your honeymoon. It was such a nice surprise for me: a nice balance of different elements in one small cake.