As long as I lived in Italy, the only peas I ate were shelled peas. As a child, shelling peas was a task assigned to me and one that I did not enjoy, because I did not like eating peas. I welcomed the appearance on the market of frozen peas: at least, I did not have to shell those. I remember the slogan of the advertisement for the first brand of frozen peas: colti sul fatto e surgelati all'istante. It is a play on words: the verb cogliere means to pick, but cogliere sul fatto means to catch red-handed. The slogan conveyed the idea that the peas were picked at their best and immediately frozen (surgelati all'istante) to keep them pristine — at least that is how I interpreted it.

In time, I learned to like peas, at least in some dishes. When I moved to the US, I tasted first snow peas and then snap peas. According to this page, the Italian translation of both snow peas and snap peas is piselli mangiatutto, which means peas of which one eats (mangia) everything (tutto), the pod (baccello) and the peas inside — after removing the top and the lateral string1. It took some time before I cooked some snap peas. Receiving some in my CSA box was an incentive to get more familiar with preparing them.

I wanted a simple recipe and I am partial to roasted vegetables. A search on the web returned the perfect recipe: roasted snap peas with shallots (piselli mangiatutto arrosto con scalogno), from EatingWell Magazine. I followed the recipe almost to the letter, minus the optional bacon. The dish is easy to make and you can get the peas ready while the oven warms up. I like simple side dishes that can be prepared quickly as an ideal complement to a more elaborate main course. 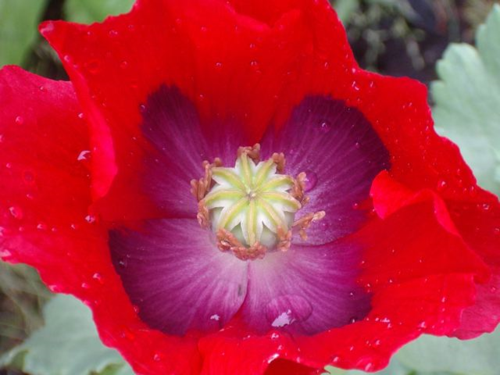 I have already made these roasted snap peas with shallots several times, but each time I have failed in the photograph-taking part. So, once again, I am showing you something rather unrelated, but visually more appealing: the glorious blooming of my first red poppy (papavero rosso). Some time ago, I saw some poppy seedlings at the farmers' market: the label said that they would be good for harvesting poppy seeds. I did not ask what color the poppies (papaveri) would be: I wanted a surprise. I love our bright orange California poppies, but I have a soft spot in my heart for the red poppies of my Italian childhood, so the surprise bloom brought a big smile on my face. Considering my poor gardening skills, I am already thrilled by the result of my little poppy adventure.

1 According to the page referenced above, snap peas can also be called taccole in Italian. The photos of taccole I have seen on the web, however, make me think of snow peas, rather than snap peas. The two varieties differ in the shape of their pods: flat (snow peas) versus round (snap peas, as you can see in the photo above).

This post is my contribution to the current edition of Fresh Produce of the Month, an event created by my friend Marta, An Italian in the US, that this month focuses on piselli.

Posted by Simona Carini on June 22, 2009 in Fresh Produce of the Month, Legume Dish, Side Dish, Vegetable Dish | Permalink

is there anywhere in Italy where you eat the whole pod? I've never seen that...

Growing up in the states Ive known these kind of peas,but havent seen them in a long time..Those lovely poppies are a delightful sight! Good for you,Bravo!

I have never thought of roasting peas. This sounds very interesting.

The poppy is gorgeous!
LL

Ciao Jeremy. Yours is a good question and I tried to answer it in my footnote. I have never eaten this kind of peas in Italy.

Ciao Mia. I hope you'll find some: they are so easy to cook and so good.

Hi Lori Lynn. I also found the recipe interesting. Let me know if you try it. Thanks, I love my red poppy: it is so cheerful.

I like a combination of sugar snaps, snow peas (which we call mangetout in England, on the same principle as mangiatutto) and regular peas as a warm salad with a bit of lemon juice and olive oil as the dressing.

Hi Foodycat. What a nice idea! An all-pea salad. Thank you so much for the suggestion.