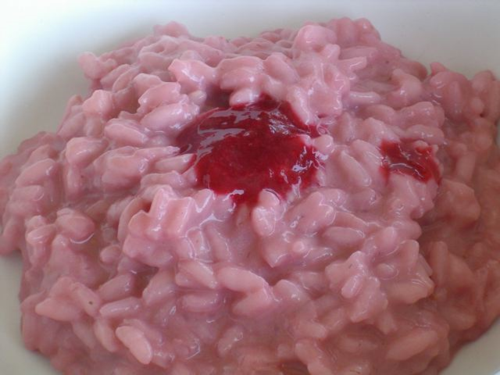 I love raspberries, so I was looking forward to the arrival of raspberry season. This week I had two baskets that I had to consume immediately, so I made risotto ai lamponi (raspberry risotto) and gelato alla vaniglia variegato al lampone (raspberry-marbled vanilla ice cream), both colorful dishes.

The risotto is quite pretty, besides being tasty. You will find my recipe in this post from last year. When I prepared the risotto last week, I had just made a batch of mascarpone and used two tablespoons of it to finish the risotto, instead of the fresh chèvre. This week, I used my  favorite, Cypress Grove's Purple Haze.

In the wake of the success of my recent gelato alla vaniglia variegato al rabarbaro (rhubarb-marbled vanilla ice cream), I decided to make the same vanilla ice cream (recipe in this post) and to marble it with raspberry purée. A couple of hours before churning the ice cream, marinate the raspberries with a teaspoon of agave nectar and half a teaspoon of balsamic vinegar (as described in this post), then shortly before needing it, purée the raspberries and press through a strainer. It is important to spend a bit of time pressing all the pulp off the seeds, so the purée is nice and thick. I refrigerated the purée until ready to add it to the ice cream. 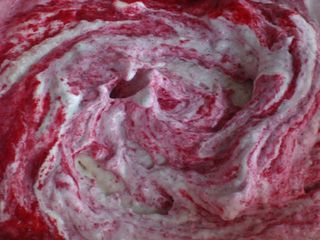 Once the gelato alla vaniglia was ready, I scooped it into a bowl and added the raspberry purée by spoonfuls, swirling it in with a spatula to create a marbling pattern 1. As usual, I served the result to the head of my quality assurance department (a.k.a., my husband) and then we discussed the findings. The flavor of raspberries was probably a bit too prominent for a variegato, so next time I will try using less raspberry purée. I also want to try to fold the same amount of raspberry purée I used this time into the custard before churning it. I will run these tests soon and then report on the results.

1 I used a lidded plastic bowl, which then went into the freezer with the leftover ice cream, after I covered the surface of the ice cream with a square of wax paper. If, after the marbling, the ice cream had been too soft, I would have covered it with wax paper, put the lid on the container and allow it to spend a short time in the freezer until firmer, but still soft.

Paz (who wants to be part of the quality assurance department)

Hi Paz. Both dished are quite nice and I love their color. I hope you'll visit us some day, so my husband can tell you all about his job.

Our local raspberries will be ready very soon - I cannot wait! Lovely post, Simona. Did you put the gelato back in the freezer to harden again after you swirled in the raspberry purée or was it just the right texture to serve then? (I am making notes.)

Hi Susan. Good question. The short answer is no. I made sure that the raspberry purée was cold (same as the custard before churning) by keeping it in the fridge until I was ready to use it. I will add a note to the post to clarify this. I then served the variegato immediately. The texture was to my liking. However, if the result ends up being too soft, a short sojourn in the freezer is the solution.

I've never had sweet risotto and this looks so tasty! I love the colour (and the fact there are no artificial colours) and creamy consistency. I wish I could have a huge spoon of this sweet treat :)

Hi Catalina. I made risotto with both raspberries and blackberries: both versions are pretty and tasty. Glad you like the look of this one.