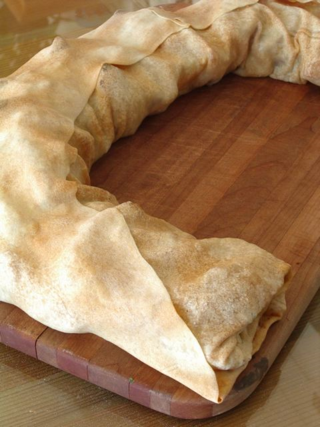 The May Daring Bakers’ challenge was hosted by Linda of make life sweeter! and Courtney of Coco Cooks. They chose Apple Strudel from the recipe book Kaffeehaus: Exquisite Desserts from the Classic Cafés of Vienna, Budapest and Prague by Rick Rodgers.

A few months ago, I wrote a post on a traditional dessert from my home region (Umbria, Italy) called rocciata, which I introduced thus: "A thin layer of dough envelopes pieces of apple (mela), nuts and raisins. It looks like a strudel, but it isn't." I think it is fitting that this month, to fulfill the Daring Bakers' challenge, I baked rocciata's kindred dessert. By the way, the similarity between rocciata and strudel is the subject of interesting speculations, but, as far as I know, there are no certainties. Strudel is a delicious dessert of Austrian origin and it is part of the tradition of the Italian regions that border Austria and were once part of the Austro-Hungarian empire.

The hosts' only requirement was to make the strudel dough. We were then free to fill it as we wished. I decided to stay close to the original recipe and made strudel di mele, with apples bought on purpose at the farmers' market, from a vendor who has a bin labeled "uglies." I honestly don't care about apple beauty contests, probably because as a child I was told that often the least esthetically appealing apples are the best ones in terms of flavor. And in any case, apples with a dent make perfect filling for strudel.

You will find the recipe provided by the hosts here. While I followed the instructions for the dough to the letter, as required, I approached the filling from my usual low-sugar and low-butter perspective. Hence, I added only 1 tablespoon of sugar to the apples. I also decided to use only half a cup of breadcrumbs, toasted in 1 tablespoon of melted butter. I make breadcrumbs using my homemade bread and with the help of my grattugia (grater). Finally, I melted only two more tablespoons of butter to coat the inside of the dough and the finished product. 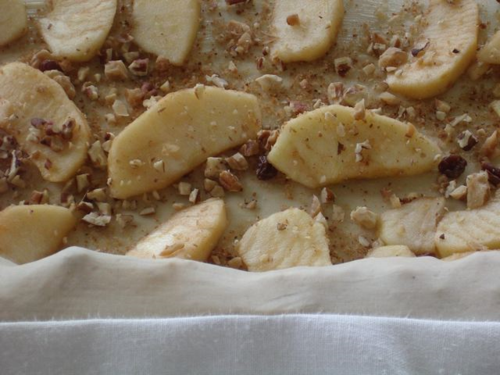 Making rocciata had already exposed me to the challenge of getting the dough to be really thin. I am proud to report that I did not tear it and I made a rectangular ellipse (a kind of geometric figure that I invented for this purpose) 32" wide and slightly over 2 feet long. I did all the rolling with my two matterelli (rolling pins) and did not try the hand and forearm method described in the recipe.

I did not cut away any dough around the edges, because my dough was uniformly thin. I also departed from the given instructions in the distribution of the filling and subsequent rolling of the strudel. I basically did what I do for rocciata, spreading the filling over the entire surface of the dough, minus a ring all around, and rolling from the longest side.

I spread butter on the dough first, using a pastry brush, then distributed the toasted breadcrumbs (these two steps are not in my recipe for rocciata), then the apple slices and raisins (uvetta), and finally the chopped walnuts (noci), leaving a a 2"-wide ring all around. I then folded the free dough along the two short sides, as I saw it done in this video mentioned by a fellow Daring Baker (the filling part starts at about 4:20), then rolled from the longest side, using the cloth as prop (photo above).

Once the strudel was formed and settled on the baking sheet, I brushed the surface with the remaining melted butter. I baked the strudel for 40 minutes. The result looked nice and received top rating from my husband.

A special thank you goes to our hosts for their efforts and support: I enjoyed the challenge. I hope you will take the time to go around and look at the gorgeous creations of my talented fellow Daring Bakers. 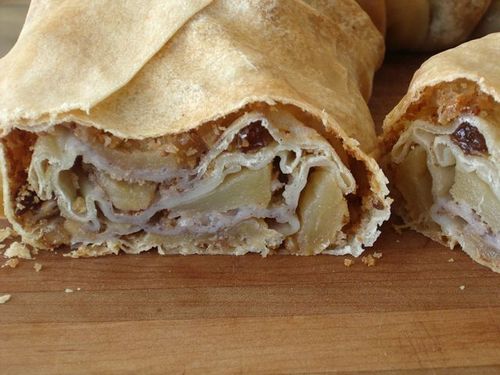 Posted by Simona Carini on May 27, 2009 in Daring Bakers, Dessert | Permalink

Very nice job! I like your idea for less sugar. With apples, you can get away with less. Looks delicious.

Great post. And yes sometimes the beautiful fruit doent have the flvaor as one that has been around a bit.i Have to research more of the Italian dessert you mentioned.

Lovely strudel. And I agree on the "uglies" I've heard the same thing.

Absolutely amazing!I remember your admirable patience and creativity from the "marzipan snake" you made..once again you astonish me with your meticulous investment,Bravo! it looks superbly delicious!

You did a beautiful job on the strudel. Your pastry is so wonderfully thin and flaky.

Glad you liked the challenge :) Your strudel looks wonderful!

Thanks, Shannon. Raisins also add sweetness to the filling.

Thanks, Courtney. I wonder if it is made at all outside of Italy.

Thanks, Jenny. Plus, those shiny, perfect apples remind me so much of Snow White!

Thanks, Mia. I approach certain tasks with a sort of meditative perspective, focusing on the simple beauty of the material I am handling. The result not always matches expectations, but I still enjoy the making. I must admit that this time I was proud of myself.

Thanks, Natalie. I was very happy with the result.

I loved teh challenge, Linda: thanks again for it.

Excellent strudel! I want to try your rocciata, too. Anything with apples! ;)

I agree, Simona - the best apples are not necessarily the prettiest. There are some fabulous heirloom varieties which we'll never see outside of local markets. Shame.
That's a lovely strudel, inside and out.

I am a big apples' fan, Chris, so I totally agree with you: anything with apples!

I love heirloom varieties, Susan, sometimes in odd shapes and always with interesting flavor. There are some growers in this area that carry on the tradition, so I consider myself lucky. Thanks!