I grew up eating gelato, but nobody I knew made it at home. In August of 1999, after coming back from an extended stay in Italy, I purchased my first ice cream maker and started experimenting — with the book Frozen Desserts by Caroline Liddell and Robin Weir as guide. The immediate reason for my new enterprise was my husband: he missed his daily dose of gelato, and I promised him I would do something to address his withdrawal symptoms. The first flavor of ice cream that I made was vaniglia (vanilla). Later on, I learned that vanilla is the most common flavor of ice cream in the US, and I found that it is most people's favorite.

If you are wondering about the difference between gelato and ice cream, Vanessa of Italy in SF recently published a very informative post on the subject. I don't know whether the fat and air quantity of what I make allow it to qualify as gelato. I know, though, that I serve it right out of the machine, without freezing it first, which is what recipes I have seen instruct you to do. I freeze what is leftover, but I make sure that the consistency is creamy before I serve it again.

Without further ado, here is how I currently prepare the basic version of the vanilla kind. The evening before, I warm up to below boiling point 1 and 1/4 cups of non-fat milk with 2 of tablespoons of agave nectar and 1/2 of a vanilla bean (baccello di vaniglia) split in half lengthwise to reveal the tiny black seeds inside. The beans I get in the bulk section of the stores where I shop are very flavorful and I have found that using half of a long bean is enough. As the milk warms up, some seeds start floating around. When I remove the saucepan with the milk from the heat, I cover it, let it cool and then refrigerate.

The morning after, I make the custard: I beat 1 extra-large egg and one yolk with a 1/4 cup of granulated sugar until the mixture is bubbly. In the meantime, I warm up the milk, then slowly add it to the beaten eggs. I pour the mixture back in the saucepan and put it on the stove over gentle heat, stirring. When a film forms over the back side of the stirring spoon (I use a wooden one), I draw my finger across. If the line stays clear, the custard is ready. (If it overheats, it will curdle.) The saucepan goes straight from the heat to a cold water bath, while I keep stirring the custard to bring down its temperature. When the custard is cool, I cover the pan and place it in the fridge until thoroughly cold. 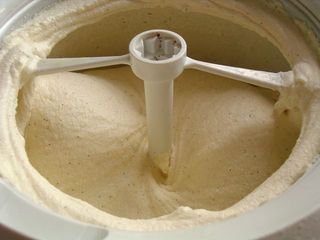 When I am ready to churn, I take the custard out of the fridge, add to it one cup of chilled heavy whipping cream and mix. With a spatula, I retrieve the two halves of the vanilla bean and scrape the seeds off their inner surface, then mix again and finally pour the custard into the ice cream maker. I let the machine run until its content reaches gelato consistency. Then I stop the machine, scrape the ice cream from the sides and bottom of the machine bowl, stir briefly, scoop into small bowls and serve immediately. Only the very end of this process had to undergo some changes for the recipe under discussion, since the rhubarb is added to the vanilla ice cream after the churning is complete.

Although I had long wished to try adding rhubarb to my gelato alla vaniglia, I had never done it until now, for no particular reason. Rhubarb was unknown to me as food until my first vacation study in England, when I was 24. Then, I ate rhubarb pie (baked by my landlady) and rhubarb yogurt, and loved them both. However, a number of years passed before I managed to use rhubarb in my kitchen. 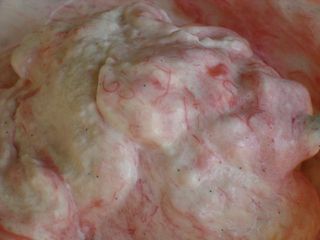 This year, I decided it was time I added rhubarb to my ice cream. To prepare it, I followed (to a certain extent) a recipe in the aforementioned book: I cut into 3/4"-long pieces half a pound of rhubarb and cooked it gently in a tablespoon of water until soft, then added a tablespoon of sugar and a half a tablespoon of agave nectar and stirred. I processed the rhubarb in the blender very briefly before putting it in the fridge to chill. Once the gelato alla vaniglia was ready in all its sweet, creamy glory (its smell is heavenly), I scooped it into a medium bowl1 and added the rhubarb by spoonfuls, swirling it in with a spatula to create a marbling pattern. I then served the result, which was a resounding success, as certified by the head of my quality assurance department (a.k.a., my husband).

After almost 10 years, I still enjoy making ice cream and people who try it usually like it. When I see a person's face light up as the creamy delight starts to diffuse in his or her mouth, I feel I have the power to contribute to the world's happiness, one small spoonful at a time. By the way, when we visit Italy now, my husband misses my gelati and sorbetti (sorbets).

A final note: the flavor of ice cream and sorbet depends heavily on the quality of the ingredients. I use organic milk and cream (latte e panna), pastured eggs (uova) and organic fruit as ingredients.

1 I used a lidded plastic bowl, which then went into the freezer with the leftover ice cream, after I covered the surface of the ice cream with a square of wax paper.

This post is my contribution to the current edition of Fresh Produce of the Month, an event created by my friend Marta, An Italian in the US, that this month focuses on rabarbaro. Here you will find the roundup of the event and the announcement of the next edition.

Posted by Simona Carini on May 29, 2009 in Dessert, Fresh Produce of the Month, Recipe | Permalink

Simona, what about egg yolks, does gelato have contains any?

Not sure you want to try this but when I make ice cream, I re-heat the infused cream to simmer (in your case the non-fat milk), then temper the yolks with it. The heat in the cream is enough to pasteurize the eggs and make the custard, this saves me a step, a possible overcooking, and a pot to clean. Since I have done this I have never went back to the stove cooking.

I love rhubarb! Sometimes I make little jams with it and other fruit like blackberries or strawberries.

Try infusing the milk with lemon verbena and then add some strawberry puree to the ice cream, unbelievable!

Each year I say I have to buy an ice cream machine but I don't. It's not about the cost, but I know if I eventually buy it I shall not stop using it. I am drooling with your icecream.

Ooh what a creative gelato flavor. I bet this was sublime.
I need to start cooking with rhubarb. I'm inspired. Thanks Simona!
LL

Yes, a very creative gelato flavor. Gelatos were one of the best things about my visit to Italy. ;-) I'd love to taste yours.

Thanks, Marta. We'll make it happen ;)

Ciao Laura. Certainly. I use whole eggs and egg yolks. Thanks for the suggestion: I'll try it. You know, I actually planted some lemon verbena on purpose to use it in ice cream, but my seedling did not survive the freezing nights last winter. I will try again. Rhubarb and blackberry jam: nice! After a good experience last year, I am planning to make more jam this summer, so thank for the suggestion.

Dear Ivy, you should yield to the temptation: it's really satisfying to make frozen desserts at home.

You are welcome, Lori Lynn. I actually made a savory dish using rhubarb, but it wasn't as successful as the ice cream.

Dear Paz, I hope you will taste my ice cream some day: it would be so much fun.

Simona,
Although I know of Rhubarb,I never came around to using it in any way,and now I am intrigued.Like I said before your investment is really admirable!

Ciao Mia. It is actually quite easy to use and it has a very interesting flavor. I am wondering: can you find it in the stores where you live?

That is so cute about your husband now missing your ice creams and sorbets!

The vanilla ice cream in your photo looks so creamy and wonderful, and I love seeing the specks of vanilla bean. Hmm. Maybe one day I'll invest in an ice-cream maker and try my hand.

Hi Lisa. The smell of vanilla is also heavenly. My ice cream maker is probably the kitchen gadget that I use most, together with the food processor. I actually managed to wear out the original one last year, and had to retire it after nine years of honorable service.

I swear, I must be the last food blogger without an ice cream maker. After describing the smiling faces of those who eating your delicious ice cream, I'm reconsidering. :)

Gelato is such a misunderstood concept in this country. Great post. I love the use of the word variegato in the title!

Ooohh, I absolutely love the tanginess of rhubarb with something sweet. It sounds wonderful in your gelato!

I have found ice cream and sorbet making quite rewarding. Hence, I support your plan to reconsider, dear Susan.

Thanks, Jeremy. I like the word variegato a lot.

Thanks, Shannon. The pairing is indeed quite delicious.