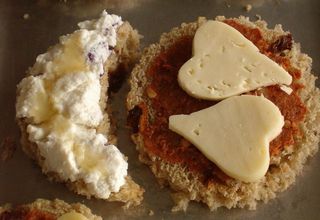 The title of this post should have been tramezzino (triangular sandwich). But life had other plans and so it is tartina. By the way, in Italian we also use the word canapè. Tartine lined up on a tray were one of the attractions of parties when I was a child. Round or rectangular, made of pancarrè (also called pane in cassetta, sandwich loaf) and multi-layered: first butter, then slices of hard-boiled eggs or of smoked salmon, or some tuna salad, and finally gelatin. I think the latter was not always there, but it was a big hit with my young palate.

But at the beginning, it was supposed to be sandwich, tea sandwiches to be precise:

RUTH: I am profoundly disturbed, Madame Arcati, and I want your help.
MADAME ARCATI: Aha! I thought as much. What's in these sandwiches?
RUTH: Cucumber.
MADAME ARCATI: Couldn't be better. [she takes one] Fire away.

I beg to differ, but I forgive Madame Arcati, since she is a charming character in Noel Coward's 1941 play Blithe Spirit. I have not seen the play itself, but I have enjoyed enormously the 42nd Street Moon's production of the 1964 musical inspired by it, called High Spirits. Our evening at the theater was great fun and it prompted me to read the actual play.

Charles Condomine invites Madame Arcati to hold a séance at his house. He doesn't tell her, but he is merely interested in observing her to get material for a book he's writing. His wife, Ruth, and two guests are also present. At the end, Charles is visited by the ghost of his deceased wife, Elvira, whom only he can see. Elvira becomes the ghost-in-residence of the Condomines' house, an unacceptable situation for Ruth. In the scene above, Ruth asks Madame Arcati to send Elvira back. This is not an easy task, and a few more things happen, culminating with an intense effort by Madame Arcati during which sandwiches are on stage, though they are not offered to any of the characters. By then there are two ghosts in the room. We then get to the final scene, where the focus is on Edith, the maid, and, briefly, on sandwiches again:

MADAME ARCATI: Give her a sandwich.
EDITH [drawing away]: I don't want a sandwich. I want to go back to bed...
CHARLES [handing EDITH the plate]: Here, Edith.
MADAME ARCATI: Nonsense—a big healthy girl like you saying no to a delicious sandwich—I never heard of such a thing—sit down.
EDITH [to CHARLES]: Please, sir, I...
CHARLES: Please, do as Madame Arcati says, Edith.
RUTH [sitting down and sniffing]: I haven't done nothing wrong.

You can enjoy the story from beginning to end by watching the play, or reading it like I did, or by watching the musical or one of the movies (1945 and 1956). I will not reveal what happens at the end, but I will tell you what is the closing statement (by a character that shall remain unnamed):

Good-bye again—parting is such sweet sorrow.

I have been experimenting with a King Arthur Flour's recipe for oatmeal bread (pane all'avena), which makes a very nice sandwich bread. The last specimen I produced was really excellent and therefore I decided to use it to make some tramezzini to offer to Madame Arcati, though I would hold the cucumber. At the last minute, however, I changed plans and decided to make butterless tartine instead. I have not yet asked Madame Arcati whether she likes tartine as well as she likes cucumber sandwiches. I trust she will. To begin with, my oatmeal bread looks and smells a lot better than the white pancarrè of my childhood memory. The original recipe is available here. I made several changes to the ingredient list and one important change to the execution. As I mentioned in a recent post, every month I get some truly special grains as my share of the Shakefork Community Farm. 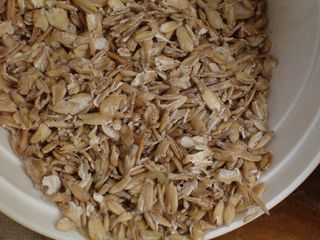 The share includes cracked oats, which make great oatmeal and which I am using in the bread. When I made the bread the first few times, I soaked the sifted cracked oats in the warmed up milk for half an hour or so before use. Then I took a class on making sourdough bread, and a brief exchange with the teacher made me try an overnight soaking for the cracked oats. The result has been such that I have been doing it ever since. With all my tweaks, the list of ingredients is as follows:

And the difference in the execution is that I warm up the milk and soak the cracked oats in it overnight, in the fridge once the milk has cooled. The morning after, I warm it up again before use. 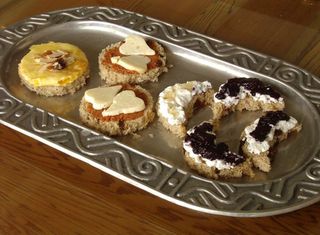 The toppings of my tartine were (from the left): frittatina decorated with sliced almonds (mandorle), muhammara and heart-shaped slices of Colby cheese; ricotta and miele alla lavanda (lavender honey); ricotta and marmellata di mirtilli (blueberry spread). Most of the ingredients were homemade by me (no, not the honey). My tartine, served for breakfast, were a success.

As a closing note, if you are interested in seeing the musical and you live in the Bay Area or thereabouts, the show is at the Eureka Theater in San Francisco and it will run until April 12. If you live in NYC or thereabouts, you can see the play at the Shubert Theater on Broadway.

This is, as you may have imagined, my contribution to the seventh edition of Novel Food, a literary/culinary event that Lisa of Champaign Taste and I cooked up a few seasons back and have been co-hosting ever since.

My portion of the roundup is here and Lisa's portion is here.

I know this play! Or rather, I heard about this play from a friend who saw it in New York, and enjoyed it very much.

I love the whole concept of tea as a meal. Mmmm, you got me thinking about cucumber sandwiches... Is it lunchtime yet?

Your little sandwiches are darling! I love all of the toppings, especially the egg and the ricotta with honey - mmm. And of course -- the bread looks and sounds divine.

I like reading plays, too, although I haven't read a play in a long time. I remember reading T.S. Eliot's The Cocktail Party aloud with my dad; we'd take different parts.

Sounds like you had a great time at the theatre; makes me wish I were in SF or NY. :)

Thanks for another round of Novel Food, partner!

All your tartine sound amazing so does your bread.

Hi Adele. I read good reviews of the NYC show (where Rupert Everett plays Charles Condomine). The dialog is sparkling and totally enjoyable.

Hi Mar. Afternoon tea can indeed turn into a meal. It sounds like you like cucumber sandwiches.

Thanks Lisa. I have never read aloud a play, though I remember one of my English teachers in college saying that it was important, since the words are written to be spoken aloud. It's always a pleasure to do this with you, so much fun.

Hi Ivy. It's an excellent bread and not too time-consuming to make. It also freezes well.

I'd love to taste your sandwiches. Your bread sounds and looks really good.

Love how your little sandwiches look on that platter.
LL

Hi Paz. The bread is really good and the play is running now, to very good reviews.

Thanks, Lori Lynn. It was a fun project.