Some time ago, I mentioned finocchio as one of the elements of a traditional Italian appetizer called verdure in pinzimonio, which includes a selection of raw vegetables (carrots, celery, fennel, radishes, etc.) to be dipped into a sauce made of olive oil, salt and pepper, and possibly vinegar or lemon juice. Each guest gets his or her own small plate of sauce.

Growing up, I ate fennel salad often, the bulb cut into bite-size pieces and seasoned with the usual combination of oil, vinegar and salt. You can slice the fennel thinly instead: I like the bite-size version, because each morsel causes a little explosion of flavor in your mouth. Sometimes my mother would serve fennel cut vertically into 6 or 8 sections at the end of a meal, to be eaten plain: its crisp flavor is quite refreshing. I didn't know that finocchio is called Florence fennel here.

Until recently, my favorite way of eating cooked fennel was au gratin. Then, to the old preference a new one was added: Fennel and Leek Soup with Fennel Greens (zuppa di finocchi e porri con foglie di finocchio) a dish that has become an instant hit in the household. The recipe comes from my beloved Vegetarian Cooking for Everyone by Deborah Madison. In it, Madison suggests to use the trimmings from its ingredients to make Quick (vegetable) Stock, something I recommend doing, because the result is a deeply flavored soup that will enchant your palate. I ended up making more stock than I needed for the soup, so I froze the rest, which means I have a little stash for future use. 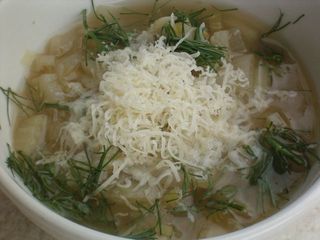 I followed both recipes to the letter, halving the quantity of the ingredients for the soup and substituting the cream (which in any case is optional) with some of my own cheese, freshly grated. The thinly sliced fennel and potato and the chopped leek and onion form a great quartet of flavors, with the vegetable stock providing the background and the fennel greens a tasty decoration.

This post is my contribution to the current edition of Fresh Produce of the Month, an event created by my friend Marta, An Italian in the US. You have a few days left to send your fennel-flavored ideas to Marta.

Posted by Simona Carini on April 23, 2009 in Fresh Produce of the Month, Recipe, Vegetable | Permalink

Hi Simona! We call this "fin-oik".
Oh how we love to mess up the proper Italian language! haha

I just cooked with some fennel the other day~it is a wonderful veggie!

Very nice! I didn't know it was called Florence fennel either. Thank you so much for taking part to the event!!!!

The soup sounds lovel;y, so fresh and vibrant. Great with your cheese on top too.
LL

Ohhh Thank you so much for reminding me the delight of fennel!Im now dying to try this really lovely recipe aswell as returning to the fresh salad for warmer days to come! Grazie!

Very nice. I like fennel, though I don't eat it a lot.

That is so cute, Maryann.

Indeed, it is Jann.

You are welcome, Marta: it is always fun.

It is very nice, Lori Lynn and you are right: the color is vibrant.

Prego, Mia. Where I live, we get cool evenings in the summer when a nice soup is perfect.

Ah, fennel. Next to artichokes, it must just be my favorite vegetable. My favorite combination is with sweet oranges and salty olives.

Fennel... the forgotten veg in our house. I love it - when I think of buying it, particularly in summer. It goes so well with barbecued foods... I think they hide it at the markets....

Hi Susan. I also love artichokes and grew up eating them. I remember reading about this salad on your blog. My mother often makes a salad with oranges and olives: it is a delicious combination.

Hi Katie. Fennel with barbecued foods sounds great. I hope you can get the sellers at the market to share their bounty with you.

I love sliced fennel, red onions, fresh tomatoes, and a vinaigrette of olive oil and wine vinegar. Salt and pepper as you like. It's so quick and easy and very pretty too. A perfect summer salad.