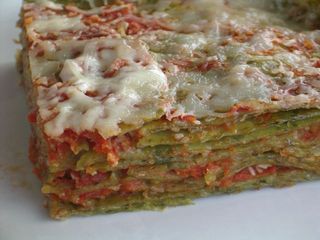 The March 2009 challenge is hosted by Mary of Beans and Caviar, Melinda of Melbourne Larder and Enza of Io Da Grande. They have chosen Lasagne of Emilia-Romagna from The Splendid Table by Lynne Rossetto Kasper as the challenge.

I grew up eating my mother's lasagne and had so far avoided trying to follow in her footsteps, because it is a tall order. She makes her own pasta all'uovo (egg pasta), with consistently excellent results. She makes the béchamel sauce, she prepares il ragu (tomato and meat sauce) using the bottled puréed tomatoes that she makes at home every year. While I had made pasta before, making do with a spianatoia (kneading board) smaller than the one my mother has, I had limited myself to fettuccine and never ventured near lasagne. You can make fettuccine, cook them and then add as simple a sauce as some freshly made ricotta. But with lasagne, the pasta is only one chapter of the story.

Thanks to this month Daring Bakers' challenge, I pushed the envelope, so to speak, but not before conferring with my mother and getting some instructions from her. But let's go in order and review each component of the dish and then the final assembly. You will find the recipes here. I decided to make half the dose of pasta.

My mother has never made pasta all'uovo verde (spinach egg pasta), so for this part I was on my own. I was intrigued by the option with raw spinach, but worried about the resulting texture. I decided to consult Deborah Madison and she was very helpful. In Vegetarian Cooking for Everyone, her spinach variation for egg pasta involves the puréeing of fresh spinach and eggs. This worked out perfectly: I easily combined the resulting paste with the flour to obtain pasta of a beautiful green color.

For the béchamel sauce, I followed the proposed recipe, halved it, and went vegan, using whole-wheat flour, olive oil instead of butter and vegetable broth instead of milk. I have actually been making béchamel sauce this way for years, again following Deborah Madison's recipe.1

For the sauce, I went vegetarian and made a simple tomato sauce. I cooked in warm oil a quarter cup of minced onion, a small carrot, sliced, and a small rib of celery, chopped. When the vegetables were soft, I added a 14.5 oz. can of diced tomatoes and simmered for 10 minutes or so. I then used an immersion blender to purée the sauce.

For the cheese, I grated the last piece of my Montasio. 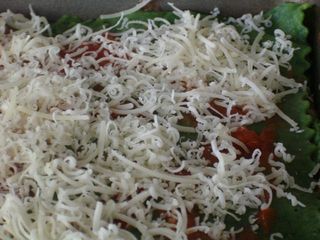 I cooked the lasagne verdi and drained them, as I remember seeing my mother do. I then assembled the dish following the given instructions and my mother's recommendation to go light with the besciamella. I used up all the béchamel and all the tomato sauce before the pasta, so next time I will make more of both. Following my mother's instructions, I did not finish with a layer of béchamel sauce. The top layer of my lasagne was tomato sauce sprinkled with cheese. The baking time and modality was done according to the recipe here.

The result was very favorably received at the table. I was so glad! I feel that I have passed a big test. Of course, I will make lasagne again.

A special thank you goes to our hosts for their efforts and support: it was a nice challenge. I hope you will take the time to go around and look at the gorgeous creations of my talented fellow Daring Bakers. By the way, have you noticed the new logo? Daring Bakers has also a new site.

1 As Angela correctly notices in her comment, the change of ingredients makes the sauce a vegetarian velouté.

That lasagna sounds delicious and where better to get an original Italian recipe than from an Italian.

Your lasagne looks perfect! I usually make my bechamel with half milk and half vegetable stock to save a few calories and it's really delicious. Nice to know it works with all stock, which I think makes it a veloute?

Bravo Simona!beautiful job,looks like youve been doing it for yrs!maybe unconciously learning through your taste buds.. :)
Im so happy for you that you took the 'plunge',it must feel great to continue the family tradition? I would looooove to know how your mother does her own bottled pureed tomatoes..??

Yours looks beautiful! The layers are nice and thin and the whole piece looks well-formed. I'm afraid mine was a bit less photogenic but I enjoyed the challenge of it nonetheless :) Great job!

Wow~this looks delicious! This certainly required time and lots of prep work..... and it certainly paid off! Cheers!

That beautiful looking lasagne seems like a true labor of love. I'll bet it was delicious!

Thanks, Ivy. It feels good to carry on a long tradition.

Hi Angela. You are right! I have never tried to use half and half: thanks for the suggestion.

Thanks, Mia. I will ask my mother for the sterilizing part, the details of which I don't remember, then let you know.

Hi Shannon. I think the important thing when you make something for the first time, is to get a benchmark. Then, when you make it again, you can adjust the recipe.

Thanks, Jann. It is an intense undertaking, for sure, but one can make the pasta in advance, which I may do the next time.

Hi Christine. Now that I know that I can make lasagne, the next step is sharing it with guests.

Your lasagne looks delicious. I love the many thin layers, and the green pasta.

Your description of your mother's lasagne is wonderful, and how lucky you were to eat that kind of food growing up. Do you know, I had never heard of using bechamel in lasagne until I was about 30 years old? Someone made it that way and I ate it and thought it was the best thing ever. Until then, I'd only had lasagne made with ricotta.

Really great lasagna...especially like the idea of combining the eggs adn spinach in a paste to make the pasta. Lovely!

Hi Lisa. I had never heard about lasagne with ricotta until I moved to this country. My mother occasionally would use mozzarella instead of béchamel, because one of my uncles did not like it. Well-made lasagne are indeed one of the best foods ever.

Hi Elle. That was indeed a good idea. I am glad I thought of checking my beloved cookbook.

that looks just perfect. i tried making lasagna once (the american way) and it was a disaster. i haven't dared to again.

Thanks, Bee. I hope you try again: it is a fun project. The recipe for pasta that we used is a good one, and then you can adjust the other elements as you wish.