(the English lime is also used in Italian)

I didn't know lime existed until, some time during my childhood, a TV advertisement showed a small green fruit, called lime dei Caraibi (Caribbean lime), together with a bright green shampoo (shampoo) — or maybe it was a bubble bath (bagnoschiuma). The association established by the advertisement between lime and green-colored personal hygiene items has been hard to erase from my mind, so buying and using limes does not come natural to me. Before I get out of the bathroom, let me add that the Italian word limetta has another meaning: nail file.

A little while ago, I saw a yellow lime surrounded by green companions and purchased it out of curiosity: I wanted to see what color it was inside. It was green! I loved the color contrast and should have taken a photo, but it was dinner time, there was no natural light and I was about to use the lime to make the recipe which follows. The next time I visit the store where I made such an interesting purchase, I will look for another yellow lime. 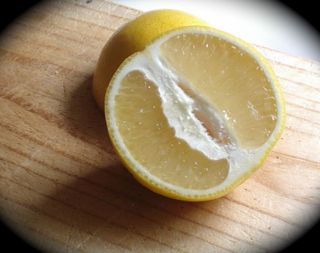 While shopping at another store, I saw a fruit called sweet lime (limetta dolce) and, of course, I had to try it. It looks like a lemon and it is indeed sweet, so I realized that it is a sort of edible contradiction, since the reason we treasure limes is their sharpness. If that quality is not there, what's the use? I still have half of the sweet lime and I am trying it in different settings, but have no success to report. Do you have any suggestion? 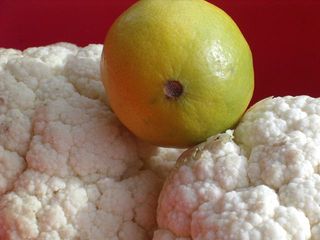 I have been making the following variation on the theme of cavolfiore arrosto (roasted cauliflower) for a couple of years. It was inspired by a recipe in a magazine called Healthy Cooking. I bought the October 2006 issue of the magazine out of curiosity (a title on the cover said Cook like an Italian...), as I had not seen it before and I don't think I have seen it ever since. I made a few changes to the original recipe, the last one of which is the use of succo di limetta (lime juice) instead of succo di limone (lemon juice).

Preheat oven to 425 F.
Cut a large head of cauliflower (or two small ones) into florets (cut large florets in half) and place in an oiled baking pan.
Bake for 12 minutes.
In the meantime, prepare the following in a small bowl:

Take the pan out of the oven, add the prepared mixture, stir, then distribute two tablespoons of finely chopped toasted pecans over it. Return the pan to the oven and bake until the cauliflower is ready to your liking, another 12 minutes or so. Add salt, to taste, stir and serve immediately.

This is my contribution to the event Fresh Produce of the Month: Citrus Fruit (other than lemons and oranges) created by my friend Marta, An Italian in the US, and hosted this month by yours truly.

Posted by Simona Carini on February 26, 2009 in Fresh Produce of the Month, Fruit, Recipe, Side Dish, Vegetable Dish | Permalink

I would love to try the sweet lime :)

This would be very refreshing Brciole:D

Hi Maryann. It is indeed an interesting experience: the expectation gets upset.

Hi Simona, in summer i use to eat a lot of ice-cream done with this lovely fruit...very good

Gosh, I am late, I made a lime pie for your event, but haven't photographed it or posted it yet. I am going to try to get this to you by tonight, OK?
LL

this sounds lovely i am going to have to try making cauliflower this way!

Ciao Baol. You know, it is a flavor of ice cream that I have not yet tried to make. I'll let you know when I do. Kisses back: hope everything is going well. Hang in there: spring is coming soon.

Hi Ms Gourmet and welcome. I hope you do: it is really tasty.

Nice! Having personally tasted your delicious creations of baked veggies, I'm sure that this is as good as one can imagine from the enticing ingredient list.

Grazie, Marta. This is a dish I've made often: it is easy and the result is tasty.

In Mexico we use limetta (we call it lima) on traditional recipes such as sopa de lima. We also eat it as it is in posadas and around christmas. It makes one mean lima pie

Hi Sofia. "Sopa de lima" sounds quite appealing: I will look for a recipe. Thanks for sharing interesting information.