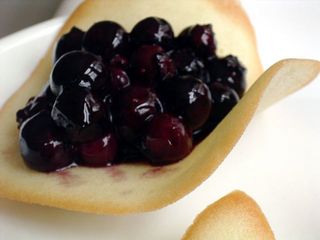 This month's challenge is brought to us by Karen of Bake My Day and Zorra of 1x umruehren bitte aka Kochtopf. They have chosen Tuiles from The Chocolate Book by Angélique Schmeink and Nougatine and Chocolate Tuiles from Michel Roux.

The French word tuile means (roofing) tile in English, tegola in Italian. The word is also used to indicate a thin, light cookie whose curved shape reminds one of a roofing tile. I find it interesting that a word originally indicating something rather heavy, is used to describe something that is the total opposite in terms of weight. In Italian, mi è caduta una tegola in testa (literally: a tile fell on my head) means: something serious and unexpected happened to me.

I like the idea of lightweight cookies in the shape of tegole, though I shaped my tuiles differently, as we were allowed to do. The challenge included different recipes (one of them savory) and I chose the first one, from The Chocolate Book by Angélique Schmeink (you can find all the recipes on the hosts' blogs here and here). The batter was easy to assemble and to work with. I had a sheet of mylar at home, which I used to create a stencil, with the help of a star-shaped and a heart-shaped cookie cutter. I also decided to try and spread the batter in a sort of free form that would allow me freedom in post-processing the tuiles, i.e., in shaping them after they were baked. I must admit I did not plan my actions in advance, so the whole process had an haphazard quality to it, or maybe I should say a creative quality. 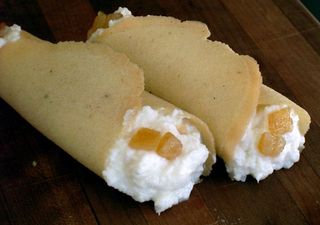 I shaped the hearts and stars as well, using the top of a vitamin bottle and the tip of my wooden pestle to make small baskets. I rolled the free form (roughly rectangular) tuiles into cannoli and from there to making a lighter version of the famous Sicilian pastries (cannoli siciliani) was just a step, aided by the fact that I had some leftovers from the experiment described at the very end of my previous post. I sweetened the ricotta with a small quantity of lavender honey, then filled the cannoli, and finally decorated the ends with some diced candied orange peel. Not shown in the photo is the cocoa version of the cannoli, obtained by adding some cocoa powder to the batter. I decorated those with chocolate chips. 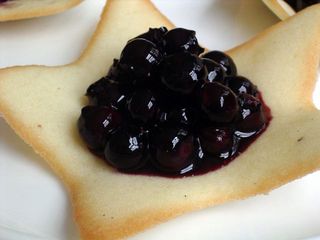 For the heart- and star-shaped tuiles, I chose a blueberry filling. I have a substantial amount of frozen mirtilli in my freezer, and love to use them in novel ways. I put some blueberries in a bowl, added a touch of miele (honey) and finely thawed them in the microwave, then let them cool. The assembled baskets were a pleasant surprise for my husband's breakfast and they were fun to photograph.

A special thank you goes to our hosts for their efforts and support: it was a nice challenge. I hope you will take the time to go around and look at the gorgeous creations of my talented fellow Daring Bakers.

Brava, Simona! I rolled and filled mine too! Great minds think alike!

I am happy to add "tegola" to my vocabulary. Love the heart and star shapes Simona!

Thanks, Lori Lynn. For once I am happy with the look of my production. It gives me hope that I can improve in the aesthetic department.

Beautiful job! I paired some of my tuiles with blueberries, too. I loved the contrast in color :)

Those look really good. I love the combination of blueberries and honey. Sometimes for dessert I'll dip fresh blueberries in honey. Delish!

Hi Diana. I have a whole bunch of frozen blueberries in my freezer, so I am always looking for new ways of using them. I agree: blueberries and honey are a perfect pair.

I love the idea of making canolis out of the tuile batter. Don't know why I didn't even think of that!

Hi Y. I think cannoli with the Keller's recipe would be awesome. I will try that soon. I'll have to come up with a fitting filling.

They look lovely, Simona. Tuiles, depending on the recipe, can be tricky business. Considering your "haphazard" approach, you did very well, indeed. With your assortment of fillings, I would be hard pressed to choose a favorite.

Thanks for your kind words, Susan.