Oh, that supper-table! [...] In the centre stood the Raycie épergne1 of pierced silver, holding aloft a bunch of June roses surrounded by dangling baskets of sugared almonds and striped peppermints; and grouped about this decorative "motif" were Lowestoft platters heavy with piles of raspberries, strawberries and the first Delaware peaches. An outer flanking of heaped-up cookies, crullers, strawberry short-cake, piping hot corn-bread and deep golden butter in moist blocks still bedewed from the muslin swathings of the dairy, led the eye to the Virginia ham in front of Mr. Raycie, and the twin dishes of scrambled eggs on toast and boiled blue -fish over which his wife presided. Lewis could never afterward fit into this intricate pattern the "side-dishes" of devilled turkeylegs and creamed chicken hash, the sliced cucumber and tomatoes, the heavy silver jugs of butter-coloured cream, the floating-island, "slips" and lemon jellies that were somehow interwoven with the solider elements of the design; but they were all there, either together or successively, and so were the towering piles of waffles reeling on their foundations, and the slender silver jugs of maple syrup perpetually escorting them about the table...

Lewis Raycie is the protagonist of Edith Wharton's novella False Dawn, the first of four collected in the volume "Old New York" (1924). The special supper described in the excerpt celebrates his coming of age and also his imminent departure for a two-year long Grand Tour. The day after, Mr. Raycie, during their parting meeting, gives his son the task of buying some paintings, "a few original specimens of the Italian genius." It is Mr. Raycie's ambition to create a Raycie Gallery:

"Raphael, I fear, we can hardly aspire to; but a Domenichino, an Albano, a Carlo Dolci, a Guercino, a Carlo Maratta — one or two of Salvator Rosa's noble landscapes..."

Lewis goes to Europe, meets a person who influences his artistic taste (later on, we learn that it is John Ruskin), buys paintings by, among others, Giotto, Piero della Francesca, Fra Angelico, Carpaccio, and comes back to the United States elated. His enthusiasm, however, does not find the reception he had hoped for. Here is a sample of Mr. Raycie's comments:

"God! God! God! Carpatcher, you say this other fellow's called? Kept him back till the last because it's the gem of the collection, did you? Carpatcher — well he'd have done better to stick to his trade. Something to do with those new European steam-cars, I suppose eh?"

Lewis stands by his choices, notwithstanding his father's reaction and other people's lack of appreciation. After Lewis passes away, his collection... I should not detail here what happens, but will give you a taste:

Lewis Raycie is a romantic hero, who comes to feel he has an important mission to accomplish. Yet, for all the joy the artistic expressions he encountered in Europe brought to him, he missed his home's supper table:

Oh, that supper-table! The vision of it used sometimes to rise before Lewis Raycie's eyes in outlandish foreign places; for though not a large or fastidious eater when he was at home, he was afterward, in lands of chestnut-flour and garlic and queer bearded sea-things2, to suffer many pangs of hunger at the thought of that opulent board. 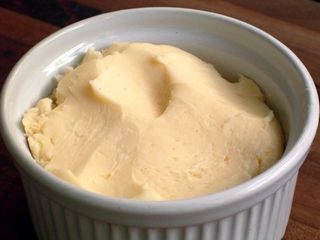 A lover of my favorite painters, Lewis Raycie touched my heart, so I decided to recreate for him a small corner of that sumptuous table. The season not being right for "raspberries, strawberries and the first Delaware peaches," I focused my attention on the "piping hot corn-bread and deep golden butter." Making butter at home was already on my to-do list, so that is what I worked on first. I enjoyed every minute of the transformation that occurs inside a jar containing ripened cream, shaken consistently for a few minutes: the separation of butter from buttermilk (latticello). 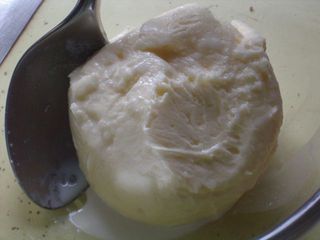 The first time I made butter, I was too focused on the process to stop for photographs, but took a couple of shots of the final product (see above). The second time, I was a bit more organized and took the photo on the right: this is the butter right after I finished the shaking (and poured off the buttermilk), and before I washed it with ice-cold water. There is also a not great photo of the buttermilk left behind (see below). 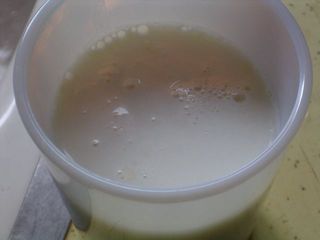 To make butter, I followed the instructions given in "Home Cheese Making" by Ricki Carroll. The process of making butter using a food processor is described on this page, where the shaking method I employed is offered as an option. A few notes: I used pasteurized organic heavy whipping cream (panna fresca), brought to room temperature and ripened according to the recipe, shook it in a canning jar and did not add any salt to the finished product. Both times I used a cup of cream.The butter became an ingredient of a recipe that I will post in the near future. The buttermilk was lost the first time, due to my impatience. The second time, I saved it and used it to make the other item from the Raycie's supper table: cornbread (focaccia di granturco). I chose this recipe, because it uses buttermilk and also because I wanted to try to bake cornbread in a cast iron skillet. Since butter making had produced only had half a cup of buttermilk, I added 1/3 cup of non-fat milk and one egg yolk to make up for the remaining half a cup. 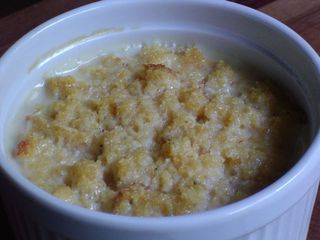 I don't know if Lewis Raycie would have liked my cornbread, but we did (once again, no photo, due to a bad lighting situation). With some of the leftover cornbread I then made Indian Corn Bread Pudding. I used non-fat milk, agave nectar as sweetener, and two slices of my cornbread instead of a corn muffin. The result was well received, so I made it again.

Back to the author of the novella that inspired me: I have been an admirer of Edith Wharton, since reading "The House of Mirth" in college and I keep going back to her novels and stories. My favorite among her short stories is Roman Fever. A few years ago, I visited The Mount, in Lenox (MA), the house and garden Wharton designed for herself.

1 An ornamental centerpiece for a dining table, typically used for holding fruit or flowers.
2 I really couldn't tell what this referred to, from which you can guess I am not into mussels. Many thanks to Rachel and Carol for their suggestion.

This is, as you may have imagined, my contribution to the sixth edition of Novel Food, a seasonal literary/culinary event that Lisa of Champaign Taste and I cooked up last year and have been co-hosting ever since.

My portion of the roundup is here and Lisa's portion is here.

or launch the burro fatto in casa audio file [mp3].

Surely try to make it one day.

You've made me want to dive into some Edith Wharton right now. What a lovely post. Maybe the queer bearded sea-things are mussels?

Lovely. I read "Age of Innocence" in English class, but I'm not familiar with Wharton's other works. Maybe I'll have to borrow a copy of False Dawn from the library.

I recommend it, Jorge. Thanks for your visit.

Thanks Rachel for the suggestion! I find myself going back to Edith Wharton's writing over and over again: I love her style.

The Age of Innocence is a very nice story (it was also made into a movie some years ago). I hope your library carries the book. Reading it online is not as comfortable.

Simona, what a beautiful post. I loved reading the excerpts and hearing about the interesting story. And, that supper table! My God.

Your butter looks so good. I've wanted to try making butter for a couple of years now; you're leading the way! And the cornbread AND Indian pudding sound delicious; I'm sure Lewis would have approved.

I agree that the queer sea things with beards probably refers to mussels (my two cents' worth).

Thanks for being my partner in this event!

Thanks, Lisa. Making butter is really nice, so I hope you'll try soon. That description is quite incredible, isn't it? There is actually general consensus on the bearded things being mussels. You are welcome: it was, as usual, fun and pleasant.

There's nothing like Wharton's food narratives to leave you feeling fat and sated after reading them.

What a lovely, lovely post, Simona. We are hoping for a New England getaway in spring. Now I want to add The Mount to our itinerary. :}

Thanks, Susan. I'd like to know if you visit The Mount.