A couple of posts on creative use for panettone by Marie of Proud Italian Cook and Lori Lynn of Taste With the Eyes have given me the idea for a quick note about Italian sweets traditionally associated with the Holidays. Exhaustiveness is out of the question, as every region has its own traditions and a lot of them are unknown to me. I will therefore talk only about the dolci my family and I enjoyed this time of the year, when I still lived in Italy.

Both panettone and pandoro are of soft, delicate texture. Panettone is studded with uvetta (raisins) and canditi (candied orange and citron peel), while pandoro is plain inside. At home, we used to put the pandoro on the termosifone (radiator) to warm it up slightly, before sprinkling zucchero vanigliato (powdered vanilla sugar) on top. The names panettone and pandoro contain the word pane (bread), suggesting that they are special breads, made for particular occasions. 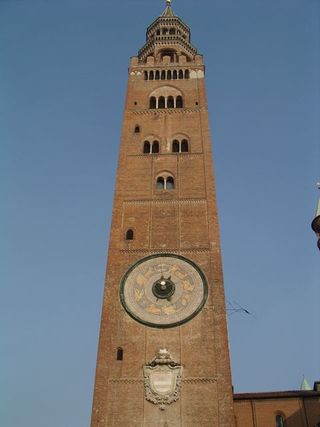 My father's favorite Holiday sweet is torrone. There are several versions of this nougat that belongs to a very old tradition. My preference goes to torrone ricoperto di cioccolato, hard torrone covered with dark chocolate. The tower in the photo is the Torrazzo of Cremona, called torrione in Medieval time, from which torrone got its name. We paid a brief visit to the beautiful city during our recent visit to Italy.

Another special bread is panforte (literally, strong bread). In the pasticcerie in Siena, panforte is made in large wheels and you ask for a slice. I like that better than the smaller size, thinner panforte (about 1/2"-thick and 9" in diameter) more commonly available in the stores. There are different kinds of panforte and my favorite is the chocolate one. The final item on my father's shopping list (he was the one entrusted with this part of the Holiday shopping) was pinoccate, a tradition of Perugia, my home town.

After Epifania (Epiphany, popularly called la Befana, celebrated on January 6), it is common to find panettone and pandoro sold at half price. A not so fresh panettone is still a great ingredient for, among other dishes, a variant of zuppa inglese. My favorite way of enjoying panettone is plain and simple: a thick slice, in which to sink teeth and nose, accompanied by a mug of hot caffelatte. Many an evening I made that to be my dinner, a sweet meal conducive to sweet dreams.

Buon capo d'anno!
==============
Detectives Beyond Borders
"Because Murder Is More Fun Away From Home"
http://www.detectivesbeyondborders.blogspot.com/

Buon Anno to you as well, Peter.

Thanks Maryann, same to you and your family.

I like the sound of the thick slice of panettone with hot chocolate for me. ;-)

It always begins to look a lot like Christmas when you see the distinctive boxes of panettone stacked up in the markets. It's one of my favorite light cakes. A great and sweetly festive post.

It's so great that you wrote about panettone, panforte, pandoro -- I love panettone, it always says "Christmas" to me. I love to warm it or slightly toast it and put butter on it. Your making a dinner of it and coffee-milk sounds wonderful.

And torrone! Coincidentally, my sister sent us one of those (from Williams-Sonoma) this year! It was in a beautiful red box with gold lettering, and the paper inside, covering the torrone, had scalloped edges and a decorative design printed on it. The packaging was as wonderful as the candy. The type was as you mentioned: covered with dark chocolate. Divine.

Happy new year! Looking forward to all kinds of tasty treats in 2009!

What a beautiful post! I learned about something, too - I didn't really know about pinoccate and actually, believe it or not, I don't think I ever had panforte.
Panettone or pandoro, hard dilemma. Recently I go for panettone too. :)

Hi Simona and Happy New Year to you! How fun to see Taste With The eyes mentioned. The Panettone French Toast was awesome, but after reading your post, I have more Italian holiday treats to seek out, especially the zuppa inglese with alchermes.

Panettone and hot chocolate is another great combination, dear Paz. Happy New Year to you!

It was always like that for me as a child, Susan. I could not wait to get that first box open and the first, fragrant slice on my plate. I am glad that the appeal has not diminished with time. Happy New Year to you as well.

That's a nice gift you've received, Lisa. Every Christmas my dad would forget which brand he liked better, so we got several kinds of torrone. They are a total treat. Happy New Year to you too!

Pinoccate have a limited geographical spread, so I am not surprised that you have not tasted them, Marta, but you should be able to try a piece of panforte. The best way would be to hop on a train and go to Siena and get a piece from one of the pastry shops there, and also some chocolate-covered ricciarelli: oh my!

It was so interesting to read both you and Marie describe the same use of panettone, something also you would not find in Italy. I just remembered that the first time I heard French toast mentioned was in the movie Kramer vs. Kramer. I found the scene on YouTube: http://www.youtube.com/watch?v=pmyfOquda-M
I also remembered about an Italian dish that I should talk about soon.

Simona, You mean tomarrow in Italy you would find pannetone half price? How cool is that? Although that might be mighty dangerous!! I'd love to have a cup of hot caffelatte and a slice with you some day!
Thanks for the link love ;)

Indeed, the end of season sale of panettone and pandoro is quite a temptation. I'd also like to meet you over panettone and caffelatte some day, maybe in a pastry shop in Milan, where they make the panettone fresh daily.