In German: Gewürz. The plural is aromi and in Italian we also have the plural word spezie. The reference to German is important, because the spice mix I will talk about arrived in a bright yellow package from Germany, compliments of Ulrike of Küchenlatein. It was not unexpected, since earlier this month I signed up to participate to Season's Eatings, an event engineered by Katie of Thyme for Cooking, the Blog. So, I knew I would receive something, but did not know what and from whom. 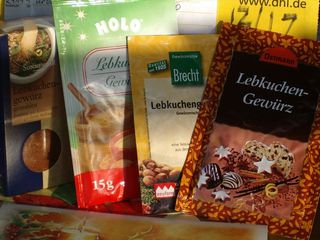 Ulrike sent me four different brands of the spice mix that is used to make the traditional Lebkuchen. She also sent me a couple of recipes, a Holiday card and a nice letter. Thank you so much, Ulrike!

She tells me that, as far as she knows, Lebkuchen is not the same as gingerbread. Coming from Italy, I am no expert on gingerbread, an item not yet in my culinary repertoire. In Italian, gingerbread is pan di zenzero (literal translation), something that, as a child, I thought it only existed in fairy tales (favole). Lebkuchen is translated by the dictionary I consulted as pan pepato, literally, bread containing pepper (pepe). Note that a kind of Lebkuchen is called Pfefferkuchen (Pfeffer is pepper in German).

After reading all the information received, I used one of the Gewürz packages. One of the recipes Ulrike sent me is for German Lebkuchen Loaf Cake, freely translated by me into pan speziato tedesco. The source for the recipe (Quelle in her post) is here (in English). I made the following adjustments to the list of ingredients:

Note: as shareholder of a grain CSA, I am the lucky recipient of, among other goodies, freshly-milled barley flour. I have been experimenting with barley flour in my baked goods and I know that it imparts a pleasant, nutty flavor to them. Hadn't I had it, I would have used whole-wheat flour instead.  I followed the given instructions and baked the pan speziato in a loaf pan.

Based on the color of the batter, I thought my Lebkuchen loaf cake would not come out the same as it did for Ulrike. But, lo and behold!, when I took the cake out of the oven it was indeed of a nice, enticing brown color and it smelled heavenly. It was not easy to wait for it to cool down. 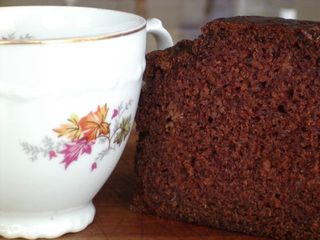 Finally, I cut a slice and tasted it: it was wonderful! I served the pan speziato as dessert accompanied by gelato al caffè (coffee ice cream) and gelato alla zucca (pumpkin ice cream). It is also great for breakfast, with a glass of milk, and for an afternoon snack, with a cup of tea. So, it is a pan speziato for all occasions.

The word aroma has also another meaning in Italian, which I will discuss separately, and that is why I added (1) to the title of this post.

Katie's lively account of the intricate web she wove for the event can be enjoyed here.

I got here from Nuria's & am amzed at your post. Such a load of information & spicy stuff at that. The loaf is gorgeous & I love the balance of spices you've used. Have a great holiday season!!

Hello Deeba, and welcome. Thanks for the kind words. Happy Holidays to you too!

Glad you liked it. I hope you had a nice and happy X-mas.

Hi Simona - that was an interesting post. I love learning the Italian translation for the spices. I wonder how I would do, after over a year of reading your blog, on a test. I wonder how I would score translating the food words back to English. I know I wouldn't do as well going from English to Italian. But at least if I go to Italy, I will be able to read the menu. I really do make an effort to remember them.

Hope you are enjoying the holidays!
LL

I love spice cakes and gingerbread! And the German variety have more spice flavor than the milder French versions. (And are a lighter tan in color) What a lovely treat. But you didn't really have to wait for it to cool, did you? I never could have...

dear simona,
here's wishing you and your family a wonderful 2009.

Thank you so much for your thoughtful gift, Ulrike. Happy New Year!

A very interesting question, Lori Lynn. I think you should be able to navigate menus and also grocery stores. Words that you've seen and heard here would look/sound familiar.

Same to you, Sra!

Hi Katie. It was hard, I must admit, and it was not really cool when I cut it. I love the flavor of the spice mix.

Thanks Bee, same to you and Jay.