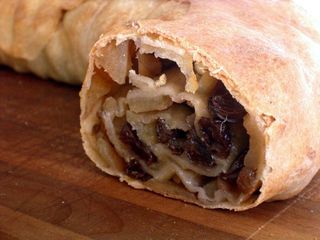 A thin layer of dough envelopes pieces of apple (mela), nuts and raisins. It looks like a strudel, but it isn't: It's my rendition of rocciata, a dessert that I used to eat at the house of family friends in Foligno (Umbria).

To create my own version of rocciata, I started with the recipe on the Accademia Italiana della Cucina site, then did some experiments, based on my personal taste. I had my mother confirm with our friend that she uses an egg in the dough. She also adds to it some mistrà, an anise-flavored liqueur. I sprinkle semi di anice (anise seeds) on the apples instead. There are many variations on the basic theme of this traditional dish. Some of them include a rich filling: I prefer a simpler ensemble that lets each ingredient shine.

The dough for rocciata needs to be rolled really thin. I am sure that if I saw an expert making it, I would then make a better rocciata, but I am happy with the way it is — even though it is not as faithful to the tradition as it could be — because it allows me to bring to life a delicious memory.

Ingredients for the dough:

* To prepare the walnuts, I bring a pan of water to the boil, add the walnuts and let them stand for one minute, then drain them and absorb the excess moisture with a towel. I spread the walnuts on a baking sheet and place them in the oven at 300 F until they have dried out, 15 minutes or so (instructions from "Vegetarian Cooking for Everyone" by Deborah Madison). I use a knife to chop them.

On a kneading board, combine flours and make a well in the center. Push aside a tablespoon of flour for later. Break the egg in the well and, with a fork, mix it with the surrounding flour. Add salt and sugar, then 4 tablespoons of the water and the olive oil. Mix with the flour to form a dough. Add more water (1-2 tablespoons) as you knead to make a soft dough. Use the flour set aside at the beginning to keep the surface non-stick. Shape the dough into a ball, cover it with a cloth and let it rest in a cool, dry place for 1/2 hour.

To prepare the filling, cover the raisins with lukewarm water. Put the apple slices in a mixing bowl and sprinkle them with cinnamon and lemon zest, then stir. Mix pine nuts and walnuts in a small bowl. Preheat the oven to 350 F. Line a baking sheet with parchment paper or a silicone baking mat. Drain the raisins. Roll the dough into a rectangle (or an approximation of it). I do this on a well-floured, creaseless patterned piece of cloth. If you skip the well-floured step, you'll regret it. Being able to see the pattern on the cloth gives me a measure of the thinness of the dough. Distribute the apple slices evenly over the dough, making a single layer and leaving a bit of space between each piece and its neighbors. Leave a 3/4" clear border around the perimeter. Sprinkle the anise seeds over the apple pieces, then scatter the nuts evenly, and finally the raisins. 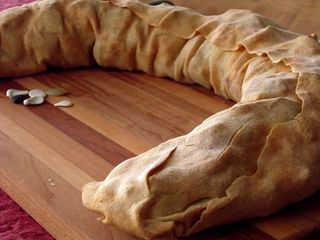 Roll up the dough, starting from one of the long sides, tightly but without tearing it. Press the flap gently and roll the two ends to seal. The cloth may be helpful for the transfer on the baking sheet. I shape my rocciata, which my husband calls "the sea cucumber" (cetriolo di mare), into a sort of horseshoe. It may be bent further, very gently, into a spiral. Bake for 40 or so minutes until golden. Let cool, slice and enjoy the way the concentric layers of ingredients play in your mouth.

This is my contribution to Think Spice… , a monthly event founded by Sunita of Sunita’s World. The November edition is titled ...Think Anise and is hosted by historical recipe discoverer extraordinaire Manuela of Baking History.

This page contains the roundup of the event.

My MIL makes a similar dessert, Simona, but I don't remember what she calls it. I loved it though, so I should try this recipe. Thanks for the delicious memories. :)

Your rocciata looks perfect. I'd really love a taste. Thanks for the recipe.

Wow! That is a masterpiece. Much prettier than a sea cucumber.

Simona, what a beautiful contribution!
I have tasted rocciata in Italy, but never made one myself. I like your recipe with a simple filling as well as the idea of including aniseed in it. It was nice to read that this is a dessert that brings back good memories for you. Umbria is a beautiful region and I hope to visit there again soon.

Not only is this a beautiful rocciata to behold, it tastes as delicious as it looks!

Hi Simona, I'm working on a translation of a Venetian cookbook and it includes the following instruction: "con decorazioni in spumiglia decorata". Does that mean with "spumiglie [pastine] colorate"? Any help would be appreciated... I'm stumped! Thanks, J

Hi Susan, I'd be interested to know what she calls it.

Thanks Paz. Unfortunately, it is a bit too delicate to travel. If one day you visit us in California, I'll make it for you.

Thanks, Manuela. Umbria is indeed a beautiful region and the food makes the trip even more enjoyable.

Thanks Christine, I am so glad you and Mr CC like it.

A Venetian cookbook is exactly what I have been wishing recently, because of a book on Venice I am reading. I will do my best to help you, Jeremy.

My Nona made this with Apples and raisins,basted it with olive while during baking. After taking it out of the oven she would drizzle honey on it and top with colorful little round sprinkles. It was absolutely delicious! Thanks for the recipe.

Hello Joanne. Thank you for sharing your memories. I am glad my post brought them back: they sound delicious. Happy Holidays!