It is a bit strange to visit the city where one grew up and find some food never tasted before, but this is exactly what happened to me during my recent visit to Perugia. I entered a store to buy some lenticchie di Castelluccio (lentils of Castelluccio) and came out with some fagiolina del Trasimeno, a legume until then unknown to me. Both Lago Trasimeno and Castelluccio are located in my home region, Umbria.

According to this page, fagiolina has been grown around Lake Trasimeno since ancient times. However, starting in the 1960's, cultivation started to decline until, in the 90's, it almost stopped. Recently, thanks to the commitment of some farmers, the University of Perugia School of Agriculture and the regional government, cultivation of fagiolina is again on the rise and people like me are getting to know and appreciate this lovely legume. 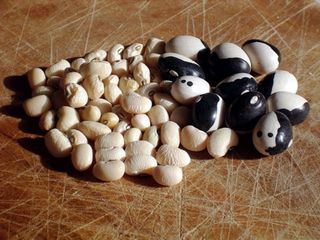 Fagiolina can be of different colors, the most common one being creamy white. The texture is soft and the flavor is delicate. The recipes are simple. I was given one at the store where I bought the fagiolina, but followed only the very last step, where it suggests to season the cooked fagiolina with salt, pepper and extra-virgin olive oil.

Before getting to that last step, I cooked half a cup of fagiolina in 1.5 cups of water in a small saucepan. There is no soaking step. Following a recipe for beans in Deborah Madison's "Vegetarian Cooking for Everyone", I added to the water half of a small onion, halved, a bay leaf, a clove of garlic, sliced, and a couple of sprigs of fresh parsley. I brought the water to a lively boil quickly and maintained it for five minutes, then covered the saucepan and lowered the heat to keep the water at a simmer. This is the way I cook beans. The recipe I was given at the store says to boil for 40 minutes, but my fagiolina was ready after 20 minutes of simmering. I let the fagiolina cool in its broth, removed the aromatics, drained and seasoned as above. This simple dish was a big hit at dinner.

This is my submission for My Legume Love Affair - Fifth Helping, the popular, legume-centered event that is the brainchild of Susan, The Well-Seasoned Cook and that I have the honor of hosting this month.

Ciao Simona. This reminds me of Mum cooking 'pasta e fagioli'. Would you, in the future, do a quick recipe for me?

I'll look forward to the roundup for the Legume Love Affair!!!

I have to give Deborah Madison's recipe a try. And isn't it amazing how different from the mass-produced beans the heirloom beans taste?

Fagiolina is such a charming name. I'd love to try them.

great post. Do they still cook the famous eel of Lake Trasimeno, so loved by Pope Martin IV (in Dante)?

Ciao Bruno. There will be a very nice recipe for pasta e fagioli in the roundup of the legume event: stay tuned!

The roundup is coming soon, Valli, thanks.

Totally, Lori Lynn. We are lucky to have a local grower of some amazing varieties.

Isn't it, Susan. It would be nice to be able to lobby some importer to get it.

I am not an eel lover, Jeremy. I am much happier with the torciglione, the almond paste dessert made in the shape of an eel. Have you ever tasted it? http://www.stradadelvinotrasimeno.it/contenuti/i-pesci-del-trasimeno.html

Thanks for including my entry. That's a lovely, personal compilation !

You are welcome, Ramki.