This month's challenge was difficult for me, because our trip to Italy, the preparation for it and the catching up after our return took up a good portion of the available time, so I found myself doing things in fretta e furia (in a rush) right before the deadline. I don't work well under pressure, so to avoid disasters, I decided to focus on the limited goal of making the recipe, pasta per la pizza (pizza dough), with the required sauce and topping, and left the acrobatics for a future date. But let's go in order.

I like to start by thanking this month's host, Rosa of Rosa's Yummy Yums for a fun challenge. You will find the recipe for the basic pizza dough and the challenge requirements here, together with Rosa's creative toppings.

Once again, I read the recipe, followed it halving the quantities (which was really easy), and things worked out fine. Instead of relying on my tried and true tomato pizza sauce topped with store-bought mozzarella (pizza margherita, name given by the pizzaiolo Raffaele Esposito in 1889 to honor Queen Margherita di Savoia, who had tasted and appreciated Esposito's output), I came up with a different sauce and produced the topping at home.

For the sauce, I used pomodorini ciliegia (cherry tomatoes) e zucchine: I sprayed a small frying pan with olive oil, warmed it up and added two cloves of garlic, peeled. When they were slightly golden, I added 4 oz. zucchini, halved or quartered, depending on the size, and sliced 1/8" thick. I stirred a few times and let cook over medium-low heat until soft, but not completely cooked. I cut in half 4 oz of cherry tomatoes and added to the zucchini. I also added a few strands of zafferano (saffron) and cooked a few more minutes, then sprinkled a few leaves of basilico (basil), slivered, and salt to taste, and turned off the heat.

For the topping, I made mozzarella following the recipe for 30-minute mozzarella from "Home Cheese Making" by Ricki Carroll. I had a couple of technical glitches, which affected the final product, but I was still able to use it successfully for its intended purpose. After flattening one portion of dough on a piece of parchment paper, I spread the sauce over it, baked for 4 minutes at 550 F, then added the mozzarella, diced, and baked for two more minutes. 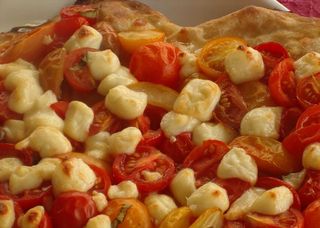 The result of my efforts was my husband's dinner one night. A second portion of dough became his breakfast the morning after. For the pizza per colazione I sort of skipped the sauce part, using half a pound of cherry tomatoes, cut in half, and lightly seasoned with salt and slivered basil leaves as above. Mozzarella from the same origin as before was the topping. The verdict favored the zucchini and tomato sauce from the previous evening (for which, I am sad to report, I have no photo). 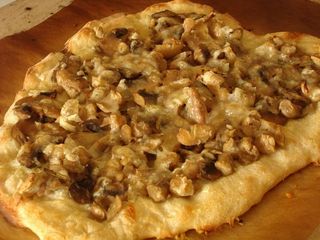 I have had a third portion of dough ready in the fridge and I can give you a preview report: it will be was baked today for lunch with a bean and mushroom stew as sauce and grated Gruyère as topping, An update on this will be posted when it becomes available. and it received top rating.

I hope you will take the time to go around and look at the gorgeous creations of my talented fellow Daring Bakers, and also at their tossing skills (that's the acrobatics I referred to at the beginning).

Your pizza looks pretty (I click the photo, so that I can view it better)
Love those cherry tomatoes, delicious.

I think your pizzas look fabulous. I bet they were delicious. Great job!

Hi Simona - though I'm not a Daring Baker, this challenge sounded like a lot of fun to me. And I look forward to seeing the creative toppings around the blogosphere. I like the idea of zucchini pizza.

You came back from a trip ... and you made your own mozzarella ... wow ... you're my hero, Simona! Bravissima!

wow you did your pizza well! fantastic, I am sure they tasted delicious!

Great pizza's Simona, but I'm so intrigued by your mozzarella making. Do you have that recipe? I would love to try making some. Maybe you could do a post on that in the future!

che belle pizze Simona! I wished I could have tasted the one with your own home-made mozzarella. But the pizza with the bean-mushroom-Gruyere topping sounds also wonderful to me, as it contains three of my favorite foods.

Thanks everybody for the nice comments: this was really a fun challenge.

The stew topping was indeed a great idea, Manuela. I will try again with other stews.

Looking forward to your post Simona, and thanks so much for the info you emailed me!!

I am intrigued that you made such great pizza & made the mozarella from scratch...a lady after my heart. Gonna take a look at that! These pizzas look gorgeous...I'm suddenly craving them at 6 in the morning LOL!!

You are more than welcome, Marie.

It is perfectly ok to crave pizza at 6 am, Deeba. Pizza makes a great breakfast.

Cherry tomatoes in the sauce, brilliant!