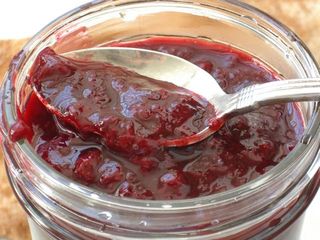 The Italian word marmellata and the English marmalade derive from the Portuguese marmelada, quince jam (from marmelo, quince, which in Italian is mela cotogna). Marmellata is generic, i.e., it is used for preserves made with all types of fruit.

My mother used to make marmellata di ciliegie (cherry jam) and marmellata di pesche (peach jam) for which I provided labor: cherry pitting in the first case, peach peeling in the second. Both tasks were preferable to bean shelling (recently mentioned), because I could occasionally divert pieces of fruit to my mouth. One day, I asked my mother to make a batch of peach jam with only 1 part of sugar to 10 parts of fruit. I loved the result, which here would be more appropriately called peach spread.

This past summer, purple plums (prugne) inspired me to make my own version of fruit spread. And to add a local twist to it, I used lavender honey (miele) I bought at the farmers' market. As mentioned in another recent post, I am not a fan of pectin, so I let the marmellata di prugne simmer for a fair amount of time. For each kilogram (a bit more than 2 lbs) of fruit, I weighed 100 g (3.5 oz.) of honey (I also made one batch using 3 oz. of agave nectar for the most recent Daring Bakers' challenge). 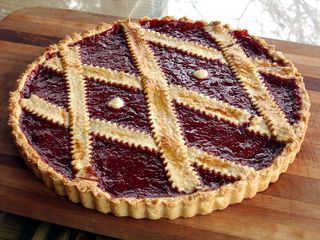 In a saucepan, I created a well with the fruit and placed the honey in the central empty space. I brought the fruit to boiling point, then let it simmer, without stirring, until it was quite soft. I used a potato masher to reduce the fruit to pulp, added 2 tablespoons of fresh lemon juice, then put the pan back on the burner for another, shorter, period of simmering. Once jarred, I stored it in the fridge. I have used my spread to make, among other things, delicious crostata di marmellata (jam tart).

2009 update: As a result of taking a conserve making class from conserve-maker extraordinaire June Taylor, I have substantially changed the process I follow to preserve fruit. I am still refining the method. The method I currently use is described in this post. To be continued.

Sounds great Simona. I just love how you decorated your tart too!

I love that you write "I'm not a fan of pectin and so I let it simmer for a long time." It's a shining example of how patience brings out the best in the foods (and the wines) we consume.

Everything sounds so good. I'd love to taste your mom's cherry jam.

Patience is the opposite of rushing. I agree with you, Jeremy, that with patience one gets a nice reward.

It was good, Paz, it was my favorite.

Mmm... I love the idea of using summer plums. I haven't done it yet myself, but I just know I would love it.

I love your plum jam/spread. The photo of the jam in the jar made me feel as if I could just lift that spoon and take a delicious mouthful. And the tart is so beautiful. I also loved the lavender honey idea. Wonderful, all the way around.

I recommend it, Susan.

Anche per me, Baol. Buona fortuna per tutto.

Thanks Lisa. I like the delicate nuance of lavender in the honey.