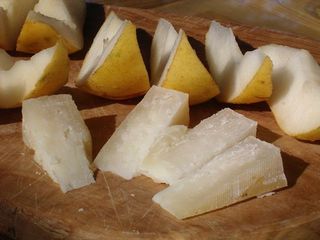 A year ago, I wrote about the combination of cheese and pears in a post called cartolina da Orvieto (postcard from Orvieto) after enjoying it in a restaurant. I recently enjoyed the heavenly pair at home and a good portion of the enjoyment was due to the fact that the cheese was of my own production.

The road from labneh to my first small wheel of cheese was not without bumps. My first attempt at mozzarella and at cottage cheese were both failures. In the first case, I was able to save the curds and used them in a gratin dish; in the second, the garbage bin was the only option. 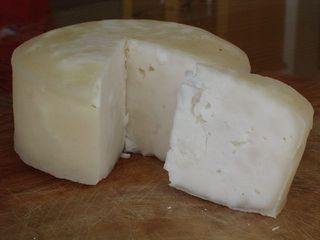 I paused a moment before investing money in a cheese press, then proceeded to purchase it. Not long afterward, out of my brand new Cheesypress press came a lovely lilliputian wheel of cheese that I left to age for a week (I could not wait any longer). What a thrill when we first tried it and it tasted good!

To make the cheese, I followed this recipe using yogurt to inoculate the milk. I used a quart of fresh (less than a day old) goat milk (latte di capra) and 3 quarts of non-fat cow milk (latte di mucca scremato). Based on the ingredients, I will dare to call it caciotta di capra, since it was fairly soft. You could taste the goat flavor as a delicate nuance. Pears from the new crop bought at the farmers' market were the right companion for my little success.

I then decided to try and age the cheese a bit longer. For my second attempt, I followed the instructions for Farmhouse Cheddar from "Home Cheese Making" by Ricki Carroll. The main differences from the printed recipe were that I halved the quantities and used 2 oz. of cultured buttermilk to inoculate the milk instead of mesophilic starter.

The aging of my second tiny wheel lasted almost a month, while we traveled to Italy. I omitted the waxing, using a coat of oil instead: this resulted in a drier than desirable cheese. Still, the formaggio was good and the organic pears that went with it were honored (though I am afraid that is not apparent from the photo). Asian pears got to meet my cheese as well and they got along well with it, i.e., we liked the combination.

The funny thing about my adventure in cheese making is that the strongest motivating factor behind it was the production of whey to make ricotta. I did get to make ricotta, using two different recipes. But that is a story for another day.

This is my contribution to Fresh Produce of the Month, an event created by Marta, An Italian in the US. The current edition, as you may have guessed, has pears as its theme. Here is the roundup of the event.

I have great admiration for those that can make cheese at home. I never tried anything beyond home made yogurt so far. The idea of tasting my own cheese is very appealing, and as soon as I have more time I will follow your recipe. My house has a very cold basement that might be the ideal place in which to let the cheese age.

WOOWW!!! Your cheese looks amazing! I'm really in awe.
I hope I can taste it soon. :)
And thanks a lot for taking part to the event!

I think we need to pair with some bright Sangiovese.

A cold basement is indeed a good place for aging cheese. And indeed, eating your own cheese is quite satisfying, Manuela.

I'll keep making it, Marta, so I am sure you'll get to taste some soon. And you are welcome.

Thanks Jeremy for the wine suggestion: your opinions on this matter are always very appreciated.