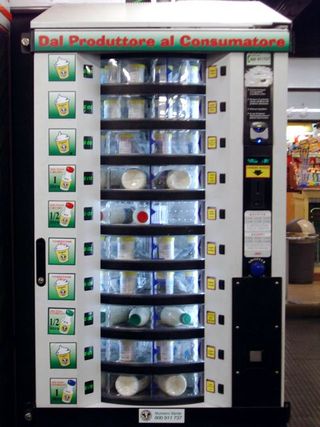 We just returned from a two-week trip to Italy, and, as you can imagine, I have a few tidbits to share, the first one being this: As I was exiting the Loreto subway station (stazione della metropolitana), a vending machine I did not remember from last year caught my attention. When I got close to it, I realized that it sells bottles of raw milk (latte crudo) and of pasteurized milk (latte pastorizzato), a liter (€1.70) or half a liter (€1.00), and small tubs of yogurt (about 200 g).

Dal produttore al consumatore (from the producer to the consumer): this machine, in fact, and the ones located in other stations [the list can be seen in the photo on the right], are replenished daily by the milk producer, the società Agricola Saletti Alessandro from Remedello (Brescia). According to a November 2007 article [no longer available online] that features a short interview with Alessandro Saletti, the machines are tele-monitored to ensure that their cold temperature is maintained, and distribution is blocked in case it is isn't. A toll-free number is provided so customers can contact the company, if necessary. The raw milk is chilled and filtered immediately after milking, then bottled and distributed daily to the machines. The pasteurized milk is heated to 70 degrees C (about 160 F), bottled and distributed every other day. On each bottle the date of milking (and bottling) is printed, together with the expiration date (data di scadenza), which is 3 days later for the raw milk, and 7 for the pasteurized one. The unsold milk is brought back to the company headquarters and fed to calves. 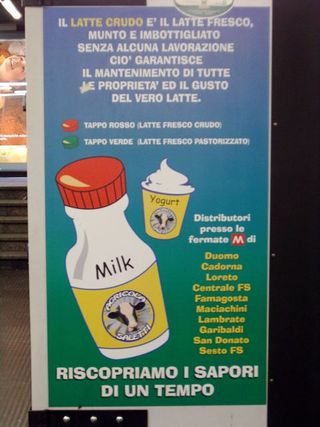 I love the idea. I must admit, though, that I did not take advantage of it, because of my kitchen-less status (I don't drink milk: I use it only as an ingredient).

Update: On December 10, 2008, the Italian Ministry of Health issued an ordinance that requires automatic dispensers of raw milk to display prominently the following sentence in red letters at least 4 cm high: product to be consumed after boiling. The ordinance also states that the party responsible for the dispenser must exclude the availability of containers for the consumption of raw milk in the same place (I not sure what this means in practice). Describing in details what happened would take quite a number of paragraphs. You can read here one side of the story and here others. The battle over raw milk now rages in Italy as well. Consumers hear conflicting, and therefore confusing, claims and that is, in my opinion, very sad.

or launch the latte fresco in metropolitana audio file [mp3].

Hope you had a wonderful time :)

Two weeks in Italy? How wonderful, Simona! I must admit, I was expecting a post on risotto or wine or pasta, but you certainly got my attention with this one. :) I'm looking forward to hearing more about your travels.

Thanks, Maryann, we had fun.

I can understand your expectations, Susan. See what I come up with in future posts.

How interesting; fresh, raw milk. In the subway!

Interesting, indeed, especially in light of the ongoing discussion about raw milk in this country. I hope to write more about this topic, Lisa.