Novel Food #5: the finale (one serving)

The summer solstice brought us a thunderstorm, a calm ocean and some amazing skies.

Thus started my portion of the roundup for the previous edition of Novel Food, the literary/culinary event Lisa of Champaign Taste and I started last year. I read it as I started to write the roundup for the current edition and thought I would add a bit of follow-up. That evening, the thunderstorms ignited wildfires in the county where I live and throughout California, kicking off a very early fire season. The fight against fire raged on for weeks. When I wrote that sentence I had no idea of what was in store.

After this reflection on the past, I will present some interesting literary works that inspired the preparation of dishes. Each contribution is, as usual, a double invitation: to read a literary work and to taste a dish inspired by it. Lisa and I had fun organizing the event. This time, I will make it a small gathering around a campfire, where people share food and literary nourishment. 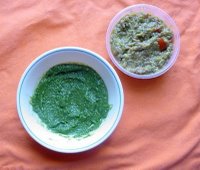 Rachel, The Crispy Cook, tells us about Diana Abu-Jaber's second novel, Crescent, " a beautifully woven tale about an Iraq-American woman who is the chef at a Lebanese restaurant in Los Angeles." She starts "a romance with a haunted Iraqi professor of Arab literature."

The novel inspired Rachel to look up Arab recipes and, among them, she chose to share with us a Yemenite Eggplant Salad. 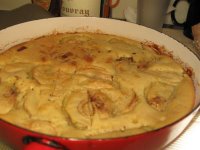 The book caused the preparation of not one, but two dishes: a fish stew and an apple-and-dried-apricot clafoutis (pictured left). 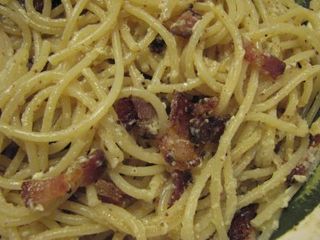 Lauren of I'll Eat You recently picked up a copy of Ruth Reichl's Garlic and Sapphires, her memoir of her early days as a critic at the New York Times. The book "includes some of her best reviews from over the years" and also recipes.

Overcoming her hesitation about egg yolk, Lauren prepared Spaghetti Carbonara, described by Reichl as "bacon and eggs, but on pasta instead of toast." 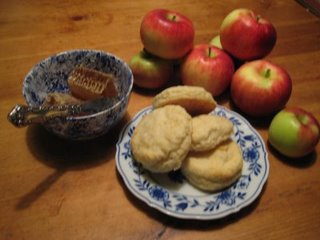 Sara of Heaven on Earth tells us about a feast offered to Natasha, the heroin of Tolstoy's War and Peace, which includes "mushrooms, biscuits of rye flour made with buttermilk, honey in the comb, foaming mead made from honey, apples, nuts raw and nuts baked, and nuts preserved in honey... preserves made with honey and with sugar, and ham and a chicken that had just been roasted."

Sara offers us buttermilk biscuits, apples and honey in a comb. 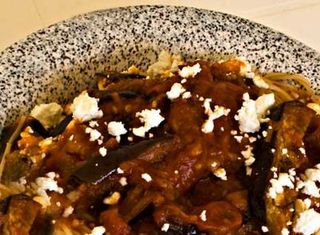 Laurie of Mediterranean Cooking in Alaska was inspired by Andrea Camilleri's Montalbano novels: "One week later, thoroughly captivated by the cantankerous, world-weary, enigmatic inspector, I finished the last of the six books."

In The Snack Thief, Montalbano is invited to a lunch that starts with Pasta alla Norma (Spaghetti with Eggplant and Tomato Sauce): how can he refuse such an invitation? 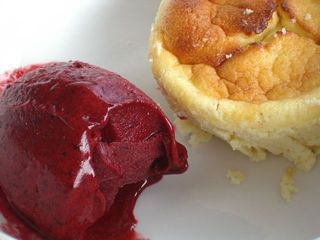 The recent release of the movie Brideshead Revisited made me pick up again the novel by Evelyn Waugh. Images from the 1981 TV mini-series, watched not too long ago, were very vivid in my mind, preventing my imagination from running unfettered.

From a meal ordered at a French restaurant by the protagonist and narrator, I was inspired to make a soufflé di ricotta al limone (lemony ricotta soufflé) served with homemade sorbetto alle more (blackberry sorbet). 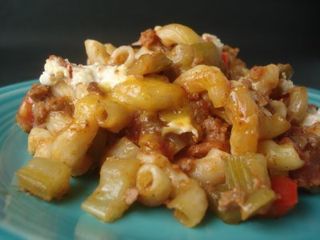 If you started reading the roundup of the fifth edition of Novel Food here, make sure you navigate to Lisa's blog, where you will find another set of appetizing literary and culinary works. They include Lisa's own contribution inspired by the novel Bridge of Sighs by Richard Russo: Hamburger Casserole (a.k.a. Beef and Macaroni Bake).

The title of the novel makes me think of beloved Venice. The story, however, is set in a small town, Thomaston. Lisa found the novel "engrossing, poignant, rich, and delicious." The dish she was inspired to make is certainly all of that and also beautiful to look at.

I hope you enjoyed our literary/culinary party, the company and the suggestions for reading and for cooking. Our event will be back next season: stay tuned for the announcement that will be published in about two months'. See you then.

Posted by Simona Carini on September 21, 2008 in Novel Food | Permalink

Nice roundup. Didn't we get some wonderful guests (and food) around this campfire? It's great.

I think you guys overlooked my entry: http://www.columbusfoodie.com/2008/09/18/fried-green-tomatoes/

Great dishes and literary works. Thanks for hosting!

Wonderful entries - a literary feast upon which to, well, feast!

Shame to have missed the event, but I'd no idea this was the final chapter! Thanks for hosting it - both yourself and Lisa have made it a blogging highlight of the last 12 months.

As a professional literature nerd, I love this event. From the very first one on, I have my recipes but I always miss it. I will put it on my calendar for the 6th one.

We did, Lisa, indeed: thanks to all of them for their contribution.

Sorry for the email mishap, Becke: your lovely post has been added to Lisa's portion of the roundup.

You are welcome, Manuela: it is always such fun!

Hi Lucy. We missed you, and let me clarify that this was by no means the final chapter: Novel Food will be back next season.

I like how you defined yourself, Burcu. Looking forward to you joining the next edition.

Mannaggia me lo sono perso! When I saw your notice on Novel Food on your blog in August I thought I wanted to do it, but I had hard couple weeks and no chance. I wanted to prepare "Gli arancini di Montalbano"... Ok next season then!

Thank you, Simona, for the great round-up of the usual goodies and good reads.

I just got snowed under this month!

Plenty of time to read and cook.

Cinzia, I hope you'll participate next time. I am sure a lot of people would love to know about the arancini.

You are welcome, Susan.

Wonderful roundup of the entries. Everything looks and sounds so good. I hope to be able to participate in the next event.

Thanks Paz. I hope so too.