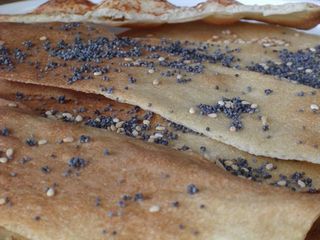 In Italian, we use the English word cracker. The singular and plural forms are identical1.

Another month without tragic tales of disaster to tell: does it mean that I am getting better at handling the challenges? It it probably too early to tell.

I liked this month's challenge as it asked us to make something I had been wanting to try for a while, i.e., crackers. And I like that the recipe was light, more in the style of a flatbreads than of crackers I am familiar with. Once again, I read the recipe, followed it, and things worked out fine. The result of my efforts was highly appreciated. It was appreciated so much that a crunching noise became the soundtrack of the house. A second batch produced the same result. And the third followed suit. Hence, if a constant crunching does not irritate you, I recommend you give this recipe a try.

First of all, many thanks to the this month's hosts, Natalie of Gluten A Go Go and Shel of Musings From the Fishbowl. They left us free to top the crackers however we liked. And they asked us to create an accompaniment (dip, spread, relish or salsa) for them that was vegan and gluten free (vegano e senza glutine). 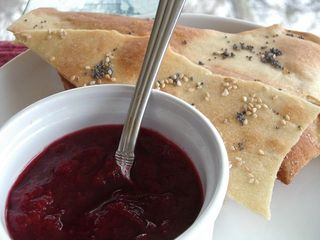 To go with the Lavash crackers, I made a batch of plum spread using agave nectar instead of honey (which I have been using to make my fruit spread local, but is not vegan). I don't call it plum jam, because the proportion of sweetener to fruit I use is about 1 to 10. For some reason, I don't feel comfortable about using pectin, so I just let my fruit spread simmer longer. The beautiful color comes from deep purple prugne I got at our farmers' market.

I hope you will take the time to go around and look at the gorgeous creations of my talented fellow Daring Bakers.

1However, on Italian cracker packages one can often find crackers printed.

Plum spread sounds wonderful for your beautiful crackers. I also don't like to use pectin when I am making jams or jellies.

I've never made crackers Simona. Something I will consider now. I really like your eclectic mix of toppings and that purple plum spread looks divine!

Brava! I love the spread of prugne that you made. It's one of my very favourite fruits!

I love the sound of your mixed spice topping for the crackers. Very eclectic!

I can't tell you how impressed I am that you made crackers, Simona. I've been thinking of trying my hand at them for some time. They look perfect, and I really love the toppings. Matcha salt is a new one for me.

Great job! Looks delicious. Glad there were no mishaps.

Thanks, Elra. I am glad you share my distrust for pectin.

I recommend this recipe, Lori Lynn.

Ciao Ivonne. I hope you got to eat prugne when you were in Italy last month.

Hi Susan. The were easier than I thought, really. I got matcha salt where I get my tea: http://www.dragonwater.com/product_detail.tf/923_matcha_salt.html

Thanks Paz, me too!

Does one say "il cracker" or "lo cracker"? The plural, I presume, is "i cracker."
==============
Detectives Beyond Borders
"Because Murder Is More Fun Away From Home"
http://www.detectivesbeyondborders.blogspot.com/

Hi Peter. We say il cracker and, yes, for the plural, i cracker.

I have a prugna tree but the only ones who eat them are the raccoons!

It's a bit sad that you cannot harvest any plums from your tree. Raccoons tend to be greedy.

How did I miss this post? People, there was joyful crunching around our house too, due to the crackers that Simona left for us to enjoy.

So glad you liked them, Christine.