I warned you at the end of my previous post that you would get another episode related to pollo arrosto (roast chicken) and here it is. Bones with some meat attached and the neck went into a pot to make a light stock and, ultimately, a soup (minestra).

Back to the chicken. In Julia Child's "Julia's Kitchen Wisdom," I found a nice recipe for making Light Chicken Stock, just what I needed. I covered the chicken bones and trimmings with water, then added a quarter of a big onion, chopped, a carrot, sliced, and a celery rib, sliced as well. I also tied together a few sprigs of parsley, a couple of sprigs of thyme and a bay leaf to make a herb bouquet, which I wrapped in cheesecloth before plunging it into the water. I brought the water to a simmer, skimmed a bit of foam from the surface, then covered the pot loosely and let it simmer for an hour and a half. After the light stock had cooled, I strained it, then put it in the fridge and the day after I degreased it (there was not much fat to remove, actually). 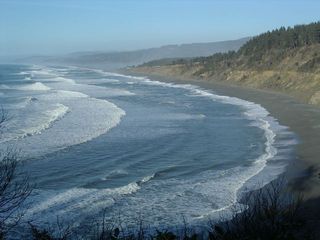 Making hot soup in the summer may seem strange, but our evenings can be quite chilly (and our days too), because of the coastal fog. Last night, after a bike ride to nearby Patrick's Point Park, a walk on Agate Beach (pictured above on a sunny day) and the ride back home, a soup made a perfect dinner. I prepared what Julia Child, on the same page as the recipe for Light Chicken Stock, calls Soupe du Jour (minestra del giorno):

Meaning add anything else you have on hand, such as cauliflower, broccoli, green peas, spinach, cooked or raw. This is how you may come up with some of your own marvelous ideas and and secret "house recipes."

The Soupe du Jour is actually given as a variation of the Potato and Leek Soup described on the previous page, but that's just a minor detail. I went out to my little vegetable garden and harvested some kale leaves, the second zucchina of the season (as in the second individual, not the second batch), a few broccoli florets and a couple of zucchini blossoms. I must admit I am not a very good gardener: considering how neglected it is, my little patch is doing pretty well, producing mostly kale, some Swiss chard and the occasional zucchina.

Back to the kitchen, I washed and chopped the vegetables. I brought some of the brodo (I set aside three cups for a future endeavor) to boiling temperature, then added the vegetables, except for the zucchini blossoms. When the vegetables were almost cooked, I added the zucchini blossoms, sliced lengthwise, and two cups of small-size pasta (pastina) already cooked (leftover from a previous meal) and cooked for another couple of minutes. I served the soup sprinkled with crumbled fresh goat cheese and some home-made olive bread. It was restorative.

This is my contribution to the Third Annual Julia Child Birthday Celebration, a lovely tribute organized by Lisa of Champaign Taste. Julia Child was born on August 15, 1912. Here is the roundup oft the event.

This was actually the second Julia Child's recipe I made this year. The first was her French bread (pane francese) from volume two of "Mastering the Art of French Cooking," which was the Daring Bakers' February challenge.

I think I may have soup tonight. I was able to have the roasted chicken and it was DELICIOUS! Oh, so good and simple. Now I can make soup from the leftovers. Thanks for the recipe that keeps going. ;-)

Briciole, I love your "about": "a peripatetic food story-teller." The act of food (and wine) writing is really a peripety, isn't it? I always enjoy your blog... Jeremy

I have never put zucchini blossom in a soup, just slice lengthwise and cook for a couple minutes, that's it? Sounds like a lovely garnish.

I am so glad you had the roast chicken and liked it, Paz. On to soup now.

Thanks, Jeremy, for your kind words.

Simona, this is wonderful. Thank you so much for taking part again. I love the idea of you going out to your kitchen garden to pick the fresh ingredients. And I remember your French bread. Mmm, heavenly.

The photo of the coastline is much appreciated, too. Stunning!

Simona, You make me want to whip up a batch right now! Oh, if only I had that coastline to gaze at, I would never want to leave!

Your blog is great. It is such a great reference.

Just what I need in the coldest winter we've had in Sydney.. hot chicken broth.. and I will shortly enjoy it on a beautiful pure white beach in Coffs Harbour.. Northern NSW..
Thanks Simona... Bruno

I forgot to mention that as a kid, we always had 'brodo' as the 1st dish. Since Mamma passed away, I got lazy.. but now I intend to have it as often as possible.. Thanks again Simona... Bruno

I have that book - and I love it. Can't you just hear her voice when you read it!
We're having soup weather here, too. Maybe I should get a chicken....

You are welcome, Lisa: it's my pleasure.

Thanks Poonam and welcome.

Hi Marie. I feel the same way, so we don't travel much.

Thanks, Christine. I agree.

Hang in there, Bruno, spring is on the way. I looked at some photos of Coffs Harbour: nice. I hope you are having a great time there.

Indeed, Katie, her voice comes out of the pages.