It's that time of the month, when I tell the story of the disasters small and big that occurred in my kitchen during various attempts at fulfilling the Daring Bakers' challenge. There is always hope that next months things will go smoothly. In the meantime, let me tell you a bit about the June challenge, which was not, despite my doomsday introduction, an unmitigated disaster.

First things first. Many thanks to Kelly of Sass & Veracity and Ben of What’s Cookin’? for choosing a great recipe and one that, unbeknown to them, I needed to know about. You can read the recipe here or here. You can easily halve the recipe, which is what I did. Remember that dimensions are affected by the halving process. And also that not all fillings are created equal. But let's go in order.

For my first treccia, I chose a crema (pastry cream) filling. However, instead of using lemon peel to flavor the crema, I used vaniglia (vanilla). The recipe for the Danish dough calls for half a vanilla bean. Since I made half the recipe, I split the half bean lengthwise, and used one half for the dough. I then had the other half ready to be used to flavor the filling. I infused the bean in the milk heated to almost boiling point, then scraped the seeds before removing the bean from the milk. Remember to save the used vanilla bean pieces: they can be placed in a jar of granulated or powdered sugar to make vanilla sugar. Once ready, the crema needed to be placed in a bath of cold water. Except that I got distracted and opened the faucet into pan with the crema. As you can imagine, I wasn't exactly pleased with myself. Batch number two of crema was completed without major mishaps.

I refrigerated the Danish dough overnight and the morning after the thought that things weren't going exactly as expected presented itself. The dough had not changed size at all. And it persisted in not changing size for several hours after I had shaped and filled it into a braid. Basically, the active dry yeast had not done its job. I was a bit worried when I put it in the cold milk the day before, since I am used to warming up the liquid into which I put yeast when I make bread. Having gone to all the trouble, I decided to bake it anyway and the result, though edible, was not what should have been.

For my second treccia, I used the instant yeast that I use to make bread and warmed up the milk slightly. Not sure which of the two changes made the difference, but when I retrieved my second Danish dough from the fridge, it had clearly risen overnight. I did not feel like making yet another batch of crema, so I sliced fresh fragole (strawberries) and added a tablespoon of sugar to them. By the time I had prepared the treccia for filling, it became clear that the strawberries would bleed during the proofing period. So, when the treccia went into the oven, there was a pool of blood, that is, strawberry juice, around it. 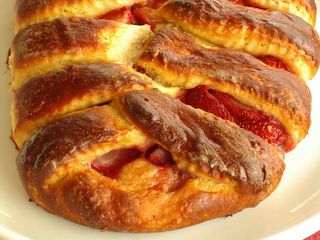 I kept going, because, you see, this was on Sunday morning and I had no time to do a third treccia before the deadline for posting. And, of course, the treccia came apart at the seams during baking, so what came out of the oven was not pretty. Fortunately, it was good, and the guests at the table, focus on the flavor of their breakfast, were not troubled by its appearance. I had cut four slices before I was able to grab the camera and take a photo, which should be considered simply a proof of the fact that I fulfilled the challenge.

A third treccia will be made shortly. It will have crema as filling and it will be prettier than its predecessor. Hopefully I will also have a better photo to show you that I can do better than just go from one disaster to its successor. In the meantime, see what a Danish braid can look like in the hands of skillful people by perusing the gorgeous creations of my talented fellow Daring Bakers.

Simona what you show me here looks very pretty. I have to smile when you talk about the strawberries bleeding - they do tend to do that! The have some of the highest % of water in them of any fruit. But they are so lovely.
Now I'm wanting to do a savory braid with this dough.

Disasters are what make us appreciate the successes even more. And for what it's worth, I think your strawberry braid looks quite delicious!

I'd say you did a fantastic job!

Three treccia? *That* is Daring Baker dedication. Great job... even if the first was too stubborn to rise and the strawberries bled through the second one. I bet they *tasted* great.

Ciao Simona, the treccia in the picture to me seems just perfect. Trying crema as a filling sounds great--I'd like to try it.

It looks great to me Simona!

Looks wonderful! You know, I didn't pay attention to a change in size but my braid did get "softer."

You are so dedicated to do this multiple times! I have to say that your braid photo looks great despite your frustrations. So good job!!

This is new to me, Simona, and your photo looks beautiful. You truly deserve kudos on your efforts.

I am impressed that you are making it three times. I am sure that your third one will be a success. Thank you for baking with us :)

I think your braid is fine. I'm especially interested to know what you used to cut your strips with - it looks almost ruffled...

Looks delicious Simona. The problem with your blog is that it makes me soooooo
hungry. It's all OK for all the others visiting your blog who are chefs and can just dish it up at any time. If I were in America I would set up a once a month dinner for all of you to attend and cook for me. Bruno

I'm glad you stuck with it, and that it was worth it!

I think that your first yeast would have risen eventually - it was just cold, maybe?

Thanks everybody for the kind words about my bleeding braid. To answer a couple of questions:
- I used a scalloped pastry cutter for the flaps and I think the result looks nice
- I am definitely in a cold environment, but I made sure the first braid was in a warm one and the result was that the butter was surfacing.

Bruno, a friend of mine just said something on the same line to me. If you decide to cross the ocean and visit, we'll make sure to organize something special.