I am aware that Easter (Pasqua) is the traditional time for pastiera. Last March, I had a vague desire to try and make it, but then decided to put it off until next year. However, Marta, An Italian in the US, forced my hand, so to speak, by bringing me as gift some "secret ingredients" from Italy. I have read that nowadays pastiera is available throughout the year, so I guess it is fine if I talk about it now. 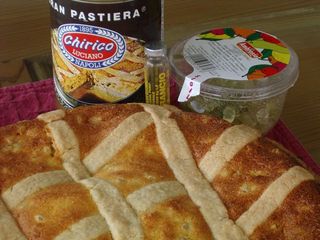 Marta gave me a can of ready-to-use grano cotto (cooked wheat kernels), a vial of acqua di fiori d'arancio (orange flower water) and some cedro candito (candied citron). What I was left with was the task of finding fresh ricotta, making the crust and assembling the whole thing. The can of grano cotto had a recipe printed on it similar to this one, available also in English here. Several momentous decisions informed my next steps. First of all, although I bought 1.5 lbs of fresh cow-milk ricotta, I decided to halve the recipe to make a more manageable pastiera, use the 9" pie pan1 I already had, and give me a second chance, if anything went wrong the first time.

The other decisions pertain the changes to the recipe. For the pasta frolla, (or pastafrolla, sweet shortcrust pastry) I used one of Artusi's recipes, which is a classic. It was beautifully presented recently by Baking History in this post. The change I made to the original recipe in this occasion is the use of 1 cup of regular flour and half a cup of whole-wheat pastry flour, then more regular flour to knead the dough (a quarter cup or so). I always use extra-large or large eggs. The changes I made to the recipe for pastiera quoted before pertain a bit more than just halving it.

Update: If you don't have canned grano cotto, please see the recipe in a later post, where I explain how to prepare your own.

In a small pan, I warmed up grano cotto, milk and grated lemon zest and cooked for 10 minutes, stirring often. In a small mixing bowl I beat the egg whites until soft peaks formed. In a bigger mixing bowl, I beat egg yolks and sugar, then added ricotta and beat a bit longer. I switched to a spatula and folded in grano cotto2, candied citron, vanilla and orange flower water. Finally, I folded in the egg whites.

After lining the pie pan with the sweet shortcrust pastry, I poured the filling and decorated its surface with a lattice of pastry strips. I had a good amount of leftover (partly because I don't like the crust too thick, partly because I used a pie pan), so I made something with it. Hold on, not here, the story will be is told in another post. I baked the pastiera for one hour in the oven preheated to 350 F, until the surface was golden (I recommend checking your pastiera after 40 minutes, and adjust the baking time as needed). I then turned off the oven and let the pastiera rest for about half an hour in it before taking it out. I let the pastiera cool and then sprinkled the surface with a tablespoon of zucchero vanigliato (vanilla-flavored powdered sugar), which I make by leaving vanilla beans leftover from making ice cream into the powdered sugar jar. 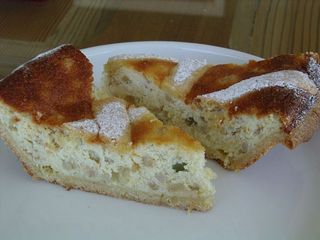 I could not wait, so we had a slice the evening of the day I baked it. However, a longer resting period allows the flavors to blend, so make it at least the day before you would like to serve it, a recommendation I followed in the case of my second pastiera, whose story, i.e., recipe, will be told in a soon-to-be published post.

Many thanks to Marta for the wonderful surprise, which has nudged me to make a dessert whose first bite, many years ago, I still remember as a gustatory dream.

I am now supposed to send a secret ingredient and a recipe for it to other bloggers. I will do so and will update the post when it happens.

1 After making pastiera col cioccolato, I bought a 9" round cake pan and henceforth used it.
2 In reading again the recipe, I realized I have left out the grano cotto from the list of ingredients added to the beaten egg yolks and ricotta mixture. Apologies to the early readers.

This turned out really well, it looks delicious! How nice to have such a thoughtful friend~

Simona,
You did a lovely job on what we call "The Easter Pie".You can see mine on my recipe page. It's a bit of work but very satisfying, yes? That was nice of Marta to send you some of the ingredients. I never saw the wheat in a can. That's interesting!

My mother's aunt do a wonderful "pastiera", it's a very good pie!

Thanks Jann. Indeed, I consider myself quite lucky.

Thanks Maryann for reminding me about your post. My memory needed a nudge. I do remember it now.

Ciao Baol. I wonder what your great-aunt would think of my version.

Ohhhhhh che bella!!!!
I'm so happy you tried it. And now I'm really curious to taste the one we prepared together with the other batch of ingredients!!! :)

Ohhhhhh che bella!!!!
I'm so happy you tried it. And now I'm really curious to taste the one we prepared together with the other batch of ingredients!!! :)