Novel Food #4: the finale (one serving)

The summer solstice brought us a thunderstorm, a calm ocean and some amazing skies. Another season is starting. Novel Food, the literary/culinary event Lisa of Champaign Taste and I started last year, is here again, presenting some interesting literary works that inspired the preparation of dishes. Each contribution is a double invitation: to read a literary work and to taste a dish inspired by it. As usual, Lisa and I had fun organizing the event. This time, it is going to be a cozy getting together, a little tea party where we talk literature and food. I cannot think of a better way to spend some summer/winter time. And now, without delay, here is one set of morsels: Enjoy them! 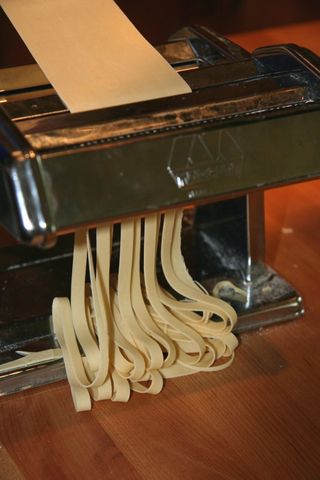 The first invitation comes from Ruhama of rumahama. The book that inspired her is, aptly enough, Invitation to the Game by Monica Hughes.

The story is set in the year 2154. There are some problems in the future described in the book: robots have replaced humans and, as a result, humans are unemployed. In this sad situation there is still room for culinary creativity, though: Benta brings to her friend Lisse eggs and cream and with those ingredients, they make fresh egg pasta with cream sauce. Ruhama made some beautiful fresh egg pasta, and then prepared Fettuccine Alfredo, a comforting dish. 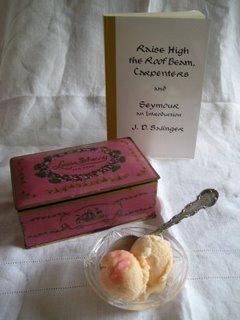 Sara of Heaven on Earth introduces us to Seymour an Introduction by J.D. Salinger.

The excerpt Sara uses to give us a sense of the story is an appetizing read: "At about nine, I had the very pleasant notion that I was the Fastest Boy Runner in the World." The run has to do with getting some Louis Sherry ice cream. Sara tells us that "Louis Sherry was a high end confectioner. Ice cream, chocolate and jam." Not knowing what flavor(s) is involved in the story, Sara chooses to make Peppermint ice cream, using candy canes from the Christmas tree, a refreshing dish (especially after a fast run). 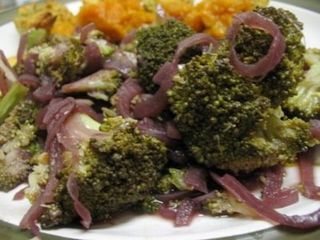 A doctor delivers his own twins, a healthy boy and a Down girl. He asks his nurse to take the baby girl to an institution, but she raises the child as her own. The real mother's grief for the loss affects the family relationships. Johanna tells us about a meal the wife prepares for her husband that ends up being abandoned. The episode inspires Johanna to prepare Sicilian drowned broccoli (broccoli affogati), a consoling dish. 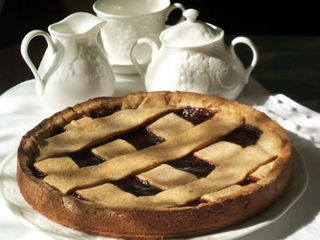 Manuela of Baking History tells us about the novel The Inn at Lake Devine by Elinor Lipman.

The protagonist of the story embarks in a personal crusade against bigotry and social injustice and finds love in the process. She also finds her call to become a chef. A reference to Linzertorte prompted the recreation, based on the original recipe, of the dessert, for our enjoyment, an elegant dish. 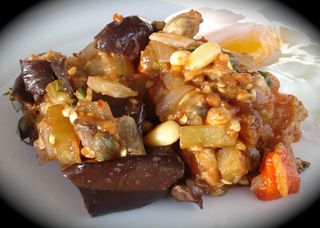 I went back to Andrea Camilleri and his inspector Montalbano, with The Paper Moon.

Montalbano is disturbed by thoughts about his death, and by two women involved in a murder. Everybody has dark secrets to hide. One evening, on coming home, he finds that his faithful Adelina has prepared for him a bowl of Caponata di melanzane, a traditional Sicilian dish that marries sweet and sour flavors in a sumptuous composition, a Mediterranean dish. 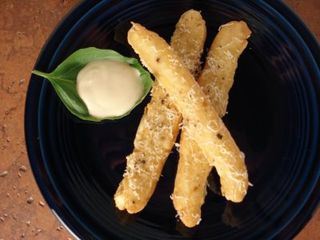 If you started the party for the fourth edition of Novel Food here, make sure you travel to Lisa's blog, where another serving of morsels is waiting for you (make sure to refill your tea cup, if it is empty). They include Lisa's own contribution, where she introduces us to Alice Waters and Chez Panisse by Thomas McNamee.

What better dish to go with the book than Panisses?

I hope you enjoyed our literary/culinary trip with its suggestions for reading and for cooking. Our event will be back next season: stay tuned for the announcement that will be published in about two months'. We hope to see you then.

Nice round-up, partner! I liked the variety of novels/stories/poems and so forth that we had this time. Once again, I appreciate doing the event with you and everyone who took part. I love finding out about books I wasn't aware of before and being reminded of ones I want to reread. And, of course, there's the food...!

Thanks for the round up simona - great event that brings out some interesting inspiration for cooking - I enjoyed the challenge!

Great roundup as always. So many beautiful dishes and literary works to enjoy. Thanks for hosting!

Hooray! A great group of posts giving me more books and recipes to pursue. :)

Thanks Johanna, I am glad you enjoyed participating.

I agree, Manuela. It is a pleasure to host this event.

Indeed, Ruhama, some homework for the summer, I guess.

Wonderful lineup. I'm sorry I couldn't participate this time around. Next time.

What a nice roundup and event, as always. :) - I'm sorry I'm not reading enough novels in this period of my life to ever find a decent inspiration!!!
I LOVE Camilleri, though, and 'caponatina'.. mmm... one of my favorite dishes on earth!!!

Hi Paz. Don't worry, there will be a next time.

Thanks Marta. You can use other published works, not only novels. In any case, yes, Camilleri is very good. I'll make caponata when we get together next.

The last couple of novels I have read didn't really have any memorable food scenes. I hope some in the future do though. This is a great selection.

Ah, another delicious round-up of words with wonderful recipes. Sorry I missed it, but I will be the first in queue for the fall volume.

Thanks Susan. I am glad you enjoyed the roundup.