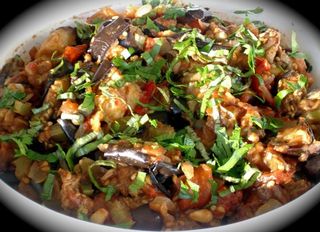 Back in the house, he opened the refrigerator. Adelina must have come down with an acute form of vegetarianism. Caponata and a sublime pasticcio of artichokes and spinach. He set the table on the veranda and wolfed down the caponata as the pasticcio was heating up. Then he reveled in the pasticcio.

As you may have already surmised, it is Salvo Montalbano who has just wolfed down a bowl of caponata (caponatina literally means small caponata), while sitting at the table on his veranda, facing the sea, and listening to its soothing sound. A while ago, Peter of Detectives Beyond Borders mentioned to me the quote above from La luna di carta (The Paper Moon) by Andrea Camilleri and I promised him I would try and make caponata, a traditional Sicilian dish, to celebrate the arrival of summer. And that is what I did, after reading again the novel for good measure and renewed pleasure.

La luna di carta is the story of a murder and it involves two women who, in different ways, attract Montalbano. One of them scores points with Montalbano by sharing with him the need to eat in silence. It is also the story of a Montalbano disturbed by thoughts about his death, a story of dark passions and drug dealing, a satisfying read.

According to the glossary of La Cucina Italiana, caponata "features cubed eggplants, celery, and onions - each one fried separately in a generous amount of olive oil - flavored with tomatoes, raisins, pine nuts, olives, a sprinkling of vinegar, and a touch of sugar for a characteristically sweet-and-sour flavor... Caponata is usually enjoyed as an antipasto in its native Sicily, but it also makes a lovely side dish and is quite delicious spooned onto crisp bread for crostini.

Caponata marries many flavors in an agrodolce (literally, sour-sweet) medley. I love melanzane, so I don't need special prodding to cook them, but I don't like them fried, so I bake them. Being a traditional and popular dish means that there are countless recipes for caponata, with ingredients (like bittersweet chocolate) added and subtracted depending on location. There are also different theories about the origin, evolution, and the etymology of its name. Since I don't have a family recipe to rely on, I felt free to experiment with whatever blueprint I chose. A year ago I read an appealing recipe on Saveur. I made several changes to both its list of ingredients and its procedure, based on my taste and various idiosyncracies. The result of my first attempt was really good, though not quite authentic. I think Sicilians, Montalbano et al., would not agree with my choice of not frying the eggplant, and you are welcome to side with them. Here is the list of the ingredients I used:

Note that, with respect to the Saveur recipe, I halved the quantity of vinegar and omitted the sugar. This is because, for my first try, I wanted to keep the sour and sweet flavors a bit toned down. I have a memory of a caponata eaten eons ago that was a bit too vinegary even for the vinegar lover that I am. I also used a berry vinegar instead of a red wine one, for no reason other than because I like it. I love anchovies and make generous use of them. You may decide to be more guarded.

Sprinkle the eggplant slices with salt and let them stand for an hour, then remove the excess salt and pat them dry. Distribute on a baking sheet and bake at 425 F for 15 minutes, then flip and bake for the same amount of time. When cool, cube (1/2") the eggplant.

Generously spray with olive oil a pan and add the onion and anchovies. Cook for 5 minutes, then add the celery and cook on low heat for 10 minutes. If the pan becomes dry, add a bit of the juice from the chopped tomatoes. Add tomatoes and turn up the heat to medium-low. Cook 5 minutes, then add the vinegar and tomato paste. Mix to dissolve the paste. Cook 3-4 minutes. Add cooked eggplant, raisins, pine nuts, capers, olives, roasted pepper. Cook until everything is hot. Add salt and pepper to taste. Transfer to a plate and let cool slightly. Sprinkle basil and parsley on the top. Let the caponata cool before serving it. Better yet, store the caponata for a day in the fridge, take it out in advance and serve at room temperature. I made the caponata before dinner and we ate it lukewarm. I was very happy about the result. The day after, it was definitely better. The flavors of the different ingredients come together in a sumptuous chorus, where each voice is distinguishable, but also works in harmony with the others. Caponata has a rich flavor. It reminds me of Sicily: its colors, its many architectural styles, its composite historical heritage.

This is my contribution to the fourth edition of Novel Food, a seasonal literary/culinary event that Lisa of Champaign Taste and I concocted a year ago and have been co-hosting ever since.

Great post Simona. I enlarged your caponata photo, boy does that ever look tasty!

The many medleys of vegetables in the Mediterranean have a wonderous way of melding their flavours together, the sum being greater than each ingredient.

Delicious-looking! Glad you were able to try this. The book as always sounds good. I like the part about him attracted to the two women. So, does he pick anyone?

I've sometimes heard of caponata referred to as "eggplant caviar." I would agree. It is a luxurious delicacy. What a crush of flavors, Simona. Just reading through the ingredients is perking up my jaded appetite.

Such a delicious take on caponata.

I love that Adelina comes down with an acute case of vegetarianism! I must get my hands on one of Montalbano's adventures - they do sound wonderful.

Thanks Lori Lynn, it is tasty indeed.

I totally agree with your assessment, Peter.

Hi Paz. The short answer is no, he remains faithful to his eternal fiancée.

Thanks Susan. I like your expression "crush of flavors."

Hi Lucy. In another chapter of the same book, Montalbano receives a package of smoked salmon and other Nordic delicacies and makes up for the preceding vegetarian phase.

That's a beautiful concoction you have there! Interesting that you baked the eggplant; must less oil that way. Love the Kalamatas and the raisins in there. What a wonderful way to celebrate The Paper Moon, a book that I, too, enjoyed tremendously. Good going, partner!

I love your technique for caponata-roasty flavors are always a plus.

Oh, lovely. I'm reminded of a recipe for sardine pasta I saw with similar flavors - I'll have to keep this in mind when the eggplants really get going.

Thanks Lisa. Definitely less oily. I do the same to make parmigiana di melanzane.

Hi Adele. Indeed, pasta con le sarde has some of the same ingredients.

AH, I have made so many recipes from his books. And, I was just thinking about doing his book for Novel Foods, but I find that you have done them.

It would be interesting to have another take on a Montalbano novel: we love them so much!