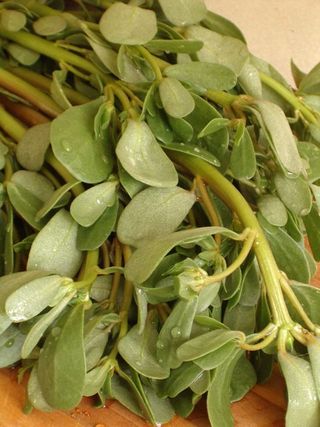 From a December 1992 article in Agricultural Research:

It's known as purslane - a plant that is a troublesome weed in many U.S. crops, especially vegetables. But recent research findings confirm that purslane is also a rich source of fatty acids, vitamin E, and other key nutrients - making it a prime candidate as a new vegetable crop. There are about 200 species of purslane, the common name for a group of plants known as Portulaca. Scientists have focused on one annual species, P. oleracea, found around the world and in all 50 states. It is known for its persistence - it grows even in poor-quality soils with little water and resists disease...
P. oleracea contains more of one omega-3 fatty acid - called alpha-linolenic acid - than any other green leafy vegetable yet studied.

I must admit I was purslane-illiterate until a few weeks ago, when, while roaming around our farmers' market, a bunch of purslane attracted my attention. My friend Christine of Christine Cooks, with whom I was sharing the shopping adventure, invited me to taste a leaf: it was succulent, crunchy, with a slightly tart flavor. I was told I could use it in salads or cook it lightly, like spinach. I was convinced, and proceeded to place the bunch of purslane in my basket.

Had my memory functioned a bit better, I would have remembered reading about purslane salad with yogurt on Almost Turkish Recipe. Soon after my purchase, I made a hybrid soup/stew with hulled barley and decided, on the spur of the moment, to add to it the tender sprigs of the bunch of purslane during the last five minutes of cooking. Later on, I read that "Purslane’s high level of pectin thickens soups and stews," a retroactive justification of my impulsive action. I loved the result and the flavor of purslane, so much so that I have been buying a bunch at every visit to the market. I have also sautéed, together with baby spinach and boiled Swiss chard, and again the result was delicious. 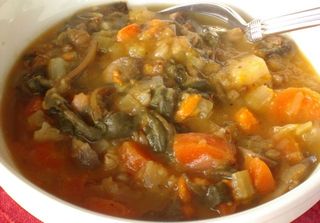 In summary, purslane makes a nice addition to salads, soups and sautés. This is called versatility. Add to the list of good qualities the fact that it is tasty, either raw or lightly cooked, and that it contains precious nutrients, and the result is a really nice resume for a vegetable that, until not long ago, was considered a weed (erbaccia).

The Latin word portulaca is conserved in the scientific name of the plant. According to my Italian dictionary, the word had the variant porcillaca, ancestor of porcellana. As noted at the beginning of the post, the same word in Italian indicates also porcelain, china (for example, un vaso di porcellana, a china vase): in this meaning, the word porcellana has a different etymology. Cowrie is also porcellana in Italian.

This is my entry for Weekend Herb Blogging, a food blogging event started over two years ago by Kalyn of Kalyn's Kitchen and hosted this week by Gay, A Scientist in the Kitchen.

Posted by Simona Carini on May 15, 2008 in Vegetable, Weekend Herb Blogging | Permalink

I too discovered Purslane while in Greece last year and upon my return...discovered the stuff growing amongst our grass and it was just as good tasting.

It grows all over the pavers in our front garden and I'm amazed at how quickly it becomes huge!

Wonderful flavour. It's used by Lebanese cooks, too, with sumac and lemon juice.

I pulled some up out of my garden two years ago and thought it was really quite tasty. You wouldn't need to buy it around here, it grows like crazy!

Wow, I would have never know that purslane was a vegetable! It sounds too close to porcellana, as you were saying. I really want to try the salad you point at from 'Almost Turkish recipes'. hopefully I find the purslane somewhere here!

PS - You've just been tagged in return to your previous tag. :)

Learned something new today :)
Thanks Simona.

It sounds like something I should know...but I don't. Time to get out the dictionary (the French one) to see if I can find it!
I like stuff with so many uses...

I am also hoping to find it growing in some corner of my garden, Peter, but so far no luck.

Lucy and Kalyn, I am envious. I have weeds of all sorts in our garden: where is purslane, when you want some?

Marta, I don't think I have ever seen it at the BB, but maybe at a farmers' market you'll find it. Tag received.

It is fascinating to see a weed become a star, jj.

You are welcome, Lori Lynn.

Katie, according to my dictionary, it is called pourpier in French. Does it ring a bell?

I never heard of or tasted porcellana before. Very interesting.

Very interesting post. I think this grows wild around my area; or am I thinking of lamb's quarters (which can also be eaten)? This makes me think again about planting some nasturtiums; I love how you can use the flowers and the peppery tasting leaves in salads.

Like Peter, I discovered this in Greece, where it's called "glystritha." Although I've since eaten the weedy stuff from my garden, the purslane I ate in Greece was a domesticated version with larger stalks and leaves that are easier to clean. Seeds for this are available from many seed houses. It's quite easy to grow.

Hi Paz, I hope you can find some in a store and try it.

Lisa, according to my dictionary, lamb's quarters = pigweed and it is a kind of amaranth. I like nasturtiums too.

Thanks Lulu, for the information: that's a nice name. I actually just saw seedlings at the market and I am considering adding some to my tiny vegetable garden.

you need to find seeds and plant them late spring. it does not grow early spring

Thank you Sunni for the advice.