A little while ago, I had dinner with Marta, An Italian in the US, at her new place. In the kitchen, I saw a small bag of anice stellato and then and there I decided I would try and make gelato with it.

I saw a few recipes where star anise was paired with vaniglia (vanilla) and that made sense, so I did the same. The basic plan was to use less vanilla than I usually do in my gelato alla vaniglia, infuse the milk with both vanilla and star anise, but keep the former for a longer time, to balance the latter. This theoretical algorithm was translated into the following recipe, which is based on the recipe for vanilla ice cream that I am currently using (such recipe is a work-in-progress and therefore it is subject to change).

In the morning, warm up to just below boiling point 1 and 1/2 cups of non-fat milk with 2 tablespoons of agave nectar, 1/4 cup of whole star anise (8 pieces or so) and 1/3 or 1/2 of a vanilla bean (baccello di vaniglia) split in half lengthwise to reveal the tiny black seeds inside. Note: I am currently using vanilla beans bought in bulk (three dozens or so) that are significantly less flavorful than the ones I used to buy, individually or in pairs, from local stores. Hence, I used half a bean. Had I used the "old" kind of vanilla, I would have cut 1/3 of a bean. Remove from the heat the saucepan with the milk, cover it and let it cool for an hour. At this point, retire the star anise, but not the vanilla bean, then make the custard.

Beat 1 extra-large egg and 3 yolks with a 1/4 cup of granulated sugar until the mixture is bubbly. Slowly add the milk to the beaten eggs, then pour the mixture back in the saucepan and put on the stove over low heat, stirring. When a film forms over the back side of the stirring spoon (I use a wooden one), draw your finger across. If the line stays clear, the custard is ready. (If it overheats, it will curdle.) The saucepan goes straight from the heat to a cold water bath: keep stirring the custard to bring down its temperature. When the custard is cool, cover the pan and place it in the fridge until thoroughly cold. 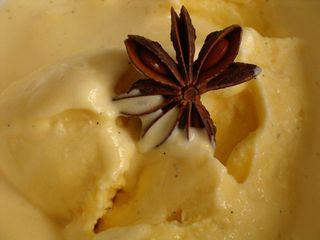 In the evening, when ready to churn, take the custard out of the fridge, add to it 3/4 cup of chilled heavy whipping cream and mix. With a spatula, retrieve the two halves of the piece of vanilla bean and scrape the seeds, then mix again and finally pour the custard into the ice cream maker. Let the machine run until its content reaches gelato consistency, soft and creamy. Stop the machine, scrape the ice cream from the sides and bottom of the machine bowl, scoop and serve immediately.

The dose of star anise and vanilla that I chose worked well: both flavors are detectable and neither overpowers the other. And the smell is divine. A final note: the flavor of ice cream depends heavily on the ingredients. I use organic milk and cream (latte e panna) and pastured eggs, whose dense and deeply-colored yolks make the ice cream shine like a star (stella).

This recipe is offered to Susan of Food Blogga as my contribution to Beautiful Bones, an event she launched to spread awareness about osteoporosis, a very important health subject. May is Osteoporosis Awareness and Prevention Month.

Posted by Simona Carini on May 25, 2008 in Dessert, Recipe, Special Event | Permalink

Oh, star anise and vanilla sound extraordinary. I think you are a genius! Maybe I would have mine with an espresso...Thanks for dessert, Simona!

This is awesome! I love to be in the kitchen to watch you make this.

Rich and dreamy. Lovely flavors and texture, and a nice treat for our long holiday weekend.

So cool! Now, did you keep some for the person who gave you the anice? :) :) Just kidding. :) I can actually try this myself, now!!!
Grazie per la ricetta e a prestissimo.

Did you know that anise is one of my favorite flavors? I love it everything from sweet biscuits to savory tomato sauce. And your gelato with vanilla bean as well sounds heavenly, Simona. This is one beautiful and delicious bone-building recipe! Grazie!

PS-I really appreciate your tip about running your finger across the custard to test for doneness. That's great!

Thanks, Peter. It is a nice result.

Thanks, Lori Lynn. You encourage me to explore more pairings.

Maybe, one day, you will, Paz.

Thanks, Susan: I like the adjective "dreamy" applied to it.

I will make you some soon, Marta.

Prego, Susan. It is my pleasure to contribute to your event.

Simona, I want to taste this!!

If you visit me, Marie, I'll make sure to make some to celebrate the occasion.