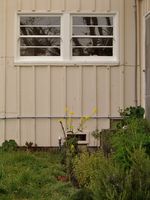 [cliccare il link per andare alla versione in italiano] The inspiration for this post is provided to me by Elga of Semi di Papavero (poppy seeds) Italian blogger and fellow Daring Baker, who a little while ago asked us to show what we see from our kitchen window. Kitchen in Italian is cucina. The word comes from the late Latin cocina, a variant of coquina, from the verb coquere, to cook. From the same verb comes the Italian cuocere, to cook in the sense of applying heat to foods to prepare them for eating, as in cuocere la pasta. To describe... Read more → 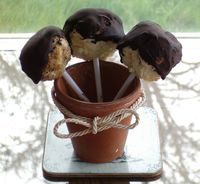 The literal translation into Italian of cheesecake would be torta di formaggio. I decided to leave the original word in the title, because it indicates a specific dessert and I have seen it used by Italian food bloggers. Su bastoncino means on a stick. A gelato su bastoncino (or gelato su stecco, where stecco also means stick) is a Popsicle made with ice cream. If made with ice, it would be a ghiacciolo (literally, icicle). As it usually happens, this month's Daring Bakers' challenge was an adventure, compliments of hosts Deborah of Taste and Tell and Elle of Feeding My Enthusiasms.... Read more → 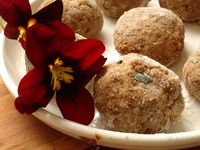 Every now and then I look at the searches people were doing when they arrived on a page of my blog and I feel kind of bad when I realize that they could not have found what they were looking for. This post was inspired by the unknown visitor who landed here while searching for the pronunciation of the word cucchiaio. Posata is the generic name that refers to any one of the eating utensils. Posate (flatware or silverware) is the plural. The basics: coltello (knife) cucchiaio (spoon) forchetta (fork) Posate with a specifier is also used to describe serving implements,... Read more → 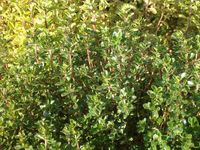 In Italian we use the same word to refer to thyme, the beloved herb, and to thymus, the lymphoid organ located behind the sternum. I will devote the rest of the post to timo, the herb. The genus Thymus, family Labiatae, contains many species. I planted two of them in my little herb garden: Lemon Thyme (photo on the left), and German (Winter) Thyme (photo on the right). I also have some Silver Thyme in a big pot in front of the house: its leaves have a silver rim. I love thyme and I use its tiny fragrant leaves often. They... Read more → 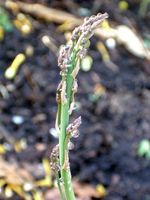 Asparagus officinalis is a perennial plant, whose tender shoots (or spears), also called asparagus, are eaten as a vegetable and, as it is well known, much appreciated. Asparagus have actually been prized since ancient times. The aerial stems of asparagus arise from rhizomes, which, together with the roots, constitute the underground portion of the plant. The Italian words are asparago (the plant; plural: asparagi), turioni (the edible shoots; singular: turione), rizomi (rhizomes; singular: rizoma), radici (roots; singular: radice). I must admit that I have never heard the word turioni in everyday language: I have always used asparagi to refer to the... Read more → 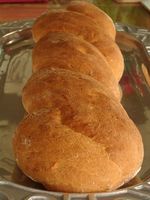 'Fresh herb twist' is not the literal translation of pane alle erbe, but it is the one chosen by Daniel Leader, author of the book from which the recipe came: Local Breads, Sourdough and Whole-Grain Recipes from Europe's Best Artisan Bakers. I have recently become interested in developing my bread baking abilities, an interest fostered by a couple of recent Daring Bakers challenges. Thanks to my dear friend Christine, I learned about this book and, now that I have it, I have started to use it. For my first sampling of the book, I chose an Italian bread that I had... Read more →