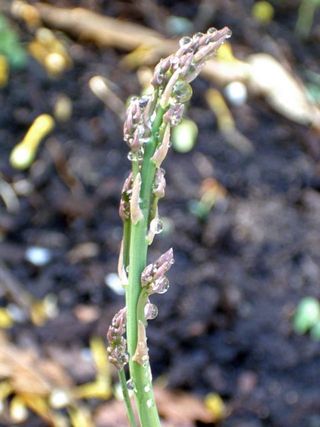 Asparagus officinalis is a perennial plant, whose tender shoots (or spears), also called asparagus, are eaten as a vegetable and, as it is well known, much appreciated. Asparagus have actually been prized since ancient times. The aerial stems of asparagus arise from rhizomes, which, together with the roots, constitute the underground portion of the plant.

The Italian words are asparago (the plant; plural: asparagi),  turioni (the edible shoots; singular: turione), rizomi (rhizomes; singular: rizoma), radici (roots; singular: radice). I must admit that I have never heard the word turioni in everyday language: I have always used asparagi to refer to the vegetable. Punte d'asparago are the tips.

A final reference to words: asparagina (asparagine) is an amino acid found in many proteins that is present in large amounts in some plants, such as asparagus. "The first amino acid to be isolated from its natural source, asparagine was purified from asparagus juice in 1806."

Besides the green variety, there are also white and purple asparagus. In my mind, asparagus are the harbinger of spring. When I was a child, we would eat asparagi about twice a year. Hence, to this day, having asparagus maintains an aura of excitement reserved for special occasions. Asparagi would be available at the fruttivendolo (fruit and vegetable store) for a brief period, then disappear, like a dream at dawn, until the following year. My mother boiled asparagus briefly and seasoned them, still warm, with lemon juice and olive oil. A few times in my life I have had frittata con gli asparagi selvatici (with wild asparagus, Asparagus acutifolius): my aunt Lucia sometimes received them as a gift from someone who had picked them on the hills around her village. 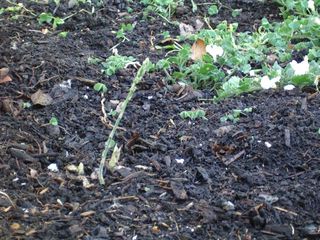 The abundance of asparagus in California is almost intoxicating, and whenever I cook them (oven-roasted asparagus sprinkled with toasted sesame seeds are a favorite dish of mine), I cannot stop eating them. Not long ago, however, I got to do something special with asparagus: I planted a bunch of them in the community garden in whose maintenance I have been involved for almost two years. My gardener friend told me to ask for asparagus roots at the nursery and I bought some of several varieties. When we planted them, I did the shoveling (which made me aware that I need to improve my shoveling skills), then placed each crown (rhizomes + roots) in its newly dug home and it was a bit of a challenge, as it was nothing like transplanting a seedling: the roots were quite long and the whole crown needed to be underground. I tend to be quite pessimistic about my gardening skills, so when, a few weeks later, I saw an asparagus shoot, I was ecstatic. 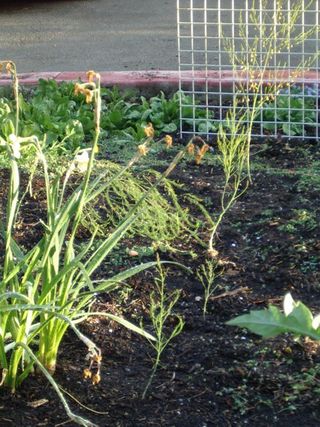 I read that it takes up to 3 years for crowns to develop enough to begin producing shoots. Once they do develop, however, they can produce for up to 20 years. So, at this point, I am focused on seeing signs of well-being of the plants. I want them to be happy in our garden. I love looking at the few asparagus that have produced shoots. Since we did not harvest them, some are now at the flowering stage, which I had never seen before. The spears have expanded into branched, modified stems, the cladophylls, which resemble and function as leaves (while the true leaves are scale-like structures at the tip of the spear and down the stem). There are also tiny flowers. Everything is delicate, almost ethereal about asparagus, which means that taking photos is a real challenge. In the image on the left, for example, the daffodils are predominant, but then you can see several asparagus, including one with flowers (background, right) and one that toppled over, due to its weight (background, left).

This is my entry for Weekend Herb Blogging, a food blogging event started over two years ago by Kalyn of Kalyn's Kitchen and hosted this week by Bee and Jai of Jugalbandi's fame. Here is the roundup of WHB #128.

Hooray. I think that's very exciting that you're growing asparagus. I've never tried it, I think it's too cold here in the winter for it to survive, darn. You'll have to keep us posted about how it's doing.

that is fascinating, simona. i would love to see updates on how your asparagus plants are doing. and asparagus with sesame seeds is something we'd love to try. thanks for your great entry.

Spring just wouldn't be spring without the bounty of asparagus. The wild stuff I can only dream about...lovely work!

Though the plants take a few seasons to establish, one day, Simona, you will have more asparagus than you will know what to do with! I applaud your gardening efforts; I know you will enjoy the bounty. I love the spears w/ sesame seeds, too. I add just a little toasted sesame oil and a touch of sea salt, but they are luscious with the simplest treatment, too.

Wow, thanks for the great information. I also love asparagus in every form I've ever encountered -- green, white, wild, etc. Best wishes on the success of your garden this year. How exciting to wait for these beauties to debut!

I'm with you, I love them roasted,and I can't stop eating them!Sesame seeds sound good. Hope your garden is a big success!!

I think it's exciting you're growing asparagus, too! Only recently I've learned to love them. Yum!

What a great post. I ADORE asparagus, too. How wonderful that you have it in your own garden! They truly are a harbinger of spring. I'm hoping to get some from local farmers around here soon.

I envy your asparagus patch :)

I really don't know Kalyn, about asparagus and cold winters. A few plants would sure look good in your gorgeous garden.

You are welcome, Bee. I will post updates on the asparagus.

I agree, Lucy. My aunt had a whole repertoire of wild vegetable cooking: I wish I had learned more from her!

Thanks Susan for the encouraging words. Toasted sesame oil and sea salt sound like great additions to the simple dish. I love the contrast of textures.
Thanks Manju. I agree with you: whatever their color, asparagus are good.

Thanks Marie. Indeed, stopping is quite difficult once you start eating asparagus.

Hi Paz. I am glad you joined the asparagus-lover party.

Hi Lisa. I hope you get some soon. Spring is not quite spring without asparagus.

Thanks Maryann. We'll see how it evolves.