Not long ago I made spaghetti alla carbonara and in that post I mentioned an article in the New York Times on guanciale. The article starts by mentioning pasta all'amatriciana: when I read it, I did not know that I would be soon making it.

The inspiration came from finding Niman Ranch guanciale at The Pasta Shop in Oakland. I bought some and decided that I would use it to make spaghetti all'amatriciana. I remember eating bucatini all'amatriciana, but I am not a fan of bucatini and prefer spaghetti. As mentioned in the NYT article, some people consider spaghetti closer to the tradition. The way I see it, you can choose. I don't have a family recipe, but I am on the side of the onion-less party. My list of ingredients, besides spaghetti, includes guanciale, pomodori and pecorino. 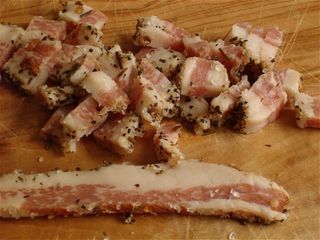 For my rendition of the dish I cut 1/4 lb of guanciale (sliced to my specifications at the store) into pieces (see photo) and placed them in a frying pan previously sprayed lightly with olive oil and warmed up. I cooked the guanciale for a few minutes, then removed it from the pan with a slotted spoon and placed it in a small bowl. I then added a 28 oz can of chopped tomatoes [see update below] to the pan and 1/2 teaspoon of red pepper flakes. I cooked, uncovered, for 10 minutes, then added the guanciale to the tomatoes. I set the heat to low to keep the sauce warm while the pasta cooked.

I brought a pot of water to a rolling boil, added some salt and tossed a pound of spaghetti in it. Shortly before the pasta was ready, I adjusted salt and pepper in the sauce and prepared 1/2 cup of freshly grated... I should say pecorino, but I had some aged goat cheese and experimented with that instead. I drained the pasta and poured it in a bowl that I had kept warm, added the cheese and then the sauce while mixing.

I was pretty happy with the result. The sauce made with chopped tomatoes was a bit too watery, so next time I will try a different kind of tomatoes. Also, I will use pecorino. Update: I made the recipe using a 28 oz can of ground, peeled tomatoes and the result was more to my liking.

The two photos that I took of the final result where unusable. Fortunately, Lisa of Champaign Taste made the same dish using pretty much the same recipe, just a different kind of pasta. You are therefore invited to read her post and admire her bucatini all'amatriciana.

As Lisa and I were exchanging notes after discovering that, unbeknown to each other, we had both made pasta all'amatriciana, the invitation arrived to participate to Festa Italiana, an event organized by Maryann of Finding La Dolce Vita and Marie of Proud Italian Cook. It is a favored dish in my long list, sure to please the party crowd, and so that's what I am bringing.

What a tag team you two are! haha. Great dishes, both. Glad you are joining us :)

Great minds do think a like! Both of you making the same dish! and a traditional, delicious one at that! A fantastic addition to our "Festa Italiana" Thank You!!

An interesting NY Times article and an amusing debate about a pasta dish.

I would assume with onions & garlic absent, very good quality sauce would have to be used.

I'll be on the lookout for this type of bacon.

You know, I really do miss bacon in all it's varieties...sigh...but I live vicariously through others words and feasts nowadays.

I often wonder why meals don't look nearly as good as they taste...words suffice in this case!

Our pleasure, Maryann. We had fun preparing for this.

You are welcome, Marie.

You are right, Peter, there is an interesting subtlety of flavor here.

Hi Lucy. Food photography is hard, especially when your dish cannot be made to wait, like this one.

As you mentioned in your comment to me, this was fun. I'll have to try making the pasta without even the onion, as you did.

Your guanciale looks peppered; is that traditional for guanciale, do you think? Mine was not.

That sounds excellent! I won't even tell you what I put in my (bastardized) version... Maybe I should call it something else, hehehe

Hi Lisa. Guanciale is made in many parts of Italy and I expect regional differences in the curing process. In my area of origin, the meat is rubbed with salt and pepper.

This spaghetti dish is perfect for the event. We are all going to be busting at the seams:D

What a great looking pasta dish. Is the guanciale available up here?

So glad I could hear you pronounce guanciale!

I am afraid so, Valli: there will be a lot of food.

I looked for it recently at Roy's but did not see it. Maybe if we ask them, they may get it.

It's a nice-sounding word, I have to say, Lori Lynn.

I cannot believe you found guanciale! I have been looking for it for quite some time. Thank you Simona.

Ciao Andrea. Now you know where to go.

Hi there! I see you've had food and fiction carnivals in the past, and this post of yours reminds me of the perfect Amatriciana pasta, according to a thug in Giampiero Rigosi’s Night Bus, which I excerpted here:
http://fictionfood.wordpress.com/2009/03/18/amatriciana-noir/
If you ever cook this one up, please send a bit to us! :-)

Thanks for your comment, Fëanor: I enjoyed reading the post. It sounds like Garofano is quite opinionated about amatriciana. I am not sure I would want to have a discussion with him.

Simona, This entry has really made me consider the versatility of the humble spaghetti. I will be making this as a supper to make me smile during an otherwise dull working week. Unfortunately i will have to substitute the guanciale for simple pancetta, as I'm unable to get it in these parts of the world.

If you have some spaghetti in your pantry, you'll always be able to make dinner. Even with the simplest of dressing, a plate of spaghetti is very satisfying. I hope you try the recipe and it is all right to use pancetta, if that is what you can find. I have another spaghetti recipe that I am planning to post soon, so stay tuned.