Biscotto is a word of Latin origin that means twice-baked: the dough is baked, then cut into slices and baked again. From describing a cooking procedure, the word biscotto came to indicate a baked product, crunchy and rather dry in texture. Nowadays, biscotti are not necessarily twice-baked 1. In Italy, you can find shelves full of biscotti in grocery stores: frollini, novelllini, petit, oswego (or osvego), plus a host of brand-specific names. 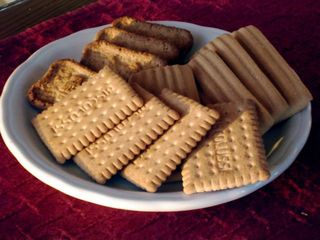 What do we do with them?

He opened the refrigerator and pulled out a liter of milk, splashed some into a pan, and set it on the flame to heat... From the cabinet he pulled down a bag of sweet biscuits they bought for the children and peered into it to see how many were left.
When the coffee was finished boiling up into the top of the double pot, he poured it into a mug, added the steaming milk, spooned in less sugar than he liked, and went to sit across from Paola.
[...]
"Yes, my treasure," he fawned. He let go of the cup and pushed it toward her. When she had taken another sip, he extracted a biscuit from the bag and dipped it into the coffee.
"You are disgusting," she said, then smiled.
"Simple peasant," he agreed, shoving the biscuit into his mouth.
Paola never talked much about what it had been like to be raised in the palazzo, with an English nanny and a flock of servants, but if he knew anything about all those years, he knew that she had never been permitted to dunk. He saw it as a great lapse in her upbringing and insisted that their children be allowed to do it. She had agreed, but with great reluctance. Neither child, he never failed to point out to her, showed grave signs of moral or physical decline as a result. 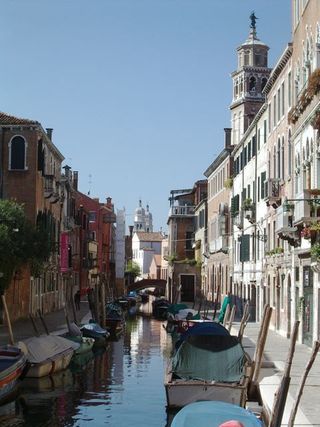 The 'he' in the excerpt is commissario Guido Brunetti, and the lines are from "Death at La Fenice," the first of the novels by Donna Leon that have Brunetti as protagonist and Venezia as setting. I must admit that it was the latter characteristic that enticed me to get hold of the book. I have, in fact, a deep passion for the city on the lagoon (laguna), for its beauty, which defies description, for its magical atmosphere. A glorious setting is certainly not enough to make a mystery intriguing.

I enjoyed "Death at La Fenice," not only for the setting, but also for the characters (including Paola, Brunetti's wife), for the way the story unfolds, and for how the climax is reached (which I found quite nice). Reading "Death at La Fenice" was as satisfying as inzuppare i biscotti nel caffelatte o nel tè (tea).

In the scene described above, which made me laugh out loud in recognition of a connection between me and the commissario, Brunetti indulges in biscotti dunking at the end of the day. In my childhood, that ritual was more connected to breakfast or to the afternoon snack (in which case the liquid of choice was tea). The alternative accompaniment to the morning caffelatte was pane e marmellata (bread and jam, usually home-made). Nowadays, I indulge in biscotti eating (i.e., sans liquid) at the end of the day, my breakfast habits having taken a different turn. I consider my love for biscotti an aspect of my Italian heritage and I appreciated Donna Leon's vignette featuring it.

When I moved to California, I did not find in the local stores any of the biscotti I was used to eating. On the other hand, I found plenty of 'biscotti,' variations on the theme of a twice-baked product that up until then I had called cantucci. These delicacies are often offered as dessert in Tuscan restaurants, paired with vin santo, a wine made with grapes that have been slightly dried to concentrate the sugar. Dunking cantucci in vin santo is a distinct option, considered necessary by some.

After trying a few times to eat biscotti and finding them not to my taste, I decided to develop a personalized recipe. Biscotti (and biscotti too) make a great snack, and are therefore a pleasant companion during hikes and other outings.

Preheat the oven to 350 F. In a mixing bowl, beat eggs with sugar until bubbly, then add butter and beat again for a few seconds. Add in succession the flours, the baking powder and the vanilla extract, stirring with a wooden spoon after each addition. Add the chopped chocolate and almonds. Turn the dough onto a floured surface and knead it for a few minutes until the butter has been incorporated into the dough. Add 1/4 cup all-purpose flour as needed to prevent sticking, a bit more if necessary, but no more than 1/3 cup.

Divide the dough in half and roll each piece until it is about 12 inches long, then move it to a baking sheet lined with parchment paper. Flatten each log with your hand so that it is about 3 inches wide and 1/2 inch thick. Use one big sheet or two small ones. The first baking lasts 25 minutes. The logs will rise a bit and turn light brown. Take the sheet(s) out, turn the oven temperature down to 300 F and let the logs cool for 10 minutes or so. 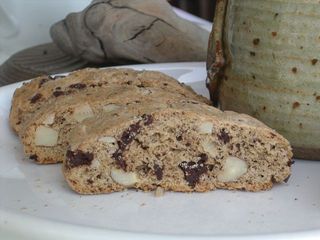 With a bread knife cut the logs into slices no more than 3/4 inch thick. Move the slices back onto the cookie sheet, at least 1/2 inch from each other, standing up. Bake the slices at 300 F for 14 minutes or until desired crispness. Check the biscotti: If the bottom is becoming dark brown, stop the baking, otherwise continue for two more minutes, then check again. When done, take the biscotti out of the oven and let them rest for at least half an hour.

Fortunately, I did not have to give up my indulgence in biscotti and my production of biscotti was greeted with appreciation both at home and elsewhere. The result it that biscotti can usually be found in a cupboard in my kitchen and biscotti in a container on the kitchen counter. Il commissario Brunetti avrebbe l'imbarazzo della scelta (would be spoiled for choice).

As you may have guessed, this is my entry for Novel Food #3, a seasonal literary/culinary event that Lisa of Champaign Taste and I are co-hosting. The deadline for sending us your literary-inspired culinary creations is Saturday March 22, 2008, 9 am (Pacific Time).

This post contains my portion of the roundup and also a link to Lisa's portion.

What an interesting post. I never knew about American vs. Italian biscotti. Your biscotti look really great, with those chunks of chocolate and nuts. I'll have to try making them sometime.

I also enjoyed the passage from Leon's novel. And -- dunking is the best! (Loved the photo taken in Venice, as well; it makes me want to be there.)

I love the ritual of dipping biscotti in coffee, very civilized.

Thanks Lisa. They are really good, hence rather addictive.

I am with you, Maryann.

I agree with you, Peter.

As I read your post at 8:45 this Saturday morning, I wish, I wish, I had some of your biscotti to go with my coffee!

Glad you didn't have to give up your Italian biscotti indulgence. ;-)

I am a great fan of biscotti, but I didn't know there was a difference between American and Italian. I will have to try yours to see what authentic biscotti should taste like!

Your book has been added to my reading list too. Thanks for the review!

maledizione! I FORGOT another time, I really wanted to participate this time. I'm getting more and more fed up with myself....

I wish I could make some materialize in front of your coffee cup, Lori Lynn.

Paz, I am wondering what I would find if I were to roam around stored in NYC.

Hi Mary. I developed the recipe to suit my personal taste. I like keeping my baked goods low-sugar, which is certainly a distinctive quality.

Dear Ilva, you are certainly forgiven and, please, don't get fed up with yourself. Are we going to get a slice of your pastiera?

i don't like biscotti - i've only eaten it in california. but i love the sound of your recipe. it's been bookmarked.

Hi Bee. My version is not very sweet and you taste almonds and chocolate a lot. Let me know if you give it a try.