spianatoia e matterello / kneading (or pastry) board and rolling pin 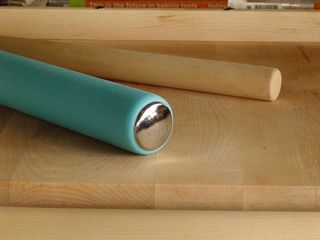 Spianatoia and matterello are two important items in my mother's kitchen. She mostly uses them to make pasta all'uovo (egg pasta), one of her specialties. In the kitchen of my childhood, when not in use, both items were inserted in the kitchen table, underneath the table top, like special drawers. Only recently did I discover that my mother had that table and its wooden add-ons custom-made. When we moved to a bigger apartment, she left the kitchen table behind, but not the spianatoia and matterello pair. Since she could no longer store them in the place that had been built for them, they found a new home in the space behind the kitchen door. And, to this day, that is where they are.

At my aunt Lucia's house, we occasionally used the spianatoia (called spianatora in dialect) to eat polenta. My father told me that my paternal grandmother Caterina cooked polenta in the paiolo, a copper cauldron that hung from a thick chain inside the fireplace. When the polenta was ready, she would pour it over the spianatoia, spread it into an even layer with a wooden spoon, top it with tomato and pork meat sauce and sprinkle it with grated pecorino and a bit of pepper1. The family gathered around the spianatoia and ate from this very special communal plate by cutting forkfuls of polenta with its topping. The idea is to start from a spot in front of you and then decide in which direction to proceed.

The five siblings (of whom my father was the youngest) would usually start some playful competition, eating as much as possible and carving paths to reach the sausage pieces my grandmother had distributed over the polenta1. My aunt did not use the paiolo to cook polenta, and my brother and I did not care to compete for sausages, but that did not detract from my excitement about doing something quite different from the everyday eating from a small plate.

I grew up taking spianatoia and matterello for granted, partly because other kitchens I was familiar with also had them. As my passion for cooking developed, the need for those two items became acute. Until recently, I have used alternative surfaces in place of a spianatoia, but now I finally have the real thing: a spianatoia made of red maple. It is a lot smaller than the one my mother has: her spianatoia is about 23x46", while mine is 21x28", but it fits perfectly over my working table, and has been there ever since it arrived a couple of weeks ago. I also bought two matterelli, one made of light blue silicone and a wooden one, which is also longer, but not as thick as the one my mother has, which I jokingly compare to a weapon. In case you are wondering, I made the purchase online at Fante's.

1 My father has corrected my childhood memory of this story: my grandmother used only pecorino, and the prizes along the race to eat were pieces of sausages, not a whole sausage. Apologies to the early readers.

Addendum: This post has had the honor of being included in the April 2008 edition of La Voce della Dante (pdf), the newsletter of the Dante Alighieri Society of Washington. I am thankful to La Voce's editor for her kind interest.

Posted by Simona Carini on February 17, 2008 in Kitchen Item | Permalink

I loved reading your post. I could just see everyone around the table! I have never heard of this putting the polenta, etc., onto a big board and everyone eating from it. I love that.

I've been meaning to order a good rolling pin; I really must get on that. And how interesting about the spianatoia. Congrats on your new acquisitions, use them in good health!

Very nice you were able to purchase one, too.

Where would we Italians be without our boards? I use mine everyday for everything. And talk about weapons!..oh! how true! I used to keep an extra behind my front door when at one time I lived in a shady area. I feel bad for any bad guy coming near my door haha.

Thanks Lisa. Polenta eaten on the board is a lot of fun. My husband got it to try once and he loved it.

That's funny, Maryann. I would have done the same.

Wonderful memories! We were introduced to the polenta sulla spianatoia during our residency in Italy, but a friend in Rome who made it for us annually. Delicious, and so much fun to eat off the board!

Hi Valerie and thanks for your note. I am glad you experienced the fun of eating polenta sulla spianatoia.