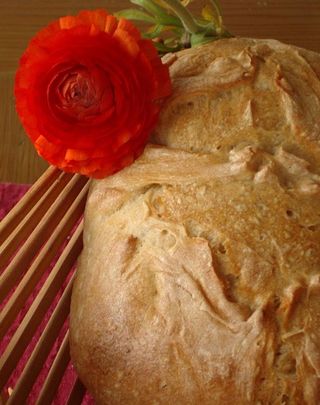 though not any French bread, but Julia Child's French bread, from volume two of Mastering the Art of French Cooking, compliments of Breadchick Mary (The Sour Dough) & Sara (I Like to Cook), who hosted this month's Daring Bakers' challenge.

I grew up eating (and loving) sfilatini. Later on, I discovered that French people call them baguettes. For the challenge, however, I decided to follow this part of the instructions: "Making clean, sure cuts with a large knife or a bench scraper, divide the dough into:

I made the bread twice. As usual, I hit some snags: that's to be expected, otherwise, why would it be called a challenge (sfida)? The dough is quite sticky, so the first kneading was a bit of a struggle. At some point I got nervous and started slapping the dough pretty hard: it was fun for me and good for the dough. Everything went pretty much as detailed in the great instructions that Mary and Sarah provided. The procedure was quite different from others I had followed so far for making bread: the shaping, the flipping before baking, the sprinkling with water while baking. And for a couple of those instructions I accidentally found out what the consequences were of not following: a painful discovery, believe me.

First of all, put a lot of flour on the cloth over which the bread rests before going into the oven. Put more than you think is enough and then add another bit for good measure. I thought I had floured my cloth well but I had not, and the result was a tug of war between me and the cloth that was holding fiercely to the bottom of my beautifully shaped pane. I was able to wrestle it, but the surface showed scars, a testimony to the struggle. This happened during my first try and, when I tried again, I used a lot more flour to prepare the cloth and the bread did not stick to it. 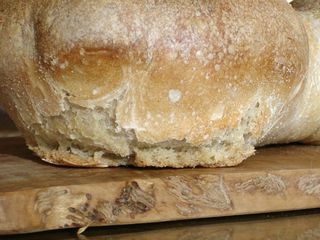 Second, if you are wondering why the oven rack needs to be placed on the top third of the oven, see on this photo what happened to me when I put a rack where it should go, but then put the baking stone with your gorgeous bread on the rack below the right one instead of on it. Fortunately, at the third opening of the oven for the ritual sprinkling of water, I realized my mistake and corrected it, so the rest of the baking occurred with the bread in the right place. As you can see, though, the proximity of the bottom surface to the heat source made it crack. The flavor was not impaired. This happened during my second try and I ascribe the mistake to a bit of hubris (a scholarly way of describing the I-know-what-I-am-doing attitude that can result in how-could-I-have-been-so-silly wonderment when faced with disaster). 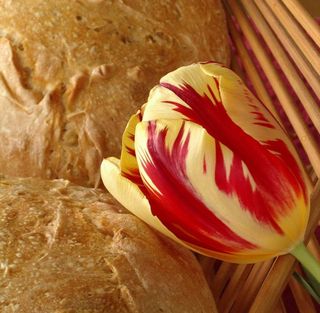 While the flavor was good in both attempts, the first one yielded a prettier result. Having a beautiful bunch of flowers available, I took a pane e tulipano (bread and tulip) photo, and also a pane e ranuncolo (bread and Persian buttercup) one.

Make sure you use the Daring Bakers blogroll to guide you to look at the masterworks that were baked around the world by my fellow daring bread-makers. Thanks to our gracious hosts for the nice challenge.

Sorry to read that you had a little trouble, but a real Daring Baker manages all challenges.

It sounds like you handled the pressure with grace, Simona. And the tulip--how lovely.

This wasn't an easy challenge but you did great. Love the shots with the tulip :)

My second batch got stuck on the cloth as well, but we learn as we go forwards don't
we?
Bellissimo il tuo tulipano!

lovely pairing of bread and flowers.
I especially enjoyed your definition of "hubris" :-)

Maybe next time you might moisten your linen with water and rub it with abundant flour, let dry completely, add a little flour and rub in again. This way your towel is going to be stiff to make trenches and well floured.
Love the tulip pic!

You "rose" to the challenge and your loaves are a thing of beauty. Now on to the next challenge!!!!

Your bread looks delicious and oh, so pretty posing with the flowers :)

Thanks to all of you for your kind words. It was a really fun challenge!

Thanks for the advice, baking soda. It will come handy tomorrow, when I will proceed with try #3.

That's interesting about the heat source being too close causing a crack - I learned something new, thanks :)

You are welcome, Jenny.

Oh, I'm sorry that you had to discover the "not enough flour on the cloth" thing - I did as well! But yours look like they (eventually) turned out great!

I soooooooo had the not enough flour on the towel thing, too. Sigh. The bread tasted great, though. I'm sort of tempted to try again...but not quite yet.

I recommend you try again and you'll see that you will use enough flour. Kellypea, let yourself be tempted.