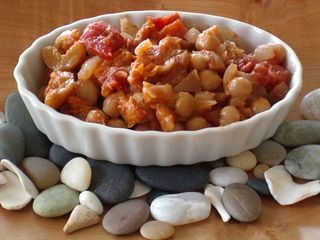 As a child I disliked legumi (legumes) profoundly. Fortunately, my mother would not cook them often: fagioli (beans), piselli (peas), lenticchie (lentils), ceci (chickpeas) were all blacklisted. Then, one day, some time after I moved to California, something happened. I convinced myself to try an Indian chickpea dish at a party and thought: why has nobody ever offered me anything so flavorful before? That was the beginning of a far-reaching rethinking of my position with respect to legumes. As a result, now I love them.

Although my favorite legumes are lenticchie (lentils), probably because they were the least disliked legumes of my early days, here I am proposing a dish with ceci (chickpeas). In case you are wondering, the word cece comes from the Latin cicer. 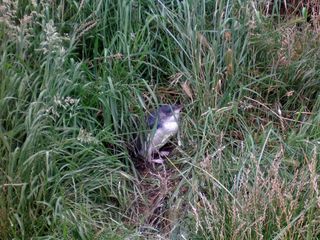 Three years ago my husband and I visited beautiful New Zealand. One day we kayaked in the Kenepuru Sound. It was a memorable day, because, while kayaking, I saw my first blue penguin (the photo shown here was taken a few days later at another location). At the end of the tour, we spent a short time in the Portage Resort Hotel waiting for our guide. I leafed idly through a coffee table book about New Zealand that had some recipes. One of them caught my attention, so I started to jot down notes, but had to run away before completing the transcription. As a result, I am unable to give proper credit for the original recipe: if anybody has any information that could be helpful, please let me know. I am not even sure that my version is based on the complete original, since my notes, written on a scrap of paper, were almost unintelligible by the time I went over them at the end of the day. Somehow, though, my variation on the unfinished theme works as a dish, at least in my opinion. 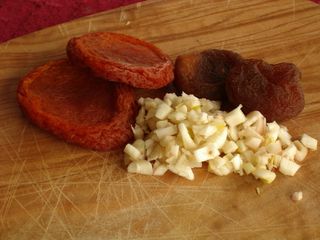 I will describe the recipe using ceci in scatola (canned chickpeas), but it goes without saying that it can be made with chickpeas that you have previously soaked and then simmered until soft (more detailed instructions can be read here). I use organic ingredients as much as possible. Place a cup of diced dried apricots in a small bowl and cover them with hot water. In my most recent rendition I used a mix of albicocche secche (dried apricots) and dried apriums (on the left in the photo). I bought the latter at a farmers' market in Oakland. An aprium is an apricot and plum hybrid.

Spray a rather large pan with olive oil and warm over medium heat. Dice one big onion (cipolla) or two small ones and cook in the warmed pan over low heat with 1.5 teaspoons of ground cumin (cumino) and 1 teaspoon of dried origano (oregano). After about 15 minutes, when the onion is translucent, add two 15 oz. cans of chickpeas, drained and rinsed, one 14.5 oz. can of diced tomatoes with their juice and the diced apricots, drained. Raise the heat until the mixture starts bubbling, then lower the heat and simmer for 10-15 minutes, covered. Add tre spicchi d'aglio (three cloves of garlic), minced, cook another five minutes, uncovered, then turn off the heat, cover and keep warm until you are ready to serve the dish, the sooner the better.

I usually serve these ceci with a side of polenta, so my Italian heritage is still present. My current favorite variation of polenta is made with the addition of 2.5 oz. of Cypress Grove Chevre Natural or Purple Haze at the end. The sweet apricots balance the tomatoes and the creamy polenta embraces all in its soft folds. A note on the photo: I took it the day after I made the dish, so it does not show how I served the dish the night before.

This is my entry for the lovely event My Legume Love Affair launched by Susan, The Well-Seasoned Cook. Here is the roundup.

Simona, the apricots and ceci, very interesting combo and quite inviting to my palete.

Also, i always play your recordings...even if someone curses you in Italian it sounds poetic!

I never tried this combination before, but since I love both dried apricots and ceci I am curious to try this recipe. I also like the nice colors of the finished dish!

I didn't like cecis until I was much older also. I think it was the texture that I had to grow into. But I love them now, and I like your dish, Simona :)

Hi Simona - I just finished a post with cecis although I called them garbanzo beans. Susan's legume event idea is great!
I clicked on your link to apriums, and learned about pluots too. Thanks, learned something new :)

Thanks, Peter. I don't think I'll ever record a curse in Italian, though there are some that are quite interesting.

Thanks Manuela: let me know if you try it.

Hi Lori Lynn. I just saw your post. I used the word chickpea because it is the first one I learned in English. I am glad you found the link interesting. I love fresh pluots, while I have never seen fresh apriums: I will look for them in the summer.

Hmmm... I remember this and it was a delicious as it looks!

Simona, I know I would like this, as I love ceci's! A combo I must try!!

this is a great use of apricots. thanks for the recipe. we cook chickpeas often and are always looking for variations.

That's right, Christine, I think I made it the first time you and Mr CC came to dinner.

I hope you do, Marie, it is really tasty.

You are welcome, Bee, my pleasure.

Happy valentine's day! Thanks for keeping up your wonderful blog!

Chickpeas are one of the best lugumes and can be fixed so many ways - and here you come up with one completely new. It sounds worderful and by using canned ones, which I don't think affects the flqvor negatively; this dish may be quick but it is delicious .

Thanks Nicole for your kind words.

Hi Laurie. Indeed, using canned chickpeas and chopped tomatoes makes the preparation quite short, so provided you have the ingredients handy, this is a dish that can be made at short notice.

Beautiful beans -- and the addition of the goat cheese to the polenta sounds wonderful.

P.S. I love the blue penguin!

As a child and even into my adulthood I didn't like legumes either...but I have turned over a new leaf and eat them with abandon :D

I feel the same way, Valli, like I have turned over a new leaf.