I should start by wishing all of you Buon Anno (Happy New Year), since this is my first post in 2008. We had two intense weeks between December 23 and January 6. We spent Christmas in the Bay Area, then we visited my father-in-law and his wife, and finally we spent a week scuba diving with friends. We did not stay up until midnight on December 31, but we celebrated Capodanno (New Year's Day) in a nice way, immersed in nature and in the company of good friends.

I was planning to talk about la Befana which is celebrated on January 6. It was a holiday when I was a kid, then it was no longer a holiday for a few years (it was decided that the Italian calendar had too many holidays, so some of them were canceled) and finally it was reinstated. The actual religious holiday is called Epifania (Epiphany). If you have never heard of la Befana, and therefore don't know what she looks like, on this page you can see a couple of photos of a modern incarnation of her on a site dedicated to la Befana and to a celebration that occurs every year in a village in central Italy. Then come back here for more.

"La Befana vien di notte con le scarpe tutte rotte" is the beginning of a rhyme about la Befana that has many different variations in terms of how it proceeds. I actually remember only as much as I wrote, which in English reads la Befana comes at night with her shoes all tattered-and-torn. Children expects la Befana to fill their stockings with candies and chocolates if they have been good during the preceding year, and with lumps of coal if they have been not so good. I always found a piece of coal in my stocking, which was black, hard, made of sugar and not particularly tasty. Every year, my father would tell me that the prized items in his stocking were mandarins and oranges, not candies and chocolates.

My father used to recite another rhyme about this day. The first part was in Italian: Pasqua Epifania tutte le feste porta via (Epiphany carries away all the holidays). In fact, the day after la Befana we would usually dismantle the Christmas tree and put away all the decorations. The second part was in the dialect spoken in his village and my writing is an approximation of his pronunciation: poi revè Sant'Antognetto e ne reporta 'n saccoccetto (then Saint Anthony arrives carrying a small pocketful of them). The feast of Saint Anthony the Abbot is celebrated on January 17. What does the saint have to do with a small bagful of holidays? To get the answer you will have to wait until the right day. 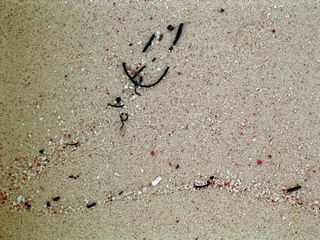 Every year my favorite square in Rome, Piazza Navona, hosts the Fiera della Befana, a colorful fair that I remember visiting when I was a child and was already in love with that elegant urban space. I no longer leave my stocking out on the eve of la Befana, but I am still attached to the old lady that makes children happy (hence the stylized smiley face on the sand, an image taken recently at Point of Sand, Little Cayman island).

Posted by Simona Carini on January 09, 2008 in Sweet | Permalink

Buon Anno to you, Simona.

I've always been fascinated by the way in which Italian children's stories and fairytales feature benevolent witches! Thank you for the introduction.

The old crone and the lump of coal...seems many a Christian culture has them both.

How lovely that you spent part of your holidays in the Caymans. It must have been gorgeous. Happy New Year!

Happy New Year, Simona!
It is kind of you to mention my post on the old girl. I love her!
How adventurous you are going scuba diving. My husband is a dive master and is trying to get me interested, but I like my feet on the ground :)

So good to have you back! Happy new year to you, too. I loved your story; I'd never heard about this holiday until reading your (and Maryann's) posts. Wonderful.

So strange, this "official" taking away and reinstating of the holiday!

Simona, Maryann and you did a great job explaining la befana,thanks.

Hi Lucy, I also find the Befana an interesting character, as a benevolent witch.

Hi Susan: it was very nice and very peaceful.

Wow Maryann, you should let yourself be convinced. Learning is a drag, but, as any diver will tell you, once you try you are hooked.

Hi Lisa. After two weeks of traveling, it feels good to be at home for a while. The Italian holiday calendar has none of the rational 'holidays on Monday' concept of the US one. Maybe one day I will write a post about it.

Thanks Marie: I am glad you enjoyed our stories.

Thanks for sharing this with us! I'm glad you're back posting. ;-)

I'm hosting a Game Night Party event on my blog and would like to invite you to send in a delicious entry if you can! (details on my blog) Hope to see you there!

Hi Mansi and thanks for the invitation: I'll take a look at your site.

While at work I suddenly thought of La Befana.. I must have been 6 or 7 years old in Bologna... prior to emigrating to Australia... memories which I would love to experience again... with my aussie kids and grandkids. maybe ... one day.....

Sitting at my desk in Sydney Aust.. I suddenly thought of La Befana... I must have been 6 or 7 in Bologna .. where I experienced the joy and fun of La Befana..prior to emigrating to Australia. that was many years ago.. perhaps i can do it again with my kids and grandkids.. one day...

Hi Bruno, thanks for visiting my blog. I think it is a great idea to recreate the Befana tradition with your kids and grandkids. As your childhood experience has remained with you, so it will be with them and the tradition will continue.

Now that I finally have a connection with Italians, would you or anyone else, guide me to a recipe on gnocchi dolci. My Mum used to make them years ago. I have an incredible urge for them.
Cheers ..Bruno

I have found a couple of recipes. It will be fun to try them, as I have never had gnocchi dolci.

Hi, I like your article. i have a website about the Befana if you could link to my site i will do the same for you. My Site is www.mybefana.it

Ciao Gianni and thanks for the link. You can see that I added a reference to my post.