There are many variations of this traditional dish, which is fundamentally a way of dressing up stale bread, but I like my father's recipe the best. During my childhood, every August we would spend three weeks in Poggio Catino, my father's native village, located in the historic region of Sabina, north of Rome. Our morning walks in the woods of the Monti Sabini usually ended with a breakfast of panzanella, for which we would carry with us the ingredients. First of all, we brought pane casareccio (homemade-style bread) that was at least one day old. Then we brought tasty tomatoes, ripe, but not mushy, a few leaves of home-grown fresh basil, and a small quantity of olive oil and of vinegar. My father brought salt as well, but only for himself. Even as a child I opposed using salt in general and on tomatoes in particular, because I thought that salt altered their natural flavor.

Panzanella is made by moistening the bread (we used water from one of the springs that grace the ancient woods), without soaking it, then dressing it with the other ingredients. The most important step is rubbing tomato halves over the bread, while squeezing them, so that their juice is absorbed by the substrate, already loosened up by the water. The squeezed tomatoes are then cut into pieces and distributed over the bread surface, as you can see in the photo. 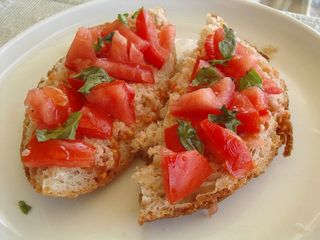 A thread of olive oil and a touch of vinegar, plus the basil complete the oeuvre. Part of the fun for me was that we made and ate panzanella in a rather rugged fashion, since we had no plates or cutlery. In any case, panzanella should be eaten using one's hands as tools. As I mentioned in my most recent post, panzanella was featured also in family picnics, together with cocomero: my brother and I used the latter's rind as natural towelette to wash our hands and face after eating oily panzanella.

Side note: Some people scream at the thought of putting vinegar over tomatoes. You can certainly enjoy panzanella without vinegar. I have always belonged to the vinegar-crazy party and so I add a splash of it to my piece of panzanella.

This is my entry for Weekend Herb Blogging, a food blogging event started by Kalyn's Kitchen, hosted this week by Food Blogga. Here's the roundup of WHB #91.

Oh, I just love this post, Simona! Thanks for submitting it to WHB. Growing up in an Italian-American family, I loved to hear my grandmother and my parents talk about the classic "peasant dishes" that they made from stale bread. They would eat it for breakfast by soaking it in milk or coffee as well as for lunch and dinner by soaking it (like you described) in water. Panzanella is one of my favorite dishes. The only thing that would make it better is following your instructions about the tomatoes. I'll be doing it next time I make panzanella. P.S. Balsamic vinegar on tomatoes in a little taste of heaven. :)

I love hearing the way your family made this. It's definitely different than versions I've seen in cookbooks. I am in the vinegar-loving camp with you, but I'd have to have a tiny bit of sea salt too!

This was my favorite word so far to hear the Italian pronunciation, because of course I was pronouncing it differently in my mind, having seen the word so many times!

I guess we all agree about the vinegar. Stale bread was a reality when women baked it once a week, so indeed there are many dishes that use it as ingredient. Bread was basically a sacred food and it could not be simply discarded. Susan, do you remember other dishes you heard mentioned?
Kalyn, I am glad you enjoyed the sound of this word.

I've always wanted to make panzanella. I've never had a chance to make it yet. Soon, I hope. I don't think I'd mind the vinegar. I'd like to try it. ;-)

P.S. I love the photo of your panzanella. Yum!

Thanks Paz. With fresh tomatoes available at farmers' markets it is easier to be tempted. I am planning to try and use some rye bread i have on the counter and see what happens. As for the vinegar, you can start by using just a little bit or balsamic one, which is less strong and see how you like it.

Once again a great dish from years ago. I wonder if today’s dishes will ever hold their own like these. Anyway I too enjoy vinegar and salt on my tomatoes, I remember seasoning every bite from my fathers green house tomatoes. Have you tried it with a balsamic reduction with sugar?

Interesting to read that panzanella is known in your country, John. Balsamic reduction with sugar sounds like concentrated heavenly taste: thanks for the suggestion, I'll try to make it.

Usually I've thought of panzanella as "bread salad," because that's how someone first described it to me. Your version in the photo doesn't look like a salad at all (but it looks delicious). Also, some recipes I've seen have everything but the kitchen sink going in there; your father's version is simple and good. I must try it; thanks for the instructions.

I know I've said this before, but I must say it again: What wonderful memories you have, and you express them so charmingly as stories.

Thank you so much, Lisa, for your kind words. I believe that in Tuscany, panzanella is made more like a bread salad, with the bread cut into bite-size pieces. I object to the everything-but-the-kitchen-sink versions: I think panzanella is really about tomatoes. Let me know if you try my father's version.