The word cocomero comes from the Latin cucumis, while anguria derives from a Greek word. Be aware that in certain parts of Italy cocomero actually means cucumber. The latter's scientific name is, indeed, Cucumis sativus. The scientific name of watermelon, on the other hand, is Citrullus lanatus. In case you hear the word citrullo while in Italy, consider that it is not a compliment.

Humans have been eating watermelons for thousands of years and I believe no justification for this is required. As a child I eagerly waited for summer, when, among other delectable fruits, cocomero was available. Road-side stands selling whole watermelons and/or chilled slices of the fruit are a summer feature throughout Italy. My father likes to engage in pre-purchase watermelon appraisal, a complex activity that comprises specific hand movements and also the cutting of a wedge, called tassello, for the definitive quality assurance evaluation. Cocomero and panzanella (a dish I will describe in the near future) were the classic picnic items of our summer outings. Since panzanella has olive oil among its ingredients, and is eaten with one's hands, cocomero in that context worked also as a cleanser.

The deep affection Italian children harbor for watermelons is reflected in the Italian version of Linus, who, on Halloween night, waits for Il Grande Cocomero. I felt a bit bad for Linus, waiting year after year for something that would fail to show up, because as a little kid I actually had the thrilling experience of holding my Grande Cocomero, as you can see in the photo below. 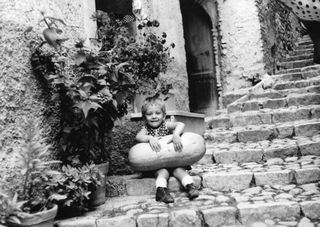 Look at you! What an adorable child. Such an enchanting setting, too - unmistakably Italy.

I have to admit I think I was a cute child. And yes, the cocomero was pretty big, over 30 pounds is what I remember. It was a gift from my uncle and everybody was afraid I would let go of the giant and that it would roll down the steps and hit someone or something. No disaster happened and we actually ate the cocomero.

Oh my God, I adore that photo! It's wonderful beyond words.

I had no idea the watermelon was so popular in Italy. Now I want to have a picnic of panzanella and cocomero this summer.

I am very attached to that photo. I am glad my father liked to take pictures, so I have images like this one. I don't know now, but when I was a kid, there were itinerant sellers of just watermelons. The traveled from village to village with a truckload of them.