If you ever visit my home town of Perugia or its surrounding region, Umbria, this is a dish that I particularly recommend you try. Although torta usually means cake, this particular torta is more like a pizza: a simple water and flour dough is flattened and baked on the testo, a round slab of refractory material that is put on the coals beforehand to make it very hot. This is very much a dish of cucina casareccia (family-style cooking) and different families have recipes with slightly different variations. The best way to eat the torta is right off the testo, cut... Read more → 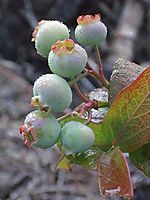 My first experience of mirtilli occurred one day that I went for a hike on the Alps: I saw the plant, was enchanted by the tiny berries, picked some and tasted them. I remember the outcome of the memorable experience: purple fingers, purple tongue and tiny tart explosions in my mouth. At the first brunch I went to, some time after moving to California to live with my (now) husband, I ate what to me seemed mirtilli on steroids. Besides being several order of magnitude bigger, the cultivated blueberries I encountered in the US are sweeter and I like them better... Read more → 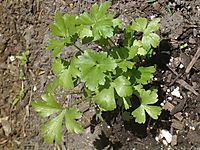 Petroselinum sativum Hoffm., Petroselinum hortense Auct., Petroselinum crispum Hill — apparently, these are all synonyms Prezzemolo derives from the Greek word petroselion, meaning celery of the rocks, and it refers to the fact that the herb can grow on less than hospitable terrain. I find this particularly encouraging, because I consider my little herb garden a rather welcoming place, which means parsley should find adequate accommodation in it. The best known varieties are the one with flat leaves, most commonly used in Italy, and the one with curly leaves, which I had never seen before moving to California. In Italy we... Read more →

A dessert which, notwithstanding its name, is neither English nor a soup. There is no consensus on the exact origin of the name. Some say the English trifle acted as inspiration, while others advocate an Italian birth for the dessert, with English residents in the country playing the role of enthusiastic fans. Zuppa inglese is made by spreading crema (pastry cream) over a base, usually layers of pan di Spagna moistened with alchermes, an Italian liqueur flavored with vanilla, several spices and rose water, whose deep scarlet color provides a nice contrast to the yellow crema and pan di Spagna (which... Read more →

The word sfilatino derives from filo, thread, a reference to its long and narrow shape. It has currency in Perugia, where I grew up. In Milan, where I lived as a young adult, the word baguette is used. Bread is one of those food items (and there are many) whose tradition tends to be very local: as a result, names and flavors vary between different places. There are some exceptions, ciabatta being one of them. I grew up eating a lot of sfilatini, because, before the advent of ciabatta, they were the type of bread my mother would use, together with... Read more →

Ruchetta or rucola is one of those names that are used to indicate more than one thing, which is a recipe for confusion. First there is rucola selvatica, Diplotaxis tenuifolia. Before moving from Italy to The United States of Arugula, I only knew ruchetta as an ingredient of my salad days. Memory #1: both my mother and my aunt Lucia would gather ruchetta in uncultivated patches of land around where they lived, then add a few leaves to a salad of mixed greens to spice it up: and spicy it was! Memory #2: at any of the colorful, noisy and lively... Read more →

slipper worn-out shoe type of bread that is rather flat, comes in different sizes and is roughly rectangular in shape, with round corners. It is particularly suitable for making un panino imbottito, a sandwich. It is delicious and I am glad that it is known in this country too. The funny thing for me is that I remember when there was no ciabatta among the bread options available in the stores in Perugia, then one day it appeared on the shelves and it was an instant success. Even my mother, notoriously change-averse, was quickly converted. In my opinion it is not... Read more →

For no apparent reason, the memory of a maritozzo con la panna just surfaced in my brain. The memory is connected to a latteria in my home town, that sold fresh milk, cream, ricotta and maritozzi con la panna, the best in town. A maritozzo is a soft bun of oblong shape, with a paper thin sugar glaze on top, lightly sweetened and studded with raisins. It can be eaten as is or cut in half part-way and filled with freshly-whipped fresh cream. If you had asked me as a child, I would have probably said that eating a maritozzo con... Read more →

The name of pastries typical of the Sicilian city of Catania: the words are in the local dialect and they mean Saint Agatha's breasts. I am aware that this sounds strange, to say the least, so let me explain. Agata is the patron saint of Catania, and every year the city celebrates her with a complex ceremony, which has a long history and lasts several days, ending on February 5. This kind of devotion is not unusual in Italy. Agata was born in Catania in the 3rd century CE and died a martyr, following her refusal to abandon her faith. One... Read more →

Sicily is renowned for dishes that are a feast for both the eyes and the palate, and cassata is no exception. It is an ancient Easter dessert that, in its dazzling decoration, reflects successive contributions to the list of ingredients, which include ricotta, pan di Spagna, zuccata and other candied fruit, glacé icing and pasta reale (Sicilian marzipan). The most quoted theory regarding the origin of the name mentions the Arab word qas'at, which reportedly describes the bowl-shaped mold used to make the dessert. An alternative theory refers to the Latin word caseus (cheese). A layer of pan di Spagna is... Read more →