To eat comfits The sugar coating is rather hard, so most people let it slowly dissolve in their mouth, then crunch the almond. If the heart of the confetto is made of chocolate, the dissolving process can proceed seamlessly from coating to coated delicacy. Some people prefer to crunch the confetto as soon as it lands in their mouth, an acceptable option that is harder on the teeth and makes a distinctive noise. To celebrate a wedding (in the sense of going to someone's wedding party, not of performing the wedding ceremony) Giving confetti to wedding invitees is such a strong... Read more →

The word derived from the Latin confectum, meaning prepared. The traditional confetto is an almond coated in cooked fine sugar. The result is a white almond-shaped sweet that is given away in sets, hence use of the plural form, confetti, is more common. Confetti are also made with chocolate instead of almonds. They are given away (in small bags or boxes) to family and friends for special occasions, like weddings, christenings, graduations, etc. Confetti for weddings are white, for a baby are gender-colored (pink or light blue) and for graduation are red. Silver and gold confetti celebrate 25th and 50th years... Read more → 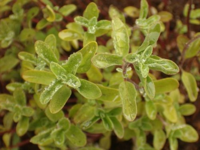 Origanum majorana (Majorana hortensis) Mediterranean people have been using marjoram both as a culinary and a medicinal herb since ancient times. Besides being prized for its flavor, fragrance and curative properties, marjoram was considered a symbol of happiness. Sweeter than thyme and milder than oregano, as seasoning marjoram can be used either fresh (recommended) or dried (if you have no choice). Its fragrance is sensitive to heat and therefore, if you plan to add it to a cooked dish, do so at the very end. Marjoram is perfect over pizza, with vegetables, meat, fish and beans. With such a versatility in... Read more →

A rarely used noun that derived from the vulgar Latin verb brisare, to break. The dialectal version brisa is used in parts of northern Italy and I love the way the word sounds. Briciola (plural briciole) is a diminutive form of bricia and it is commonly used. Briciole usually refers to breadcrumbs, but also to other crumbled items, and even to intangible things, like happiness (una briciola di felicità). Crumbles of butter, flour, fine polenta, sugar and ground almonds make a cake typical of Mantua, called sbrisolona. It is different from a typical crumble, because there is no fruit layer underneath... Read more →

First described by Boccaccio in his Decamerone, gnocchi are considered the first type of pasta ever made: a mixture of flour and water (the flour from wheat, millet, farro) shaped into round dumplings that were then cooked in boiling water. The best-known version, made with potatoes, is fairly recent in historical terms, since potatoes did not become common in Italy until the 1800s. Gnocchi made with other main ingredients are common, like the small Sardinian malloreddus, made with semolina flour, knödel, made with bread that is a day or two old, and gnocchi di ricotta. The strange-sounding word gnocchi traces its... Read more →

Polpettone comes from polpetta with the addition of the augmentative suffix -one. I have never eaten either polpettone or meatloaf, because both are famous for being particularly demanding on our digestive system, a character I dislike in food. This defining trait of polpettone explains the metaphorical use of the word to describe something muddled and boring. Movies and books are at particular risk of being condemned as polpettoni. Click on the button to hear me pronounce the Italian words mentioned in the post: polpettone or launch the polpettone audio file [mp3]. [Depending on your set-up, the audio file will be played... Read more →

The word polpetta comes from polpa, meaning lean meat, with the addition of the diminutive suffix -etta. Polpette can be made with meat or fish and are fried or stewed. My mother makes them with the boiled meat leftover from making broth. She fries them and the result is brown nuggets that are almost creamy inside and crispy outside. The next day she stews them in tomato sauce: what they lose in outer crispness, they gain in flavor with the aromatic tomato sauce. I have never eaten spaghetti with meatballs and had never heard of them until I moved to California.... Read more →

My father always uses a small piece of bread to gather and scoop up the sauce remaining on his plate. As a child, I was taught to do the same, out of religious respect for the food, magnified in my parents by their experience of wartime food scarcity. The expression usually refers to the tomato sauce left on a bowl after eating a portion of pasta, but as a child I had to fare la scarpetta no matter what dish I had eaten. The family tradition is now carried on by my husband, to my father's delight. Scarpetta means little shoe,... Read more →

To make a frittata See, for example, my recipe for frittata di zucchine or an unusual one with roasted peaches. To make a mess Whenever my mother sent me to buy eggs as a child, she would always warn me not to make a frittata, i.e. break some or all of the eggs. At the store they did not use cartons (a great invention, if you ask me) and wrapped the eggs individually in pieces of newspaper, so that they looked like giant candies. The padding provided by the newspaper was often insufficient and I would arrive home with a cracked... Read more →

A dish made with beaten eggs to which usually other ingredients are added (vegetables, cheese, cooked pasta, prosciutto, or a combination thereof), before they are fried in a pan. Half-way through the cooking process, frittata should be flipped to allow even cooking. I recommend quick broiling instead, to avoid a possible catastrophic landing of the half-cooked frittata on the floor. Read more →